The RM27.3bn price tag works out to a staggering RM847m/km and, when completed, it could be the most expensive transit system on a per capita basis in US history. And the Penang government wants an elevated LRT system.

The Penang state government’s project delivery partner, SRS Consortium, tells us that elevated LRT can be built in Penang for RM220m/km.

Penang and Hawaii have some similarities: never far from the sea, a tourist destination; a laid-back atmosphere (fast vanishing in Penang!); an almost similar population size with diverse cultural heritage; and a reliance on cars and to a less extent, buses.

So check out the New York Times’ list of concerns in a feature Hawaii struggles to keep rail project from becoming a boondoggle (white elephant):

KAPOLEI, Hawaii — From the start — when Honolulu officials began talking about building a 20-mile elevated train line near the southern coast of Oahu — there were concerns. How much would it cost? What would it do to the character of a state that has long celebrated its natural beauty and isolation? Can an island in the middle of the Pacific Ocean handle the kind of ambitious public works project one would associate with urban centers like Boston and New York?

“It’s a disaster. In my view, we are worse than how we expected,” said Panos D. Prevedouros, a professor of civil engineering at the University of Hawaii, who has twice run for mayor opposing the project. “We were saying at the beginning we would be lucky if it could be done for $6.4 billion, and people thought we were close to lunacy. We are sitting here today, and we are now computing about $7.1 billion cost.”

“We have become numb to these numbers,” Mr. Prevedouros said. “But it’s very dear for a small place like us, with only like 400,000 taxpayers.”

Over here… already, the figure for the Penang airport area to Komtar elevated LRT appears to have soared. Last year, press reports mentioned a figure of RM4.5bn for a 17.5km light rail route. But like Hawaii’s rising project estimates, the estimated cost mentioned these days for Penang’s 24km elevated LRT (phase 1) has jumped to RM6.2bn (including land acquisition costs). That works out to RM356m/km – or RM220m/km (excluding land acquisition costs).

In the video on Hawaii above, an expert recommends buses and trams along certain corridors for Hawaii as a viable alternative. That’s exactly what Penang’s initial consultants Halcrow (to whom the state government paid over RM3m) recommended.

For the 17.4km airport to Weld Quay route, Halcrow had recommended  a modern tram system – shared at street level along a certain stretch, with a segregated lane along another stretches and elevated along yet other stretches.

This is the Halcrow alignment: 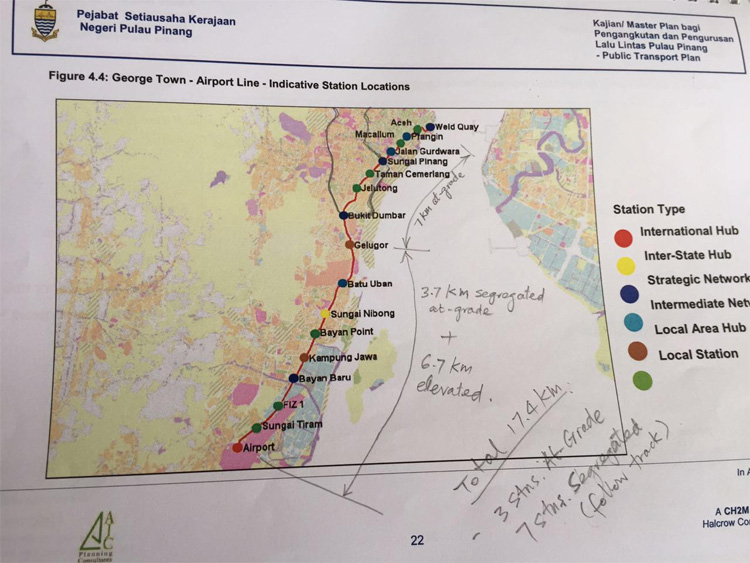 So the bill for Penang works out to be around RM1bn. Too cheap for us-lah! (By comparison, the just completed Kaohsiung street-level light rail system, elevated along certain stretches, in Taiwan works out to RM90m/km.)

Enter SRS Consortium with their proposal for an elevated LRT for a cool RM6.2bn. How nice… so now we can reclaim more land…

Gamuda is the concessionaire for KESAS, LDP, SPRINT, SPLASH and SMART tunnel.

Why not SRS Consortium in which Gamuda is the leading partner proposed to be the concessionaire of the LRT? Because they see it is not financially viable to operate the LRT, hence choose to be paid from the sale of reclaimed land?

Dr Hilmi: We don’t need a third bridge https://sg.news.yahoo.com/dr-hilmi-dont-third-bridge-103104374.html BALIK PULAU: A proposed third bridge to replace the undersea tunnel is unnecessary as traffic flow on the second bridge is still low. Balik Pulau Member of Parliament, Datuk Seri Dr Hilmi Yahaya said the second bridge connecting Batu Maung on the island and Batu Kawan on the mainland was under-utilised as currently the bridge had only 40 per cent traffic volume. “We do not need a third bridge as the population of our state is low with approximately 700,000 people living on the island and one million on the mainland,”… Read more »

Not even the sea tunnel which will cost more substantially than a bridge.
An accountant politician would have done his homework more carefully than to go Lone Ranger.

Penang Transport Master Plan, 1MDB Fiasco etc tend to irritate our minds such that many just feel Let It Be…
like this video says it all :

Tonight we want to re-energise our mind with true kung fu kick of Bruce Lee (+ many readers favourite Nora Miao) on 8TV (astro 708) at 10pm. Anil do tune in at least you get to know why Nora was and is still so famous with Penang Lang ! 🙂

Never heard of Nora. Will check it out!

Last night 10pm a tough decision whether to watch TV3’s Singh Is King or 8TV’s Fist of Fury. Ended watching the kung full kick also to take note of who Nora Miso is.
Bruce Lee a true legend!

Note: the 70s style of courting an innocent Chinese girl is very, very different from today’s.
Now, it’s the other way round!

Unfortunately in real life Bruce Lee succumbed to Betty Ting Pei and died on her bed.

Okay, I think we are veering off-topic now!

how about singland? no over run? more than 0.5M malaisi like pg lang work there
tech no logy transfer back to kg. maybe can potong cost

you mean whole island is heritage zone include airport?

You should say heritage zones should not have motorised vehicles, only bicycles and trishaws.

You cannot make such comment if you drive car.
By definition of heritage there should be no car at all.

Monique
LESS cars then no need new bridges all over.
Penang Forumers should pro less cars on island and most if their concerns can genuinely resolved!

What a potentially car-less suburb in Germany could look like:
http://www.fastcoexist.com/3059264/this-new-car-free-neighborhood-redesigns-suburbia

We have a recalcitrant leader…

Recalcitrant due to overt-worshipping that blinds the minds of worshippers.
Be prepared for knee-jerks from Jerks of Komtar Tower’s See No Evil, Hear No Evil, Speak No Evil of Reverent Niao Kong!!!

You prefer Gerakan e a where time stood still with no development on the island?

You still worshipping (with joss sticks)?
Read properly what others have to say!

worshippers are always persecuted by haters. no freedom to worship. persecutors 110% right. watch for karma

Not related to the above topic .
Just want to say that http://www.malaysia-chronicle.com/ is blocked and
sakmongkol.blogspot.com (ak47) is not accessible or removed.
What and where else i can read? Utusan?

You can install this app on your iPhone/iPad:
https://news360.com/m/
Then set your preference for Malaysian news where those articles from the inaccessible sites are reproduced.