The Penang state government has handed over the keys for a RM80m low- and medium-cost housing project developed by PDC in Sungai Dua. 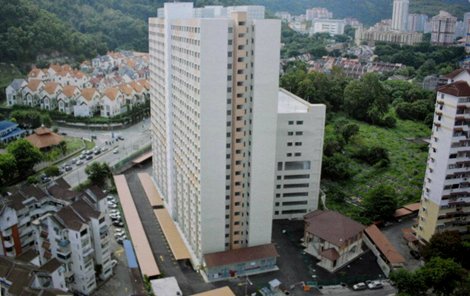 The two 22-storey blocks at Halaman Kenanga have 720 homes:

Guan Eng said his administration has approved 11596 low-cost and low medium-cost units since 2008.

The Auditor-General’s Report 2010 had reportedly pointed out that the state had not built a single low-cost home  between 2008 and 2010.

Housing in Johor is also very expensive, as reported on Sin Chew here:

The first gift of LGe for those who voted for him is a ghetto slum! Can’t image! How after 308 the heart and soul of all the social activists can be blinded by hate and stupidity!

Ah Soon Khor – Very good, damn good – simply the best comment, thinking and solution. So Election coming. Which area are you going to stand? Silly question to ask. Confirm you will be challenging LGE in both state and parliament seat as you have some much power to throw at him.

If not just a blow cow or blow water … only in a virtual world.

After Rifle Range, Macallum, this is another low income ghetto, a typical apartheid housing separated from the rich and famous and sequence into a mere 4.31 acres of land with 712 unit of household. The more than 165 units per acres density is almost double the 87 units per acre as planned by LGe administration. Did the high density development ever help arrest the escalation of property prices over the last few years? There is no policy debate or public participation with regard to these massive increases in development density. In the end the poor like always have been betrayed… Read more »

You said. “Did the poor who truly deserve the low cost unit can ever afford to buy or own a car? Why build a multi storey car parks of 724 lots instead of more low cost units?”

Rifle Range Flats were built without consideration for car parks.
They became an eyesore over the years and were infamous for haphazard parking.
Don’t condemn the poor to an everlasting life of poverty, if the lesson from Rifle Range flats failed to educate you.

The beauty of 2 party system is that if you cannot satisfy people needs then just step down and let other to take over. Now Dap cannot provide adequate low cost housing for the masses. Thus, we can concluded that Dap has let Penangites down this term and not deserving another term.

p/s: If I were LGE, I certainly MALU to announce a mere 200++ units of low cost houses. Only thick face politicians can do so.

Not as thick face as those who dare not debate with Anwar but who give two sen excuses instead.

Ya, I think PR should step down if they fail. However, as of today, I’m recognising more failures of BN during its 50+ years of administrating Penang than the hope I can find in PR. The worst part is BN is getting more recalcitrant, arrogant and racist in addition to being insanely corrupt. So until BN reforms, I guess it would be PR for us for many years to come.

Let us see more of these low-cost housing scheme for the deserving poor and lower middle class on the island and mainland. Many middle class including myself are getting poorer, even working harder like rats more than the normal 9-5 jobs. To still have subsidized housing in this time of run away inflation but stagnant incomes is appreciated and we should let the state gomen know our thankfulness. I used to see this project in progress on my way to work and now that it’s ready for occupancy, shows this state project was carried out by responsible contractors unlike the… Read more »

Yet to come across any news reported from the mass media on this.
BN govt ordered news blackout ?
Congratulations to Penangites and to all the new home owners.
The Selangor state govt also delivered low cost homes and keys were given out.
Also no such news can be found on any bn controlled mass media.
But unimportant event such as launching a fishing competition by the deputy trade minister are widely reported.
Journalist are still under shackles.
All of them are suffering from the “jaga nasi periuk” syndrome.

The Penang project key handing over ceremony was reported on the Star website.

Ah Soon, where are you, any complain?

Your standard of “efficient and effective” is so AMAZING. Just like Ripley’s Believe It or Not !!!

Under your “efficient and effective” standard, we need 2500 years to provide 150 000 low cost houses.

This is the TIME to wait when you GATAL-GATAL voted in Pakatan.

GK : You know what, every time you speak only … come out. Yes … How many low cost house did Gerakan build since the day of Lim and KTK. 40 years to be precise. 50k the most and you call that incredible. bull… please check the record.

Aiyoh, why did you all always take Gelak K so serious, he is always main-main in Anil’s blog.

He is a lonely man out here to irritate the readers.

I believe he pangkal X for Pakatan government on 308 and he will continue to do so, ya Gelak k, very kwai lan you.

PAS ask you to repent. UMNO (supporters) ask you to balik … UMNO BOLEHHH!

Most of all, you believe in your own fairy tales and denials, Gherkin.

Gerakan K, I am no.1 Umno supporter but the way you make your argument really make me wanting to leave UMNO. wah kah kah

Any hardcore supporter will not abandon his party no matter what. For example Abdullah Badawi, Dr. M, Ku Li, etc.

two best words that Gerakan k can carry himself is “Childish and idiot” padan mukalah…..

GK, I’m amaze at you. I’m wondering (if)/how much you are being paid to continue polishing BN. I hope you get more than the minimum wage. It’s a lonely job sitting in front of your pc all day trying to cook some nice stories of your master.

I only have this to say, If BM did such a great job in Penang during its 50 years rule, there should be no poor people waiting for low cost housing.

Answer this with some intelligence and not your usual half corked half baked stupidity.

Gherkin, are you getting a unit?

Under AMMO & Gerakan Barang Naik, he did not get anything because it is transparent, that is why he has always been sore. He just like AMMO & Barang Naik want it under table, over the table and now even the table but LGE say no table whatsoever.

Mistake, it should be under PR he did not get anything because it is transparent that is why he has always been sore

204 low cost homes are not enough for us.

I think Penangites have wasted 4 years by voted in Pakatan. Surely under BN, we can get more low cost houses.

Sze Tho
Reply to  Gerakan K

That’s the best you can do? Looks like you’re running out of ideas…

Gerakan K
Reply to  Sze Tho

Your comment made me so sad. Really so sad.

You maybe a DAP supporter with PhD and millions in bank. But how about other poor people without much formal education and money ??? Let them alone or kick them out of Penang ???

I don’t think joking about providing low cost housing is appropriate. Please respect for the poor ones. It’s state government responsibilities, not only servicing the rich ones by providing RM400 000 houses but they MUST take care of the poor ones.

Sze Tho
Reply to  Gerakan K

“other poor people without proper education”? You are referring to yourself, judging from your posts. Providing low cost housing is good, but no easy feat. The current state gov should be applauded for this latest effort. Arm chair critics like yourself should learn to temper your constant complaints with compliments when it is due. BTW, since when did penang gov provide 400,000 houses for the rich….? Please don’t embarrass yourself. Posting false statements make you look ignorant.

ceekay
Reply to  Sze Tho

In the first place, who started to sell land to developers to sell to foreigners under the MM2H program? Who turned Tg Bungah from secondary development area to primary?

With options of selling luxury apartments at high prices to foreigners, why would developers build for locals?

Plain Truth
Reply to  Sze Tho

If the self declared rent seeker Gerakan K will cease his rent seeking activities, the state will have more money for the poor.

Totally agree. Under BN most of us need low cost housing.

Angry and Fed UP
Reply to  Gerakan K

Gerakan K, explain to us why 204 is not enough? It is a good start, wouldn’t you agree?

You can’t expect miracles in 4 years with most of the State’s budget witheld by the Fed. Gov.

BN has done nothing more than to promote corruption…from every dept./agencies you can think of

Gerakan K
Reply to  Angry and Fed UP

How many of these 150 000 people requesting low cost unit accumulated from the era of Gelakan? How many units did Gelakan built over the years? Haven’t you read the article correctly: it reads “Guan Eng said his administration has approved 11596 low-cost and low medium-cost units since 2008”, this 720 unit is just the beginning. You can be the opposition in Penang, to check and balance, but give credit where it’s due.

The Chinese Sex Legend only knows how to satisfy himself lah.

Gerakan K is right – sudden jump of people needing low cost homes in Penang. These may be the fast-track Banglas/ Indons/Myanmarese and others given Blue IC in 3 weeks of landing in Malaysia?

Under Umno even the cow can stay at condominiums….hip hip hurray…

We don’t blame pakatan when there are criminal activities in pakatan states because we have the police and judicial system. Let the police do its jobs.

I don’t see how your comment is relevant to our discussion.

Well, you don’t seem to be able to see anything, Gherkin. Must be that log in your eye.

Judge for your self who are the criminals.

A judge was awarded a 2.2 billion projects during the judgment of an illegal takeover and police did not act thuggery and violence was committed during a rally.

PDRM – Polis DiBawah Rosmah Mansor ??? The fiasco at Esplanade recently has proven itself.

Citation needed for your idiotic statement. Any proof ???

Haha, minijackpot. Gherkin is getting a little hot. Make sure you don’t become like cavemen cousins.

Gerakan K – you got no shame!

THIS is what LGE does best – delivering politically on tough issues. He is no genius, he is no great speaker but he really delivers on substance that PR can sell politically and urban voters respect. Its really why UMNO-Perkasa/BN has no chance at all in Penang for the next decade. Selangor and Khalid Ibrahim has not done as well but they are keeping pace. IF PR can hold on to Selangor next GE, UMNO-Perkasa/BN is as good as done..

Andrew I
Reply to  rilakkuma

Our Hock None is looking for more Hock to take back the throne he was supposed to have sat on. In musical chairs speak, he wasn’t paying enough attention when the music stopped.