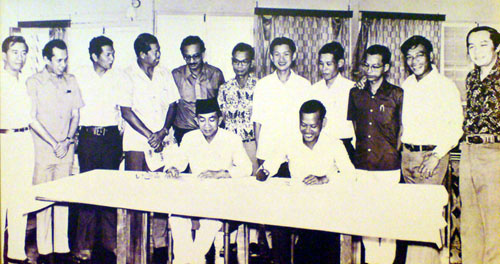 Or how Sri Aman in Sarawak got its name…

In the raging controversy over whether Chin Peng should be allowed to return home, few in the peninsula are aware of the peace treaty signed in 1973 in Simanggang, Sarawak between the then state chief minister, Abdul Rahman Yaakub, and Bong Kee Chok, the director and commissar of Partai Rakyat Kalimantan Utara (Paraku), which was linked to Tentara Nasional Kalimantan Utara (TNKU) and the Sarawak Communist Organisation (SCO). That led to  several hundred communists laying down their arms and subsequently returning to society.

To commemorate the occasion, Simanggang was renamed Sri Aman.

Check out the full story in a Borneo Post report here.

The call by many umno baru leaders to ban Chin Peng from returning to Malaysia is not consistent with their own actions. japan attacked and killed many Malayans during the Japanese occupancy but now the BN govt is more thsn happy to trade with Japan. Indonesia at 1 time attacked Malaysia and killed many malaysians but the BN govt is too happy to work with indonesia in many areas. The issue here is not about Chin Peng or what he can or cannot do. The issue here is about consistency in formulating policies and actions. I think BN should be… Read more »

I add my support for the call to bury all past hatchets and allow Mr Chin Peng to return on humanitarian grounds to his homeland to live out his final years in peace by being at peace with his fellow Malaysians. Communism as an alternative/viable ideaology in Malaysia is, as we all know, now truly dead and buried and is not even a scary spectre anymore. Perhaps someone can start a nationwide petition to gauge what the Malaysian public thinks on the subject before this now harmless aged man passes on and it becomes too late to get him off… Read more »

The reason why many of supported the return of Chin Peng is for humanitarian ground and to put a closure to a bad patch of our country’s history.

The UMNOputras spinned it and claimed it is because we support and planning to resurrect communism. Such is the narrow-minded thoughts of Rice Yatim and Tun Dr M.

Well Chin Peng should be allowed to return to Malaysia since he is a Malaysian and he was only self exiled to Thailand. Why is the government scared? What can a old man like him do? I believe many ex-communist members are still in Malaysia and not exiled nor self exiled. They did not do anything since its fall. Anywya the party is banned right? So why afraid it would re-emerge? Furthermore today’s Malaysia i dont think would support communism. Lets forgive him and work on Moral grounds. Sometimes i wonder why he bothered to go to the courts. He… Read more »