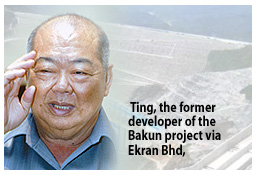 Update: That was quick. An arrest warrant has been issued against Ting Pek Khiing for failing to appear in court to be questioned by creditors regarding his dealings and ability to pay under provisions of the Bankruptcy Act 1967.

Just when you thought this guy had disappeared into oblivion, the former Mahathir blue-eyed boy Ting Pek Khiing, once declared a bankrupt years after his Bakun Dam efforts flopped, thinks Langkawi could be his new playground.

He wants to build about 30,000 expensive condos, commercial centres, and berthing facilities for ocean liners and yachts on reclaimed land in the eco-paradise of Langkawi.

Is this guy dreaming or what? Just because Mahathir is ruling the roost, and especially in Langkawi, Ting thinks he can see this through?

The project will be off the west side of the island. (Hopefully, it won’t be the coast beyond Gunung Matchingchang, which I am told is one of the very few pristine coasts left in Langkawi, where no road or infrastructure has been built.) How will the reclamation of 81ha affect the Unesco listing for the Langkawi geopark, which I think is already on shaky ground now.)

Ting, now 72, once impressed Mahathir by building the Sheraton Hotel in Langkawi in a record 100 days. (See the fall and fall of Ting Pek Khiing.) But take a look at the recent reviews of this hotel, which seems to have changed hands.

Meanwhile, the government had to pay Ting’s Ekran about RM0.7bn to RM1.1bn as ‘compensation’ over Bakun Dam. The failed project was taken over by government-owned Sarawak Hidro and the new civil builder was the Malaysia–China Hydro JV consortium, led by Sime Engineering Berhad of Malaysia (a subsidiary of Sime Darby and Sinohydro Corporation of China). Last year state-owned Sarawak Energy Berhad acquired Sarawak Hidro Sdn Bhd.

As part of the “RM1 trillion” federal government debt, under the debts guaranteed by the federal government, Sarawak Hidro Sdn Bhd has a RM1bn debt due. How was that incurred and who is going to fork out money for that debt in the end?

If Ting wants to build all these high-end condos in Langkawi, who is going to buy all those high-end homes planned under the ‘three islands’ project on 4,500 acres of reclaimed land off the southern coast of nearby Penang Island? The Penang state government is hoping to sell the reclaimed land on these three islands to raise funds to finance SRS Consortium’s exhorbitant RM46bn transport infrastructure proposal.

Even without Ting’s mega plan, the Penang housing market is looking rather “subdued”, to put it politely, of course: 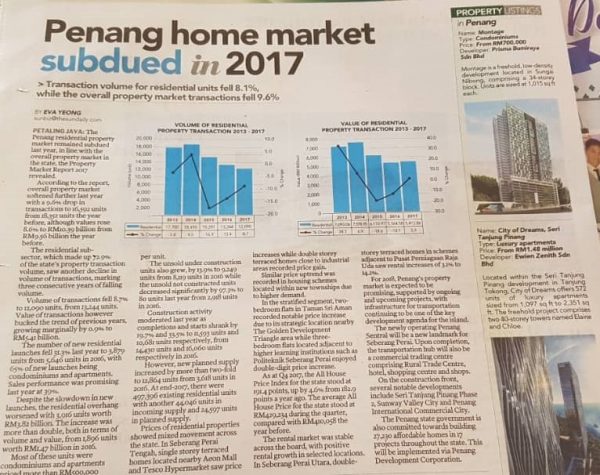 As you can see from this report (above) in today’s theSun, the residential housing market, which makes up 73% of total property transactions, has fallen (in terms of volume) over the last three years berturut-turut.

And “despite the slowdown in new launches, the residential overhang worsened with 3,916 units worth RM3.82 billion. The increase was more than double, both in terms of volume and value, from 1,896 units worth RM1.47 billion in 2016.”

Let me repeat: the residential property overhang in Penang more than doubled last year. And this is the clincher: most of this overhang comprises condos priced at more than RM500,000 – ie way beyond the reach of the vast majority of Penangites.

On the right-hand section of the same report above, you will see a couple of announcements of new property launches. The Montage condos in Sungai Nibong are starting from RM700,000 while the City of Dreams “luxury apartments” are starting from RM1.5m. Even an ‘affordable housing’ project in Bayan Mutiara starts from RM300,000, which would put it beyond the reach of the bottom 80% of Penangites.

And we haven’t even talked about Phase 2 of the Seri Tanjung Pinang project on 760 acres of reclaimed land in Tanjung Tokong and all those new homes in the pipeline.

So, to me, it looks like some people are still in la-la land, fantasising about the property market while in it reality the property overhang in Penang has doubled in one year.

If the idea over in Langkwai is to hopefully provide jobs and improve the livelihood of the people there, it is hard to see what kind of jobs a high-end construction project and a playground for the rich can provide to the ordinary people of Langkawi. Would the environmental impact of this project instead harm the tourism and hospitality sector on which many Langkawi folk rely for their livelihoods?

Already, a petition has gone up asking Mahathir to review Ting’s Langkawi project.

Why build in the first place?

Tan Sri Ting Pek Khiing has been served with an arrest warrant following his failure to appear in court in a suit involving him and his creditors demanding for monies to be repaid.

Ting was due to appear in court to answer questions by creditors on June 7 but did not turn up.

The overhanging unsold properties are having a hard time struggling to find buyers. We Malaysians be mindful the slump is only at the initial stage and will get from bad to worse soon. With so many problems plaguing us and how can Penang be left out? A first few to crumble? Once again, the reclamation land in your Gurney Drive is not going anywhere let alone to be monetised? Therefore, how to find “money” to build the tunnel? Not even the three highways !

Who would buy the 30,000 expensive condos in Langkawi?? Not even those from China!

Greenpeace’s Rainbow Warrior docks in Port Klang to spread environmental awareness https://malaysia.yahoo.com/news/greenpeace-apos-rainbow-warrior-docks-104033131.html Greenpeace Malaysia spokesperson Jacqueline Yew said: “The Rainbow Warrior’s first official visit to Malaysia serves as a platform to announce Greenpeace’s physical presence here as well as to create greater awareness on environmental protection. “We want to engage with local partners and supporters to act against plastic pollution. More than 90 per cent of plastic waste in the world is never recycled because it is non-biodegradable. “We are currently undertaking a plastic scoping research work and we will share our findings with the relevant agencies upon completion. Our… Read more »

A whale has died in southern Thailand after swallowing more than 80 plastic bags, officials said, ending an attempted rescue that failed to nurse the mammal back to health.

Thailand is one of the world’s largest consumers of plastic bags, which kill hundreds of marine creatures living near the country’s popular beaches each year.

Profiteering (greenwashing) is now prevalent even in reusable bags – manufactured to fall apart within a few months, besides polluting you with plasticizers. We need cloth bags of various sizes, but none are available. Even the woven raffia ones are gone.

the hotel that was built in 100 days was called the D’Lima hotel … stayed there at RM50/nett per night… https://t.co/L9EPdthOZk

Now Wee-Wee dare to say this, but did they not know when they got the ‘whipping’, they simply pretended no pains but continuously polished the rotan like an obedient slave? For decades! Of course at a price: $$$cronyism for them, humiliation for the supporting voters.

No pretension: Which brands do Rakyat now prefer – Pakatan Harapan or MCA?

WeeKS is famous for weeping when chips are down, now more pressure to breakdown as opposition BUT the wealth of MCA a contentious matter among members should the party is dissolved.

If there is no foreseeable local market demand for high-end properties, why try harder to build some more? And why itchy-handed trying to build some more in environmentally fragile islands & emerald seas? High time Pakatan Harapan wake up to the follies of property development which left unchecked can adversely affect our natural environment long term & never to be recovered. Will Pakatan Harapan create a new ministerial portfolio for Minister of Green-Eco Environment? As PM Dr Mahathir has recently despised the ‘Cash Is King’ malaise, hope he will also take a lead in eco-friendly-less-spendthrift approach in sensible land development… Read more »

It would not be so bad for the economy if a business (private sector) launches a delusional project using its own funds or loans. The problem is (a) the sneaky “public-private projects” – invented by you know who (b) the various “concessions to promote pioneers” (c) deregulation arising from dogma and direct corruption (d) fake, feel-good statistics from a minister who privatised his services for a higher pay. Up to early 2008 in USA (the heart of the capitalist echo chamber), online commentators would not even mention the word capitalism. Now they are calling for the return of guillotines. I… Read more »

Ah pek. So it is okay in the name of low cost housing can do anything to the environment? The solution is higher density. Density in pg is low. In hongland, it is 25k per hectare. or sq mile.

Very good write-out and it just hit the nail right on ! I believe many people especially Penangites are having very high hope in the administration. But all that are just not that easy and will continue as a pipe-dream. In the mean time, we have to keep waiting and wait long long lah…. !

D Master of Doom speaks yet again!!! I believe he will be happy only living in d Amazon by himself.

Is this to rival Forest City?

Dr Mahathir stressed that if Ting intended to bring the rich from China to live here in the high-end condominium units in Langkawi, it would be a “no”.

“That is his business. If he wants to do business, anybody can come. But it is a no-no if he intends to bring in the Chinese to live here.

“If he wants to revive his business, we will support him,” added Dr Mahathir.

Unless the govt have the intention of banning Non Malaysian from buying and investing in properties.Why put the blame solely on the Chinese from China? If foreign people are depositing legit money, this is investment isn’t it? Or maybe Mahathir want to review the M2H (Malaysia MySecond Home visa program?) Malaysia cannot survive in the long term if we keeps on importing those from Bangladesh,Aceh,Palestine and those Rohingyas(Burmese Benggali) While many of us do welcomes Mahathir to play a crucial role in reviving a half dead Malaysia, but some of his 1980-90s habits need to be discarded. Please do not… Read more »