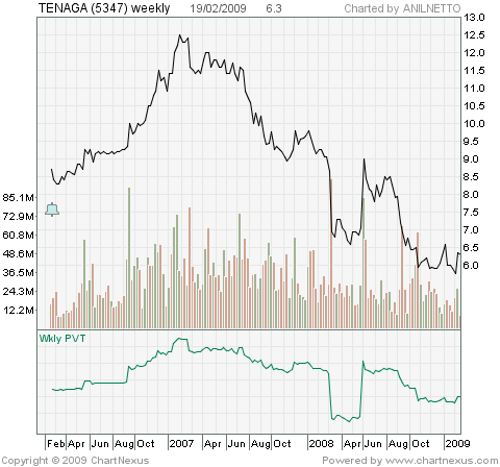 And now it wants to take over the jinxed and problem-plagued Bakun Dam from Sarawak Hidro. Good luck, Tenaga – you will need it.

Tenaga explains that its forex loss was due to its exposure to Yen and the US dollar, against which the ringgit has weakened. (Tenaga had taken out over RM10 billion in term loans – mainly 30-year and 5-year Japanese term loans hedged against currency option agreements and cross currency swaps to reduce exposure to forex losses.)

Observes one analyst, “Same thing happened to them back in 1997/98 when they got walloped because of all their yen-denominated loans. Looks like they haven’t learned one bit from that episode.”

That’s not all. It’s operating cost rose 49 per cent (despite higher revenue growth of 28 per cent). The funny thing is that coal prices began falling drastically from August. So Tenaga may have been caught with forward contracts during the quarter ended Nov 2008, which it may have entered into at the height of the commodities bubble. If that’s true, it says a lot about their analysis of market conditions as even back in June 2008, it was clear that the commodities boom was a bubble that could not be sustained.

And there’s worse to come:  Tenaga’s capacity payments to the private electricity companies (for electricity that Tenaga doesn’t need) are expected to rise further with the commissioning of 1,400MW from the Jimah power plant in 2009.

Mind you, demand for power in the country is actually dropping with the economic recession. But Tenaga has to pay more to the IPPs for electricity it doesn’t need. Amazing, isn’t it?

So why should it bother you if Tenaga makes losses? Well, the main shareholders of Tenaga are the Finance Ministry (Khazanah) – 38 per cent; EPF – 14 per cent; and Amanah Saham Bumiputera – 9 per cent.

Sime Darby was supposed to take over Bakun but then wisely backed out, leaving us (via the Finance Ministry/Khazanah/EPF’s stake in Tenaga and EPF loans for Bakun construction) holding the Bakun baby, which was the brainchild of Mahathir.

Shouldn’t the Tenaga CEO’s pay be linked to performance?  After all, these CEOs and political leaders often say that workers’ wages should be linked to productivity…

Where are all those people who cleverly justify the Bakun Dam project that it is economically viable and benefit the nation and the peolple? What happen to all those persuasive ‘statistics’?

This project looks more like a financial blackhole instead of just a ‘baby’.

a) First: CEO of the year. Wonder the panel of judges are bird of same feathers – oxymorons. b) Second: A monopoly, but yet continue to oblige paying other private power supplier at a premium. Although those extra power generated is og no use to TNB. c) Third: TNB in limbo – no issue the raayat will assist in the bail out. As long, all the other independant power supplier make enough profit to fed the cronies. d) Fourth: To take over Bakun is to take care of own BN cronies. f) Fifth: TNB being a monopoly, also can go… Read more »

at this point TNB cant blame anyone for the billions of lose but after buying bakun they will start blaming bakun a failure .
a typical norm in malaysian companys ..

These are the consequences of putting incapable person on TOP.
They get high pay, big bonus, screw up big time, and guess who pay for the losses!

Everything goes to the rakyat!

Privatization is not a bad thing.

But so far in Malaysia, Anil, or can anybody suggest which privatization project is actually bring better services, reduce cost and actually benefits the rakyat?

In the kingdom of the blind, the one-eyed jack is king! So, he gets the CEO of the Year award lah….

Tenaga is run by all the UMNO cronies who are either do not not what they are doing or just downright stupidity. How can you lose money running an organisation which has ZERO competitor.
It is indeed amazing after losing BILLIONS$$$$$, they now wanted to take over that jinxed Bakun project JUST to save another UMNO crony…. Pity the poor rakyat who have been skim off their hard earned money by these people. Malaysia real boleh la.

Wow, thanks for more good news, Anil. That’s what this country needs right now. We got the best of everything – political instability, financial mismanagement and economic downturn! Malaysia boleh!

WHAT DO YOU THINK……ceo OF THE YEAR….FOR LOSS COMPANY…….HA HA HA ……joke of the year

Tenaga and all its gullible shareholders are doing National Service to save UMNO’s best and loyalest crony in Sarawak, namely Abdul Taib Mahmud. Taib’s Cahaya Mata Sarawak and other family business interests are not doing well. So, he needs Bakun (and the Rio Tinto Aluminium Smelter) like a drowning person needs oxygen. And he needs this before he personally (but not his son or other relatives) bows out of Sarawak politics. In other words, Tenaga (and its gullible shareholders) are helping secure Taib’s huge family fortunes in the years to come. UMNO boleh..! Taib lagi boleh..! But Tenaga tak boleh..!… Read more »