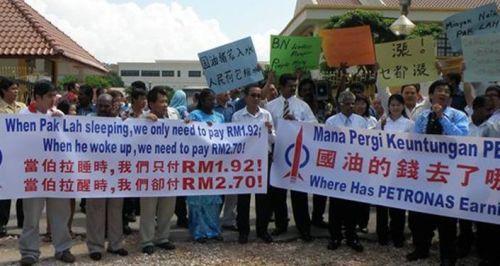 So Petronas and the Malaysian government says subsidies distort the market. Of course, the withdrawal of subsidies will encourage conservation of a scarce resource – which is a good thing. It might even reduce pollution and congestion. Roads were noticeablly less congested in parts of Penang and KL today. Traffic on the Penang Bridge heading to the island at 5.20pm – peak time – was smooth; the usual bottleneck after the toll plazas, as the mutiple lanes narrow down to two lanes, was gone.

But has the government given much thought to the impact of the removal of oil subsidies on the poor – and even large segments of the middle-class, who are rapidly moving down to the ranks of the poor in terms of real purchasing power?

One key question has not been answered: why a sudden complete removal and not a gradual phasing out? Come on, tell us how much profit Petronas made for the year ended 31 March 2008. The figures should be available by now, even if the annual report isn’t ready.

This is what the Petronas CEO was quoted today by AFP as saying as he called for an end to energy subsidies:

“While this is being pursued, nations must also work towards a gradual removal of generous energy subsidies, which cause unmitigated consumption and market distortions that are unmanageable in the long run,” he said.

Perhaps the Petronas CEO and the government will care to explain why Petronas has to sell natural gas to the IPPs at vastly subsidised prices? Some RM30 billion over the years…

The government must also tell us why Tenaga has to pay the IPPs for capacity charges for electricity it really does not need.

Also, why are we spending billions to lay the longest undersea cables in the world to transmit electricity from the Bakun Dam to the peninsula, when there is a 40 per cent reserve capacity in the peninsula?

Questions, questions… but no satisfactory answers. This is an article I wrote some time ago about the colossal subsidies given to the IPPs:

PENANG, Oct 12 (IPS) – A staggering 27.6 billion ringgit (8.2 billion US dollars); that’s the amount the Malaysian public has incurred through gas subsidies given out over the years to private power producers by national petroleum corporation Petronas.

With oil and gas prices now soaring, the government – and Petronas – is feeling the pinch of higher fuel and gas subsidies. Petronas has proposed a removal of gas subsidies for electricity production, but much of the attention has focused on the impact it would have on state power firm Tenaga Nasional Berhad.

Tenaga faces a double whammy: from higher gas prices and from higher fuel costs being passed on to it by the privately owned, and from hugely profitable, independent power producers (IPPs). The IPPs sell power to Tenaga under lucrative power purchase agreements (PPAs). Tenaga also generates its own electricity through its network of power plants. Read more

In the meantime, small businesses are likely to suffer as people tighten their belts. Restaurants, hawker centres, and sundry shops are likely to see a drop in business.

Perhaps it’s time to look at alternative economic models that return to the basics – a more sustainable model of development that emphasises food self-sufficiency, public transport, the promotion of small eco-friendly business activity, and the recycling and recovery of waste.

To keep the economy healthy in the face of all that belt-tightening, the government should invest in activities that enhance human dignity. It should focus on expanding the public health care system, enhancing the quality of education, building more affordable houses, encouraging organic farming and improving public transport. All these will create jobs – and more importantly, they are sustainable activities, built on domestic demand, that will improve the quality of life. We cannot rely on fickle foreign investors alone to drive and control our economy.

In the meantime, do you detect any slowing of business activity in your area? What do you think are the likely implications of the price hikes? How are you coping personally? Have you “changed your life-style” in any way – what sort of belt-tightening measures have you undertaken? How do you think this will affect you – and the economy?

anil,
you are still barking and some of us still happy hearing you barking at wrong tree.
Why?

teksi driver had to wait for ngv gas at least one hour to fill their tank-so the goverment have no interest to protect people in the street- because we are only their coolies before become boss in election.

raj raman-anyway keep barking anil-sure someone will hear your cries on behalf of Malaysian.

SO THE TRAFIC IN PENANG ALSO MISSING?I THOUGHT KUALA LUMPUR ONLY.

Don’t be surprised if the price of Kopi-O in the kopitiam also goes up!

The IPPs are having it so good I have decided to go out and buy some of their shares. Sure make money one.

Easy somebody has got a share in the pie.In malaysia you scatch my back n i will do your’s.

if we could expose these guys and their connected businesses, we could call for a boycott. but we’re too pampered for that. it’s always let someone else like mr anil do the fighting, as we sip kopi-o and rant about it in kopitiams. offering austere policies that the country should adopt as if we are the finance minister. the truly financially smart ones would have anticipated the government’s move and prepared for the rainy season. fuel prices will continue to rise as it becomes scarce and the middle eastern conflict will continue to deteriorate as weaponry becomes more sophisticated. unlike… Read more »

donplaypuks there are many ways to skin a cat. first, inflate the construction cost to extract the real cream upfront. second, set up a maintenance unit to divert yearly profits to camouflage the indecent profits generated by the power plant. there you go. return on inflated assets is just a paltry 9% in the words of the cronies. re-emphasise its return on assets (and not equity. as comparison, banks would laugh all the way if it can 1.5% on assets). and if you add in the diverted profits, no wonder the cronies can afford to own shopping complexes, huge commercial… Read more »

Bro,
I understand that Petronas has to susidies IPP’s. Then only IPP’s price to TNB be lower so that electricity charges is reduce to consumers.
But what I don’t understand and demand goverment to review PPA with IPP’s is why should TNB has to buy power from IPP’s eventhough there are 40% access capacity?????.

Should PPA be scrutinised and TNB only pay to IPP’s as and when its use the power???.

What about the sale of gas to the Japanese when gas was first discovered. MM was so afraid that nobody will buy it because they did not offer to anyone else and only offered to the sogososhas for a song only to be sung to MM. Rumors recently that to fulfill that contract even petronas has to buy back at a high cost to fulfill the extremely low price and unable to supply to local industries. So subsidies should not be given to homeland but alright to continue fulfilling low price agreements. BN past and present is walking one step… Read more »

Bro I’d be amazed if IPP’s only make 9% on returns. It is common knowledge that bankers insist on 18% Internal Rate of Return (IRR) for funding these IPPs. Most venture capitalists and personal bankers will guarantee you 8% return on investment. So, shareholders of IPPs should be screaming bloody murder if all their CEO’s with their million $ remuneration packages can provide is a pathetic 9%. In the early years of the IPPs it was reported that collectively they made more profits than Tenaga with giveaway ‘Take or Pay’ contracts and 20-year laugh-all-d-way-to-d-bank Concessions. The trouble with the subject… Read more »

‘When the first generation of IPPs came online, Tenaga’s profits plunged by 30 percent in 1995. “When the generous terms were given to the IPPs, all my other peers around the world asked what was happening,” former TNB executive chairman Ani Arope told the media last year. “They said (the contracts to IPPs) were ‘too darn generous’. (The terms) were grossly one sided.” When asked how the Malaysian model of IPPs was created, Ani who helmed Tenaga in the early 1990s, replied, “Ask our previous Prime Minister (Mahathir)!” WHO OWNS THE IPPs and how much (if any) “commision” goes to… Read more »

in trying to camouflage the excessive profits given to the IPPs which are controlled by Maahtir’s cronies, the GOvt announced a tax on super profits enjoyed by IPPs. Under the formula, a 30% tax will be imposed on returns in excess of 9% of assets. Lets clap our hands, right? But, you better wait coz cronies are cronies and they need their usual feeding. Now, the cronies are crying and said its an unfair tax. In compensation, the cronies want an extension of the IPP contract! Goodness, do you know how much these IPPs have been making. Billions of dollars… Read more »

Please tell me that you are suppoting Tuntutan Subsidi Makanan.