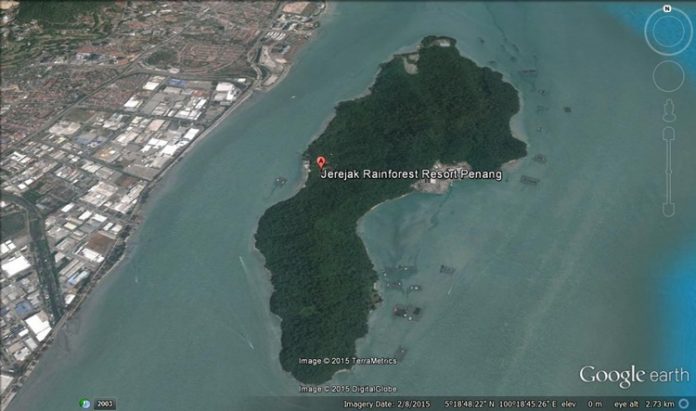 The Penang state government should not sell its 49 per cent stake in Tropical Island Resort on Pulau Jerejak to Uda Holdings Berhad as it will only add development pressure on this green satellite island.

The resort, located on the west coast of Pulau Jerejak, is presently a joint venture between PDC and the federal Uda. Pulau Jerejak lies off the southeast coast of Penang Island, between the first and second Penang bridges.

As it is, the resort is hardly profitable. If PDC sells its 49 per cent stake at a price based on the present land value, then Uda’s cost of investment in the resort will rocket. For Uda to then realise a reasonable return on its invesment (ROI), it might feel compelled to further develop the resort, which owns 80 acres or almost 10 per cent of the 895-acre Pulau Jerejak.

And it is already mulling such plans.

See this excerpt from a report in The Star:

Asked about UDA Holdings’ future plans for Pulau Jerejak if the acquisition goes through, Ahmad said the company would suggest turning it into another tourist destination, which at the same time would involve real estate activity.

“We want to have seaview villas and also refurbish the existing hotel on the island.

See the magic term “real estate activity”? Seaview villas? What do you think all that is about? Earlier, the state goverment had confirmed there was a proposal to build 1,000 condos, a bridge, and a theme park. (Oh no, not again!)

Unless people need a bridge to drive their cars across and park them at those expensive “seaview villas” to be built on Pulau Jerejak!

Uda has not had a brilliant record in Penang, not just in managing the Pulau Jerejak resort but also in Tanjung Tokong.

We can almost predict the game plan by learning the lessons of the past.

The joint venture was awarded 980 acres in land reclamation rights. The project began in 1992 but UEM flopped during the 1997-98 financial crisis.

E & O then bought a stake in Tanjung Pinang Development. For just over RM100m in shareholders advances and settlement of outstanding loans, E & O captured almost 980 acres of land reclamation rights for the Sri Tanjung Pinang project, which has a GDV of close to RM30bn (in total for both Phases 1 and 2). Amazing!

Today, E & O holds 78.8 per cent in Tanjung Pinang Development with PDC holding the remaining 21.2 per cent. The project includes the planned creation of an artificial 760-acre island under Phase 2, i.e. 85 per cent the size of Pulau Jerejak.

The people of Penang lost a huge source of potential revenue from land reclamation rights through this convoluted wheeling and dealing. In contrast, federal GLC Sime Darby, the largest shareholder in E & O, stands to reap hefty returns from the project.

Back to Pulau Jerejak in the present: PDC is in a joint venture with Uda. If PDC sells its 49 per cent stake in Tropical Island Resort to Uda so that the latter controls 100 per cent, what is to stop Uda from later selling the resort and its 80 acres of land to a well-connected developer?

PDC’s present stake in the resort may not be yielding a fat return; but please, not everything in life should be measured in terms of ringgit and sen. You don’t have to surrender everything, including the kitchen sink, to the developers, you know.

The state may argue that land is so expensive and that we can’t afford the land to create public parks. But here we have an entire green island – a ready-made natural park – on our door-step, and what do we do? Surrender a chunk of it to a federal entity – for what? More property development? This goes against the global trend these days of greater decentralisation – not more centralisation (which the state government is, rightly, always complaining about).

Pulau Jerejak should not be turned into yet another playground for the wealthy. It belongs to us all. It should be preserved as a green lung for the recreational and therapeutic benefit of the many who are feeling increasingly suffocated by the congestion and concrete jungle engulfing the island.

Hands off our Pulau Jerejak!

Singapore set up a biodiversity research facility at its Pulau Ubin.
http://www.channelnewsasia.com/mobile/singapore/new-biodiversity-research/1913778.html

Penang should learn from Singapore to set up meaningful facility at Pulau Jerejak.

Everywhere you go in the world, islands close to the city center are playgrounds of the rich. Sentosa, Rossevelt Island in NYC, Palm Beach Island, Florida, London City Island etc etc. Its unrealistic Pulau Jerejak remain undeveloped in the current anti-development rhetorics of NGOs.. The only realistic plan is to hold off on development in the short term, to fully take advantage of it in the long term for example like in the case of Sentosa but eventually it will inevitably happen. The crime here is not that its being developed, but rather that its full potential is in the… Read more »

Hi bigjoe, The other cities you mentioned have lovely large parks. Penang has too few parks to support its population.

Besides, an artificial island almost the size of Pulau Jerejak is emerging off Tanjung Tokong as a playground for the wealthy. How many such islands do we need?

Its bad idea to connect two problems different problems together..The lack of parks in George Town is highly unforgivable. But that does not mean the problem is solved by a park located too far. The most logical answer really is for reclamation BY THE GOVT for the people.. Not replace bad planning with not allowing planning at all which is the same thing as bad planning. Its not a matter of how many playground we need, its should be as many as they can afford and want because they also want parks and space. It that the rest of us… Read more »

Niao Kong allows frenzied development for the rich & famous so as to reap massive incomes for bulging state fund. But for what social use are we seeing the state fund being channel to? To fund more political ceramahs, buntings, streamers, banners comes GE? I heard from a gangster that Rm100 for hanging a (party) flag by the roadside is handsome income for the thugs in Penang. Go check out yourself If you think I am bluffing. I don’t trust the way of entrusting the rich to develop Penang to realise any public park, public amenities & what you fancies… Read more »

I have asked previously how many city dwelling Penangites bring their families to the existing Botanical Garden on weekends, instead of the air-conditioned shopping malls?

‘The state may argue that land is so expensive and that we can’t afford the land to create public parks’.

UDA is UMNO-linked. Sure got big projek to masuk poker.

So is Zenith the main contractor for the tunnel. Did we not heard that CAT senior has been calling for a unity govt with UMNO to save Malaysia. How many face does the CAT and senior face.

The ghosts of war casualties on Jerejak may not approve disturbances. Better engage Ghost Adventurers to seek the spirits blessings before any undertakings.

With the Malaysian tigers under threat, best to make island a natural habitat for the tigers before they are hunted to extinction. Tiger Park to overcome the greedy developers!

Perak has a new animation theme park soon to lure tourists.
I will not be surprised if developers are planning a theme park in Pulau Jerejak. Could the tiger park making a return?
Anyway, it will be better to make it a Eco-tourism site instead for Penangites to get near to nature.

The CAT lied to the people. As we look down, we see a beautiful serene island that could be one of the last bastion of our natural environment and our beautiful Penang. With the middle bank coming up, Pulau Jerejak will not be the same anymore just like Batu Feringghi, Tg Bungah & Botak hill. The CAT and party criticism on the 1 MDB which is not true and a lie is a deception to deflect fast track development that will destroy our island and the co-operation between them and UMNO cronies. Is not the main contractor for the tunnel,… Read more »