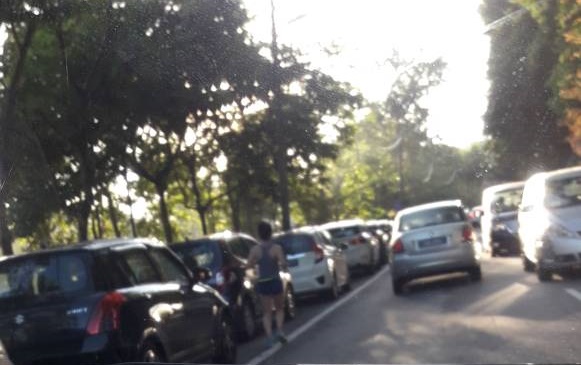 This is what the Penang Botanic Gardens area looked like this Sunday morning.

The crowds at the gardens and the nearby Youth Park – even on weekdays – highlight the critical shortage of open green recreational spaces elsewhere on Penang Island.

Now, imagine if one fine day you wake up to find a cable car station in or around the Botanic Gardens. Something like this perhaps? 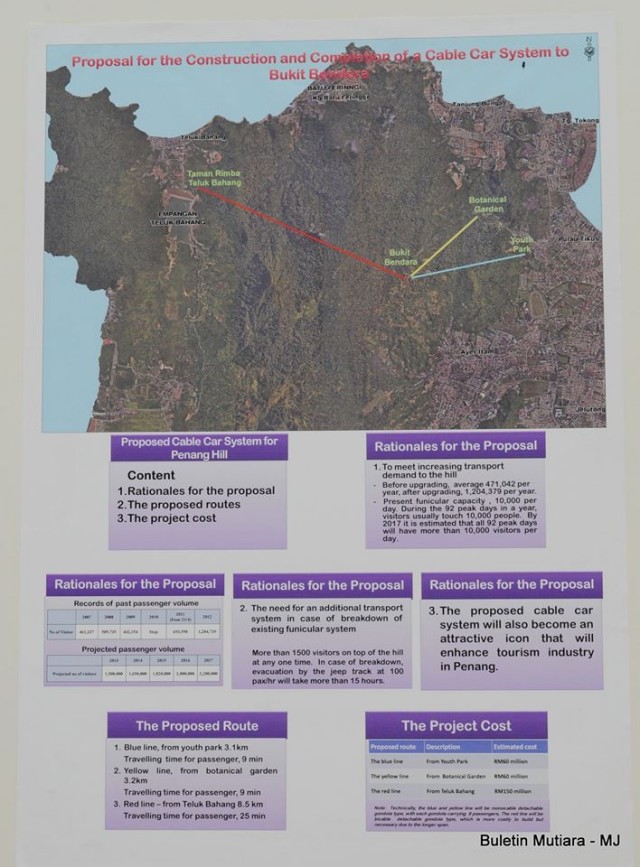 Can you imagine the crowds.. Not a good a idea.

Then, there is the added consideration that the Penang Hill summit is nearing – or may have exceeded – its maximum carrying capacity of 10,000 persons per day (as stated in the Penang Hill Local Plan) after the completion of the ridiculously fast funicular train in 2011.

In fact, a WWF Malaysia report in 2001 had recommended an even lower carrying capacity for Penang Hill:

The carrying capacity for Penang Hill was determined by taking into consideration the biodiversity conservation as well as the proposed tourist facilities, and infrastructure improvements that are detailed in the Action Plans, and is calculated to be about 4,000 visitors per day.

So any plan to add further modes/routes of transport eg cable cars to the hill-top should be flatly rejected.

Otherwise we will end up with a crowded over-developed summit which I don’t think environmentally conscious Penangites would want. Once we have big crowds on the summit, then the next step will be more property development pressure on the hill-top.

The BN-led Penang state government and Berjaya tried to do that in the late 1980s, but Penangites rallied around in a civil society-led campaign to Save Penang Hill, and that may have contributed to then Chief Minister Dr Lim Chong Eu being defeated in the 1990 general election.

So let’s be vigilant and nip in the bud any plan to add to the carrying capacity of Penang Hill.

Get close to nature high up, Anil have you experienced it good or not ?

Alternative for urban folks on island to witness rim forest without the hassle of getting into Belum or Taman Negara.

I shall go there after 6pm got discount for forced to save (barang naik) trip to Bukit Bendera.

Witness rainforest in the dark for urban folks?
You must be joking or misleading others!
Spin harder!
Get your facts right about exploring rainforest safely, but I can’t blame you for being an inexperienced novice trying hard to be an expert+spinner!

Tokong is a friend to the hill.

Or hill is friend to tokong?

Congested because everyone drove and indiscriminate parking.

Strategies to Reduce Air Pollution from Vehicle Emissions in Penang:

Why no talk on high car population on Penang Island?

Anil feels guilty talking about cars as himself hardly rides rapidP but turnaround own motor vehicle?

Pg Lang knows there and stated here, penang is critically short of space. Yet they still want to come in cars or when in 4wds. Why civil society dare not to tell central that local transportation should be managed by the state. Civil groups should tell rapid to provide more buses or improve the services with time table. civil groups should pressure phc to issue daily quotas for people going up the pg hill. Hundreds of thousands of visitors are at the Beijing palace daily as such they have to impose restriction. But with cable cars, they help to ease… Read more »

I sincerely hope Penang Forumers start to kick start such initiatives without any delay. “Bin Chui” ego cannot save the environment.

Why no complain on the high number of cars choking up the roads of Penang, and in this case Penang Botanic Garden?

If their nolstagia is right, the serenity of the past is due to low number of private vehicles. Today every household has at least 2 cars.

Many places to visit in Penang in 2018, but please leave your car at home and take public transportation or Grab/Uber:

Pg lang just kau beh kau bu. Look at the photo. What time is if. Of course to discredit, choose the worst congestion. 12 to 3pm? No too hot for car drivers coming in a baking oven. Photo shows light is at an angle. So it is morning or evening.
If funicular breaks down Ah pek will blame gomen for unable to come down. There is very limited contingency plan. With a cable car, visitors have a choice and safety net

Ooh, how about a Kancil carpark?

Don’t do complain, do complain. People need to keep their myvi and use public transport.

Do we really need

Sherine is asking whether we truly need to own private cars now they we can free up congestion with Grab, Uber, and RapidP?

Can shriek a lot of nonsense, but never taken Pg Rapid nor know the ticket price! I can say I have rode Penang Rapid more than you troll!
Want to see Penang Rapid tickets I have collected?
… use your brain to find the truth! And not spin (the untruth) to shiok sendiri!

Ah pek to blind to see and too deaf to hear. Cant he see what I have written. Of course ah pek collect tickets by picking up or at exit door to collect them. Ah pek said Rapid should lower its ticket but ah pek can only should and scream at komtar but not at pjaya. Shout more at pjaya and they will sent for ah pek to eat curry rice, sori no curry mee for months foc.

Ah pek never take. RAPID? Ah pek always get discount unless driver is tun lan with ah pek. Discount not enough? Go and yell at pjaya with your howling experience at komtar

Trying to save up for cheaper alternatives lifestyle yet propose / support Grab, Uber? Have you ever tried them to know real-life cost of travelling?
I assume you have not.

For buying underpriced bungalow, you are investigated (so fast).
Now, how about buying overpriced property?
Can investigate or cannot? Or still need a polis report?

Everyday, I passed along Jalan Air Itam & enjoyed the nice-to-see+dream-but-cannot-buy utopia view of greener properties advertised on 3 billboards side-by-side stretching prominently on the flyover opposite Masjid Negeri while waiting at traffic light junction.
Now, the 3 billboards have vanished prior to Bank Negara decision to hike OPR to 3.25%! Also, gone is the day-dreaming at this traffic light!

Can huant for cheap curry mee orso can hunt for cheap house. If not use pipes or containers as you have spotted in cnn

Frenzied uncontrolled development including unaffordable properties, no thanks to Niao Kong’s unquenchable egoistic-desire to cement-up once greener Penang has led to karmic effect on those speculators who played into NK’s game.
Karma has no sympathy. Ha, Ha.
Economist sees rate hike hitting property speculators hardest
https://malaysia.yahoo.com/news/economist-sees-rate-hike-hitting-property-speculators-hardest-134700930.html

Talking about living congestion, we have seen container homes as answer to unaffordable housing.
Now we have concrete water pipes as another solution to congested urban living:
Are these tube homes the answer to Hong Kong’s housing problem?
https://edition.cnn.com/style/article/opod-tube-home-hong-kong/index.html

If not talk non sense ask tokong laid humes pipes for you and you. test and stay for ond year

Quote:
The BN-led Penang state government and Berjaya tried to do that in the late 1980s, but Penangites rallied around in a civil society-led campaign to Save Penang Hill, and that may have contributed to then Chief Minister Dr Lim Chong Eu being defeated in the 1990 general election.

My Hunch: A repeating of mistake by Arrogant CAT or a bad omen for Niao Kong?

Ah pek no complain shen ang mos can cut trees and cut slopes to build pg hill for themsleves to enjoy the cool weather whereas ah pek ah kong slog under the hot sun below and bAr from going up. Now ah pek wanted to restrict fellow pg and tourists from going up akin to exlusive volvo club

BN will use the undersea tunnel issue, not Penang Hill issue, to arrest ‘key personnel’ to cripple CAT government, and wrestle back Penang in GE14?