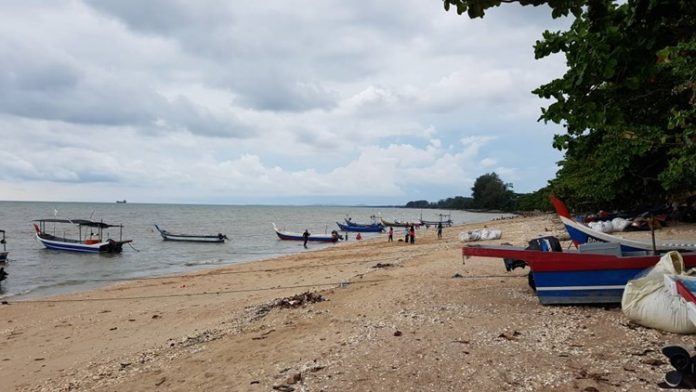 Fishermen in Bagan Ajam in northern Butterworth are experiencing tough times as their catch has dwindled in recent years.

As a result, Bagan Ajam Fishermen unit head Mazlan Abdul claims the fishemen’s incomes have dropped substantially. He says their usually catchment area across the channel has been affected by reclamation work.

By the time the fishermen divide the day’s takings among their boat-hands and deduct fuel cost there is little extra for them to take home – unlike in the past, when they used to earn a comfortable income.

“We used to be able to catch bawal tambak (Chinese silver pomfret) which would fetch us a good price and was much in demand by Chinese restaurants.” But such fish is no longer easy to come by, he says.

What about the high fish prices at the local market?

Mazlan and his colleague lament that middlemen make more out of this arrangement. For instance, ikan temenung (Indian mackerel) in the market sells for RM18/kg, but the fishermen only receive a fraction of the price from the middlemen.

At present, a fishermen’s market/bazaar held nearby enables the fishermen to get a better price for their fish. But it is held only once a month.

The lower income for the fishermen means they are forced to look for other sources of income to supplement their earnings and cope with the higher cost of living – but such alternative sources are not easy to find.

Frustrated by the situation, some of the fishermen from Bagan Ajam were among the hundreds who participated in a recent 150-boat flotilla protest against land reclamation off the coast of Tanjung Tokong.

To make matters worse, our waters is the most overfished in the world, so they are threatened by what we throw into the sea and into our mouths. Time to eat more sustainable proteins.

The Department of Environment (DoE) has issued an immediate stop-work order for the RM1.2 billion Aman Laut mixed-development project in Kuala Kedah over environmental concerns. According to director-general Dr Ahmad Kamarulnajib Che Ibrahim, whose department issued the order on May 15, the project had yet to obtain approval from the DoE. The Aman Laut project looks to transform the current fishing town by building high-end bungalows, condominiums, malls and luxury eateries. According to its website, it will comprise an entirely new township on the coast of Kuala Kedah and allow residents to enjoy resort-like living while transforming the state’s property… Read more »

SINGAPORE — When Apollo Aquaculture Group chief executive officer Eric Ng realised his fish farm lease in Lim Chu Kang would expire in 2019, the 44-year-old started looking for an overseas alternative. “Land is very limited here, and the cost of setting up a farm in Singapore is very high… But Brunei has vast land and abundance of sea water,” he said. Now, he owns a plot of land in Brunei that can produce up to 5,000 tonnes of trouts, groupers, snappers and sea bass when it is eventually operating at full capacity within the next five years. In comparison,… Read more »

The sea and oceans are filled with toxic waste .
High time to look for some other type of work.
With highly subsidized fuel and outboard motor (boat engine)and can’t survive?
No need to blame reclamation projects or the middleman and retailers.

Small mesh size net used all these years give no chance for young fishes to survive and propagate causing dwindling fish population around the waters of Malaysia???

Go to wet markets and you will see small-sized fish, not fully grown, are being sold. Thus no chance for fish to spawn to replenish fish stock.

Bagan Ajam fishermen can approach Gelakan for micro credit financing scheme to reinvent themselves as modern fish farmers. They must learn to to upgrade themselves cannot forever go to sea to earn living as age catching up no stamina to labour on boat. With Gelakan as mentor, they can grow ornamental fishes for overseas export. Meanwhile, they can take pride in drinking Bagan Ajam very own (since 1950) “Cap Keretapi” 2-in-1 kopi o kau kau. Each packet consists of 28 sachets of 28g of kopi o for only RM8.88, sure huat huat one. http://www.traincoffee.com.my Foes become friends drinking train brand… Read more »

In Penang, aquaculture – the fish farming industry – is envisaged to have the greatest potential for cultivating fish or seafood products for domestic and external consumption.

Anything mass produced in shortest time like aquaculture should be treated with caution like a double-edged sword.
Short of using hormone injections (like in chicken farms), chemical-based fish feeds can easily escape filtration & ‘pollute’ the sea water & may lead to intoxication of local nature’s biological system.
We have already seen what hormone-injected chicken meat can cause some men’s breast to ‘develop’.

Why not lead protest against farm chicken and boycott as they are injected or often go to hunt chicken in belum valley which is injection free??

[Fast food franchise] chickens are slaughtered 21 days after hatching. Growth hormones and antibiotics are injected to the chicks to accelerate maturity to [taste] good?

Driven by our insatiable demand for seafood, Malaysia’s fishery resources have been over-exploited and almost 90% of Malaysia’s demersal (bottom-dwelling) fish stock has declined in some fishing areas, due to unsustainable fishing practices, pushing fishery resources to the verge of collapse and damaging the environment in the process. Therefore it is important for Malaysians to start thinking about our seafood consumption patterns and how each of us can play a role to conserve our marine resources for future generations. A survey commissioned by WWF-Malaysia showed that more than 70% of Malaysians would stop or reduce seafood consumption if fish stocks… Read more »

Simple as this: as long as we continue CAT (or Niao Kong) Arrogant Style to deteriorate the Penang sea environment via dumping of dredged sand (from Penang Port) & frenzied reclamation, we will see less & less fish catch in the coming months. No need to ask fishermen why they are catching less & then to rebuke them for not going deep sea fishing when in-the-first-place-problem is not created by them but by greed of a state gomen + developers in tango in the name of PTMP. Damien, may you introduce one generous investor to finance trawler boats for these… Read more »

OWhy state again? You pay tax to jib or niao kong?
Anyway. Pg has encouraged fish farming just like caged chooks with caged eggs. Go and tell jib to give more $£¢€ to fishermen when can give $£¢€ to expand airport in sarawak

RM80 million issued to Sandakan airport expansion out of blue not from budget.
Niaokong tried hard to expand Bayan Lepas airport but no money. Very suffocating with many in airport now.
With more conventions held at Spice, more air travellers coming in, so how to accommodate the increase?

Damien, Election Time coming! Naik Jeep desperate to give Sabah something to shiok while the promise is nothing but saliva talk to buy votes & buy time. We will see it happens post-election-time in the same vein as all subsidies cancelled in the name of austerity drive of Nak Cheat. Then, it will be Sabah’s turn to “Nyiamak Naik Jeep”. As for Pg Airport, can forget Fed funding. Think out of the box. Form a Penang Investor Fund. Get the Richie & millionaires of Penang to invest but don’t promise like these scam money-games. Medical tourism players like private hospitals… Read more »

As simple as it is indeed Tanglung! A fisherman is much wiser than any government member. They know what happens if you go against nature. Same as farmers…they know as well Stealing parts of ocean is stealing nothing else. Re- clamation comes from claim agsin!!! How can you claim something which is not yours…So claim again is a very strange word! Ocean is Ocean, land is land. Fishfarms are intoxicating…yes! Not only the poor fish.but also the ‘ignorant’ people who even feed their own children with intoxinated food. Not only fish but 45 days injected with pesticides and antibiotic chicken,… Read more »

So the Jap fishermen are correct. Ozziz should not make noise when Jap fishermen harpoon at the whale. The cantonese and shantou people should continue to eat shark fins. Why deep silence over pommies which reclaim pengkalan weld. Beach road is the original shore line of Pg island. Likewise, many ponds and lakes have been backfilled and go and tell gomen to stop turning land into lakes by building dams. Why no protest when gomen buiLD dams in Pg and five dams in mudah? Without these dams we think we can be keyboard worrior?

If giving money to sibu due to election why not the same here? Pg airport extension. Make your job here easy to dethrone niao kong and usher new era of gilakan in pg.

These fishermen should approach Jabatan Perikanan to help set up commercial caged farming. Otherwise, they just need to venture out further to deeper sea for monstrous catch.
Stop blaming others.

Orso water is getting more polluted. We drink too much kopi o kau kau and char kueh teow. Oily water goes to the sea. What about too much traffic. Tyres wear after rsin orso goes to the sea

Overfishing does not allow fish stock to replenish. But easy to put blame on reclamation.