An update on what is happening to the RM1.1bn which PDC is supposed to receive from the sale of 103 acres of Bayan Mutiara super prime land to Ivory Properties.

A second three-month extension for the payment of the first instalment was approved by PDC on 3 February to allow more time for Ivory to fulfil “conditions precedent”. As you can see, Ivory is requesting a reduction of the interest due to PDC.

The following was announced to Bursa by OSK Investment Bank Bhd.

Amongst the terms of the PDA and the supplemental letter dated 11 November 2011, Ivory is subject to the following:-

(i) obtaining the approval of its shareholders within three (3) months from the date of the PDA; and

As at the date of this announcement, Ivory has yet to dispatch its circular to shareholders as it has received the approval from Bursa Securities on 3 February 2012. Further, the payment to PDC is still pending as the approval from Ivory’s shareholders is one of the condition precedents for the drawdown of its financing facilities.

On behalf of the Board, OSK wishes to announce that Ivory had, on 3 February 2012, received the approval for extension of time until 10 May 2012 from PDC for the following:-

(i) to obtain its shareholder’s approval for the Proposed PDA; and

(ii) to pay the Balance Instalment.

The above extension of time is subject to interest. Any interest not accrued will be refunded to Ivory free of interest within fourteen (14) days after PDC’s receipt of the respective payments. Ivory is appealing to PDC to reduce the said interest.

This announcement is dated 8 February 2012.

This is the second extension after the state agreed to an initial extension in November 2011 with interest at 8 per cent p.a. 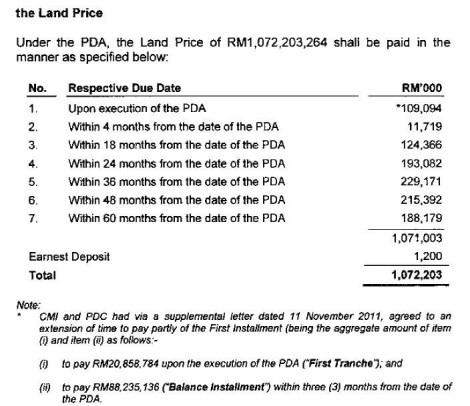 And these are the conditions for the initial extension: 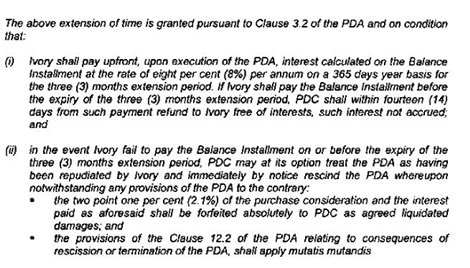 It is clear that the state has not yet collected the first instalment of RM109m. So where did the state get the RM500m from, when it presented the mock cheque for the housing development board? A pre-general election stunt?

Ivory won the contract with PDC and then entered into a joint venture with Dijaya Corporation. Vincent Tan’s brother Danny has a 31 per cent stake in Dijaya, according to the firm’s 2010 Annual Report.

PDC should never have sold this land lock, stock and barrel to a private developer. Instead, it could have sold a small part of it and used the funds raised to provide social amenities, a large public park and affordable housing. You cannot put a price on such things.

If Ivory Properties financial status is questionable, how can we be sure of the quality of their construction work? The Peak and Latitude condominiums in Mt Erskine area that are currently being built by Ivory Properties are supposed be over 30 stories high and the developers are cutting the hills to build these condos. We certainly don’t want a repeat of the Highland Towers tragedy, and what makes it worse is there are so many houses that are very close to the construction site.

go ell it to UMNO.

>10,000 abandoned houses and yet give the same party 60 year toll concession without any tender.

if one cant build homes, you think can build roads. DUMBO.

Prime-Prime waterfront land isn’t going to be allocated for Low or even Medium cost housing…that’s economic reality, nothing to do with whether BN or Pakatan is in charge.

The state government still has to meet its social obligation to make affordable housing available to the lower income group, either directly through govt funding or in conjunction with private developers…

The anticipation of rich foreign buyers leading to frenzy development of expensive homes at the cost of social-class redistribution is AOK? Put it this way: Global Cosmopolitan & UNESCO Heritage Site status > anticipated foreign property investment > frenzy development of rich man’s homes > transmigration of the poor & middle-class to Phai Seh Mainland Is the authority planning this frenzies anticipates this type of CHANGE for any better? Or they plan it to happen? How many foreign home buyers actually invest here to stay and to create businesses? How many to speculate? How many to just leave them empty?… Read more »

tunglang, mind your words !
what Phai Seh Mainland.?
You yourself creating 2 distinct classes btwn penangites living in mainland & island.
what make u think u have higher “status” living in island ?
bcoz you belittle mainlanders now you feel pai seh got to move out of island ? Karma falls on you !

Dear kittykat46, You are right that prime waterfront land is never allocated for low cost housing anywhere in the world. But how about average class housing? Why does everything have to cost above a million. What about houses priced at about 250 or 300k? Not all Penangites are extremely poor and want to reside in low cost housing, many are professionals but who are in their 30s or 40s. They earn maybe 5k or so. How are they supposed to afford million dollar homes. Are they not worthy of living close to rich multi-millionaires? Sure, development is always a business… Read more »

So in return wealthy Sporeans, Hong Kongers, Mainland Chinese, Indians, Aussies, Europeans come and invest in Penang island. The ? is what is the percentage ?

Ivory bosses surely have that figure otherwise they won’t commit in billion deal knowing their cash reserves quite constraint being not a regional buider powerhose and just being listed last year.

ivory has no money

Ivory will justify its million ringgit homes after the fact (of profit margin).
So nobody can Kau Peh Kau Boh its ‘Lion’ share.
Rainy green-horned wildebeest speculators, happy home buying!

That sets bad precedence for bad business practice already prevalent here! A credit crunch in businesses in the making.
Lu Kiam Wa, Wa Kiam Ee, Ee Kiam Lu.
What a big circle of debts.
Why must this Donald Ducky Trumpeter preaches gau-gau leading us to the downward spiral steps of financial meltdown?
All it takes is one bad habit of doing business to spread virally and eventually pull all down the Pit of angst and woes.

waiting to be sued mr josephine for unsubstantiated allegations?

you a mr using a female name as cover. shame on you.

Whats the big deal. If Ivory cannot pay, PDC or the govt can take back the land and give it to others. This is part and parcel of any business deal. The mistake is PDC should not have chosen Ivory in the first place as their cash flow are actually not that good. In business deal interest rates are usually subject to negotiation.

But when it comes to interest/penalties on late-payment imposed on ordinary taxpayers or quit rent payers (non-corporate), is there any negotiation?

Is it better than Hua Hee Tai (Astro)?
Anyway it will be a free hungry & greedy developer Lion show for all to wait and see.
Next wave of wildebeest speculation on the way and O’Blady bank crocodiles with croc’ tears @ the shore of Bayan Mutiara.
Not sure, ask the rainy green-horned property gurus.

During the great migration at the Serengeti, the predators are waiting for the prey (migrating herd):

Similarly in the Penang property eco-system, the developers (predators) is waiting for the home buyers (preys) at the property launch.

Make sure you are like the Wildebeest that survives the crocodile attack when crossing the river, or the fastest gazelle that outrun the cheetah, or the buffalo with thick hide that the lion could not kill with its bite.