The International Monetary Fund’s World Economic Outlook report for 2009 is just out here.

Not only that, the IMF warns that all the risks are on the downside, i.e., hugely dependent on what happens to the US. In addition, Malaysia is also dependent on Europe, Japan and China.

My own forecast for Malaysia is grimmer than the IMF’s projection.  Just a casual look at the sharp drops in our exports and manufacturing sales is enough for me to say GDP could be minus 5 per cent this year.

For 2010, the IMF projects that the Malaysian economy will grow by 1.3 per cent. Again this looks somewhat optimistic. The global financial crisis is nowhere near satisfactorily resolved; it could take years.

What’s more, there is now a huge disconnect between recent global stock market bear rallies and the depressed real economy especially in the United States. This has led some to believe that speculators are once more in action – in the stock markets this time.

Don’t think so? Despite the Bursa Malaysia stock market rally in recent weeks, just look at the Malaysian Statistics Department’s monthly manufacturing statistics released on 16 April. It shows sales value plunging by 28 per cent in Jan-Feb 2009 compared to the same period a year ago. In the same period, the number of employees fell by 68,000 (6.5 per cent) while salaries and wages dropped by 9.9 per cent. 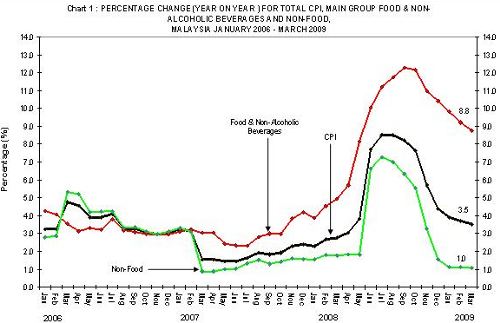 Meanwhile, although the CPI has moderated downwards, the food price index is still up almost 9 per cent in March 2009 compared to a year earlier. This is based on the basket of goods used to calculate the food CPI.

People in their everyday shopping generally appear to be facing even stickier prices that have refused to go down by much ever since the price spikes last May as a result of the badly thought-out oil price hike back then.

If the Malaysian economy contracts by 3.5%, then what will be the contraction of Penang’s economy. I bet it will be more that 3.5% (assuming the same benchmark). No good. Not good at all.

I dare say that there is some light at the end of the tunnel. Many of my networks in the manufacturing sector have mentioned that orders have started trickling in, compared to Q1, 2009, when it was a total ZERO. The retrenchment exercise you are seeing are in many cases purely a “HOUSE CLEANING” exercise. Food prices have NOT come down, and I believe that once it goes down Producers/Manufacturers and Hypermarts will have a tough time to push it up again. The GOOD NEWS is that Tesco, Giant and Carrefour are giving very good discounts and promo offers, every… Read more »

-3.5% is just the average number. Exports and businesses indirectly dependent on the export industry are going to shrink a lot more than that.
There’s a long, dark, night ahead.

Anil Psudo INTELLECTUAL blogger Rocky is asking where is Pete? …ppl r happy PETE is a man telling the truth why he did not appear to the court hall…..does this rocky questions.. how come both frogs got chest pain the same day when it comes to face corruption charges?….even in my dreams i feel like puking when i do remember this name ROCKY

When an economy is export oriented and it depends too much on other countries to buy but not that essential during hard times and are very competitive in nature, it will affect the country when there are no takers for these products. A self-contained economy is still the best, never mind if we don’t progress that fast. Back to agriculture is the solution. Promote tourism and consumption of local products. Look within our potentials. Mahathir was wrong when he emphasised too much on ‘export’ economy, despite condemning the US and other developed countries. They just have to sneeze and we… Read more »

Malaysian economy shrinking by 3.5% is a very optimistic figure. To my opinion it will shrink by more than 3.5% due to Foreign investors shying away from Malaysia in droves due to all the corruptions and strong arms tactic use bu BN over the Judiciary and all other administrative bodies under its control.

Oh by the way, I assume the MACC action to not charge Fairuz is to make PKR looks bad.

Well it seems to be right as our economy is largely dependent on US and other large trading blocs. So if we are their manufacturing base, they will have the value addition and hence it is correct that our economy will contract more than theirs. But to qualify this, I assume that a large volume of the economy is dependent on external trade.

But then again I not an economist.

What Kempen Turun Harga? The manufacturers reduced the volume of the products to make the goods cheaper. Keep your eyes open when shopping. You’re not saving any money at all.