Rock blasting at the Bolton Surin project site in Tanjung Bunga is unnerving residents in nearby Chee Seng Gardens. 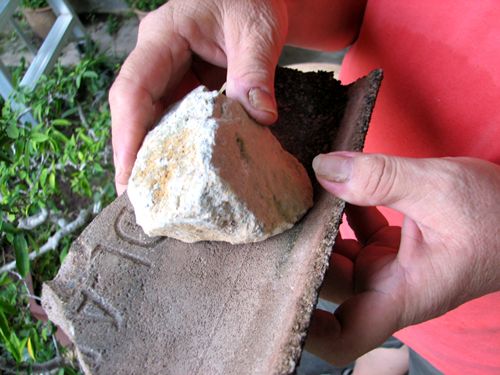 This has prompted Tanjung Bunga Residents Association president George Aeria to once again write to leaders of the Penang state government and Penang Municipal Council:

Today (19 May 2010) again, Bolton Surin carried out their usual blasting and this time a large rock flew further than my house i.e. a full 500 feet, (my house is @ 400 feet from the blast site) hit the roof of my neighbour and broke it….

My Brother (David) has since lodge a Police Report (as attached), accompanying by a CD which has: –
a. 3 video clips of the blasting dated 12th, 17th and 19th May 2010. I have several more earlier dated clips of similar blasting
b. 5 photographs of the broken roof tiles and the piece of rock that flew the distance to hit the roof

My affected neighbour (my house is nearer to the hill) will be lodging a Police Report tomorrow morning as she is old and is awaiting the return of her son to assist.

These flying rocks are not something new. It has been happening for months but it has been quite serious in the last few weeks. I attach a copy of the Police Report as lodged by my brother and that he submitting to the police at the Tg Tokong Police station.

In each video clip as provided to the Police (copies will come to your office very shortly) especially the one dated 17 and 19 May, you will hear many stones and rocks (and a large one in the 19 May clip – i.e. the rock that hit the neighbour’s roof) hitting the road & roofs. This happens practically everyday at 3.30pm when they blast and we are at our wits end suffering the rock pieces falling everywhere. In fact the contractor’s workers run all along the road to pick up rock pieces that fall on the road after every blast.

As the TBRA Chairman and a resident directly affected by the current blasting, I appeal, beg, cajoul, insist and demand that you take Bolton Surin to book and do your utmost to bring them under control. Sadly MPPP nor the Police nor the Geotech department are monitoring and controlling the Developer, Bolton Surin to undertake the blasting in a proper, controlled and safe manner. Do we REALLY Have to wait until someone dies BEFORE our State Government and Federal Government (i.e. Police and Geotech Dept in Kedah) Departments act. PLEASE HELP. YOU ARE IN A POSITION TO HELP AND I AM APPEALING.

We sent a similar video of a huge flying rock in Feb 2010 but as usual the Police (after some drama by coming to the site in a large convoy – just like MPPP in Sep 2008) replied that we were mistaken. How outrageous a statement.

So I appeal to you and your state government to put out a permanent STOP WORK order so that your Government may review the measures that MUST be taken by the Developer on a daily basis to arrest the dangerous manner in which the blasting is being carried out. PLEASE just issue the stop work order to force the developer into RESPONSIBLE ACTIONS. (They are now doing totally exposed blasting on the vertical hill slope.) We are not asking much, JUST asking you to help us residents be safe and out of HARM’S WAY which they, the Irresponsible Developers, are PUTTING ON US in their greed to finish fast and with no regard to the safety of residents

I await your reply on the matter.

The state assembly member for Tanjung Bunga, Teh Yee Cheu, has also written in to same state leaders, echoing the residents’ concerns:

Very stringent measures must be imposed on these hill slope developers to make sure the finished goods are safe to the public and precautionary procedures must be taken.

One of the best strategies at this moment is to apply “stop work order” to those developers who do not take care of public interests.

We, the residents of Taman Aun Say/Taman Lembah Tupai of Taiping, Perak are also encountering the same problem right now. We have highligted the problem to the Municipal council in Taiping, but the blasting is still continued. We are worried of the safty of the residents. Is there any way to know if these blastings follow the specs religiously, and how do we know that these blastings are safe for the residents to continue living later… Can you help to highlight us how to go about getting the right channel to solve this problem if munical council remains slience for… Read more »

Have you tried contacting your state assembly member or MP to take up the issue? Or make a press statement.

This case has been high lighted last year, settled down, and resurface now, again. I would like to believe no matter who is in the government, enforcing team (little Napoleon) has to do the work without bias. As all are well aware that it has been 50 over years, BN ruled the country and the local government officers are “well fed”, even though complaints have been made by residents or any parties, when come to enforcing, its rather easy to “settle” the case without any action(s) taken according to the Rules and Regulations. Unless a revolution / total reform (real… Read more »

LGE, can you please be there when rock blasting is in progress? See for yourself.
This developer is arrogantly indifferent to complaints and safety of nearby residents.
Stern action should be taken against them otherwise it will be deaf ears no matter how many houses be rock-missiled like target-practise!
Rakyat have rights to safety of lives and properties. Development comes second.

The SOP in Malaysia is that at least half a dozen people have to die before the authorities take any action. Until that happens, all complaints fall on deaf ears.

The rocket state also like that meh ??? I thought they are different based on opposition cheerleaders’ reactions. Oh, in fact they are 2 x 5.

The predicament of the residents is real. The authorities must ensure that the rock-blasting is carried out “in a proper, controlled and safe manner.” Punitive actions should be taken by the relevant authorities, including a ‘stop order’, if the developer does rock-blasting without sufficient safety precautions!

Don’t wait for loss of life and properties before clamping down hard on the errant and irresponsible developers! Do it now!