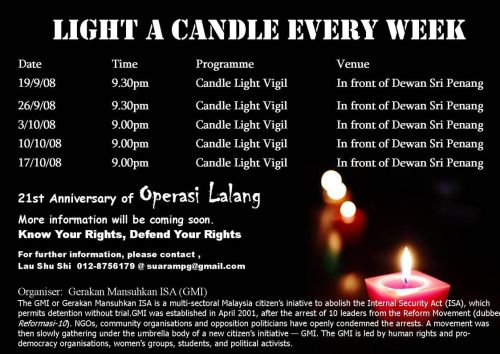 I was just looking for a photo of ISA detainee Teresa Kok to put on my blog when Aliran president Rama phoned with the good news that she was freed at around 1.00pm. That kinda spooked me – but it’s wonderful news.

This is how Kit Siang described her release in his blog:

At 12.56pm, at lunch in Ipoh, my mobile phone rang. I saw the caller was “Teresa” and wondered who was using her phone.

But it was her on the line and wondered how she wangled the use of her phone while in detention.

But no, she did no such improper thing. She told me that she was being released.

Bravo. The irresistible pressures against her unjust and undemocratic detention had succeeded.

And this is Teresa’s reaction upon her release:

I have been released after being detained in solitary confinement in a 6-by-8 holding cell for seven days under the Internal Security Act (ISA). I was informed by the police that they detained me under section 73(1) of Internal Security Act 1960, which means I have incited racial and religious tension and conflict.

After being detained for seven days under the guise of so-called investigations, the police failed to produce any evidence or proof of me being involved in the activities of causing racial and religious tension. Full statement

Alhamdulillah. And we must continue to pray for RPK, the Hindraf Five and all the other victims of ISA.

I believe a special effort needs to be made to acknowledge the Malay leaders of Pas, PKR and various Muslim and Malay NGOs (not to forget Zaid) who stepped forward to lend their support, thus foiling the plot to turn her arrest into a racial issue.

Yet another candlelight vigil was held, this time down south, reports blog reader Johnny 99:

Dear Anil, there was a candlelight vigil as the CIC Church Jalan Gereja Johor Bahru last night where not less than 250 persons attended despite the apparent lack of publicity. Let there be more vigils and may the authorities see the light.

The Lord is great! Praise be the Lord!

This is the happiest news I’ve heard this week. Thank you, God, thank you for Teresa’s release.

Even blog reader Seth, who had ranted earlier, is happy 🙂

(Meanwhile, Teresa’s accuser Khir Toyo is back blogging again today after an absence of 10 days.)

Even Mahathir has condemned the ISA arrests! (Say what? I never thought I would live to see the day.)

But there should be no let up. We must get Raja Petra, the Hindraf Five and all the others out as well.

Towards this end, the Abolish ISA Movement (GMI) will be holding weekly candlelight vigils in Penang beginning tonight at 9.30pm.

I hear there’s also a candlelight vigil in KL tonight for blogger Sheih Kickdefella, who was arrested for sedition.

Meanwhile, the Cathedral of the Holy Spirit in Penang is opening a candle-light prayer corner from tomorrow evening onwards. This corner will be dedicated to praying for the release of all the remaining ISA detainees (see the full list here), for the abolition of this obnoxious law, and for real justice and peace to reign in our country.

Thanks Simon. I totally agree and am with you on this one.
Cheers.

Ayah, Penang71, sorry lah.
Cannot fall for the tricks of MCA, Gerakan and MIC. They were gloating over Operasi Lalang but if not for March 8….
100% in the same boat as UMNO, not 99%.

thank you! its really appreciated.

Welcome back, Teresa. God is great and His love endures forever

The people of malaysia must keep up the momentum to secure the release of all isa detainees.It is inhuman to imprison anyone without giving him due process.
As Penang71 said, we must thank our muslim brothers who spoke out bravely against the isa detentions. If not for them, umno-bn (might) have turned it into a racial-religious issue and used it for ther political survival.

Just met up with Marina, Haris & Zorro and told them about the persistent vigil in Penang. Kudos to you for your posting and awareness on this.

Please keep the faith and lets us continue to pile the pressure. RPKs place is with his beloved wife and kids, apart from us, anak2 bangsa Malaysia.

While we rejoice with all those being released
Let us remember to pray on for those still detained
Freedom for all innocent ones is what all sane people relish
Afterall good, transparent governance and accountability are what we all want to retain

By the specific questions put to Teresa by her ISA interrogators, the police have confirmed that the premises of their action were Utusan’s and Khir Toyo’s bare accusations against Teresa.

In a non-Police State, the accusers would be the first to be investigated, interrogated and, if unable to substantiate their accusations, detained and charged. Somebody is digging UMNO’s grave with not an UMNO finger lifted in alarm or protest! UMNO has really gone bonkers. I can’t believe it.

No wonder Che Det is jumping up and down the sidelines.

Simon Li, don’tlah scold me like that!
I’m just so happy – that usually makes me magnanimous.
Like I said, it was HARD to do.
If I offended you, I AM SORRY. Friends?

Ong Ka Ting ”appealed” to his masters to expunge the STIGMA of ISA detention from Teresa’s record. Only a person thoroughly sick … can utter that a victim’s reputation is blemished …
…

Teresa is rightly pursuing Khir Toyo, Zaini Hassan and Utusan to bring them to justice. This warrants as strong a support as we gave her in demanding her ISA release.

Suing them is not about restoring her reputation because her reputation is a shining affront to all extremists and never needed restoration. Even more, it is NOT about revenge.

… THE PATH OF JUSTICE MUST NEVER BE PERVERTED BY THE HYPOCRICY OF “CONCILIATION”.

Alhamdulillah. And we must continue to pray for RPK, the Hindraf Five and all the other victims of ISA.

Glory to GOD on high.
YB Theresa GOD have heard our prayers.

Pls remember to thank the Islamic NGO’s also for they have also supported Teresa. This is truly the multi-racial new Nation at work.

Teresa’s free. Never thought that would have been possible. Thank you Anil, Haris,Zorro, Mahaguru,Lucia,Din….. and all you heroes of our blogosphere. Thanks to the civil rights activists and religious leaders of Malaysia. I believe a special effort needs to be made to acknowledge the Malay leaders of PAS ,PKR and various Muslim and Malay NGOs (not to forget Zaid) who stepped forward to lend their support, thus foiling the plot to turn her arrest into a racial issue. (here i should also thank MCA, Gerakan and gulp!MIC – THIS IS SO HARD). AND most of all, THE MALAYSIAN PUBLIC –… Read more »

Just managed to get access to the net as I was traveling. Anyway, thanks be to the LORD for granting us the wishes and prayers from all.

He works wonders if we keep the faith and now to pile the pressure for Pete’s release.

On this positive note, may be we can pray for another miracle. That our PM is actually a ‘GENIUS in disguise’ Remember what he (PM) made Malaysians believed what his promises were in 2004? Now, he has his chance to make them materialise, albeit via a different PM. Who might that PM be who can and will help him make his promises come true? He knows his own party will not let him fulfill his promises before. What difference will another PM from his party make then? The answer is obvious. He should go down well by letting the one… Read more »

I was just listening to the song “On the Radio” by Regina Spektor and the song reminded me of Teresa, and now she is freed. Thank God. Part of the lyrics …. This is how it works You’re young until you’re not You love until you don’t You try until you can’t You laugh until you cry You cry until you laugh And everyone must breathe Until their dying breath No, this is how it works You peer inside yourself You take the things you like And try to love the things you took And then you take that love… Read more »

she is going to sue them and its the rigth way to go.

whatever, ISA must be abolished for the greater good of the nation.

Praise the Lord.
Many more being ISAed. I think we will continue to struggle for those less famous ones.

Btw, seemed that Khir Toyo has change/deleted his accusation. That sure shows how ‘berani kerana benar” part of him. Thow the stone and hide the hand. Is he now going to accuse media of wrongly quoting him and letting the Utusan chap to take the rap?

“Even Mahathir has condemned the ISA arrests! (Say what? I never thought I would live to see the day.)”

What he belived that ISA is wrongful act????? Then whey he used it tremendously when he was in power. The OPS Lalang????

Either Tun is a ‘pelupa’ or ‘cakap tak serupa bikini.’ I think is the later.