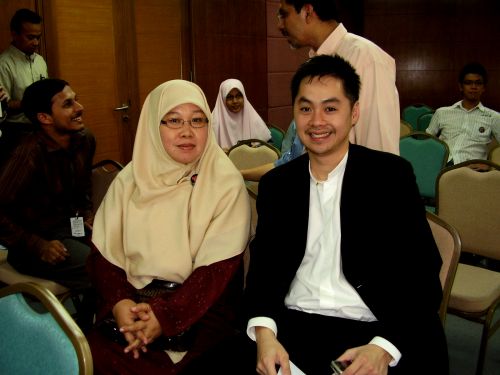 Blogger Norlaila Othman, whose husband has been detained for more than six years, and their lawyer Edmund Bon (Picture courtesy of Merah Hitam blog)

I urge all readers of this blog – brother and sister Muslims, Christians, Hindus, Buddhists, Sikhs and others – to continuing praying for the immediate release of all ISA detainees.

When we think of ISA detainees, we think of what Raja Petra, Teresa Kok and the Hindraf Five must be going through now. But there are about 60 other detainees; that’s a whole lot of human suffering, including that of their families.

The full list of ISA detainees can be found here.

The ISA is against Islam for it violates the principles of truth and justice as mentioned in the Holy Book of Al-Qur’an in Chapters An-Nisa’, As-Syura, and An-Nahl, verses 58, 15 and 90 respectively. To arrest and detain a person only and only on the basis of suspicion and without trial, without opportunity to defend oneself is forbidden and considered haram in Islam. Even if the Government wishes to detain a person for preventive purposes, the matter must be decided in an open court. Detention without trial – without the opportunity to defend oneself in an open court – violates the rights and denies the guarantee that Islam provides to all individuals. The guarantee is that everyone has a right to freedom and well-being.

And here’s a verse sent in by Jane Abraham:

If you are Christian, you might like to meditate on this passage from Luke Chapter 4, which is more or less the “mission statement” of Jesus’ ministry:

16 He came to Nazara, where he had been brought up, and went into the synagogue on the Sabbath day as he usually did. He stood up to read,
17 and they handed him the scroll of the prophet Isaiah. Unrolling the scroll he found the place where it is written:
18 The spirit of the Lord is on me, for he has anointed me to bring the good news to the afflicted. He has sent me to proclaim liberty to captives, sight to the blind, to let the oppressed go free,
19 to proclaim a year of favour from the Lord.

And here is a Buddhist prayer sent in by blog reader Sabrina:

A Prayer for Freedom From Suffering

May all beings everywhere plagued
with sufferings of body and mind
quickly be freed from their illnesses.
May those frightened cease to be afraid,
and may those bound be free.
May the powerless find power,
and may people think of befriending
one another.
May those who find themselves in trackless,
fearful wilderness — the children, the aged, the unprotected –
be guarded by beneficent celestials,
and may they swiftly attain Buddhahood.

Blog reader Thinesh Rajasingam sends us what he says is one of the most famous and simplest Hindu prayers:

Blogger Justin Choo sends us some words of wisdom from his Buddhist teacher:

Equanimity (upekkha) is the quality of being emotionally calm, balanced and even, especially when confronted with difficult situations. Sometimes it is also called equipoise (susamahita) or being centered (majjhatta). Equanimity is the last of the four Brahma Viharas, one of the different ways love can express itself. It can be difficult, impossible even, to feel warm friendly regard to someone who has hurt us or who is unapologetically evil. The way we can express love to such a person is by remaining calm, unmoved and free from hatred. From this stance it will be much easier to open up to that person when we have developed our love more strongly. Equanimity is also a skilful way to respond to the many temptations, provocations and sensual impressions that assail us every day. It will allow us to keep our sense of balance and, as the Buddha said, to ‘walk evenly over the uneven’ (S.I,4).

Anyone care to contribute a prayer from Hinduism and Sikhism?

Read Norlaila Othman’s touching blog “Merah Hitam” for an idea of what the families are going through, some of them for years and years. Her husband’s plight has prompted this remarkable woman to play a leading role in the Abolish ISA Movement (GMI), which has the support of over 80 civil society groups and political parties.

The Malaysian police lost what little credibility they had by arresting tan teresa and rpk….

Luckily, we now have Pakatan Rakyat to fight for us against police atrocities. And we havent even raised the issue of kickdefella who was arrested under the sedition act WITHOUT an arrest warrant.That is clearly against the law. Why dont our judges have some backbone and teach the police that THEY ARE NOT ABOVE THE LAW? Why dont the … magistrates protect innocent malaysians against arbitrary charges and intimidatory remand? Wake up judges and earn your relevance.ANWAR, save malaysia from the real criminals.

All this because the … outgoing PM decided he needed the high priest of Islam Hadhari to lead the nation. Despite claiming to be a religious leader, ‘an ulamak’ as claimed by KJ, Badawi hasn’t an ounce of feelings for those rotting under the ISA nor for their families. He is the biggest hypocrite around now.

And for the botak, he is no leader and is lost in his importance as a cabinet ranking …. to Bapak Hadhari and KJ.

see: http://malaysianminorities.blogspot.com/2008/09 I am ranting & raving… screw grammar, screw everything… I just don’t understand you flers la…10000 Malaysian Indians …. the FRU for a whole day coz they could not accept temple demolition. that despite nationwide scare tactic and police roadblocks. Then 800,000 Indians boycotted the Thaipusam. Then they completely trashed the only party that represented them for 50 years. now MIC got nyawa nyawa ikan only. 5 of their leaders are in arbitrary incarceration since Dec last year. The Chinese like to say many things about Indians but one thing for sure they got b**** lah… But the… Read more »

But praying alone will not work with this stupido still leading the Govt. Call your local BN MP/Assemblyman and complain about the ISA arrests. Say it will be difficult for your to continue supporting BN if the three – RPK, Teresa and Sheih – are not released soon. Get your friends to do the same.

If the BN rep is from UMNO, ask him to join PAS or PKR or even DAP. That will put enough pressure for Mr Lord Dato (Gen) Abdullah to wake up and hopefully let them out.

One of the most famous and simple Hindu prayers:

My heart breaks for all the ISA detainees and their families. I know it is wrong to wish ill on people but I can’t help praying everyday that some sort of illness befalls the evil people who have locked up the detainees. My prayer for the detainees is that Allah/God continues to give them strength to endure the challanges that they are going through. What we need is a miracle so that they can be released immediately.

I remember seeing a show over RTM1 around the time of the permatang pauh election about the ISA and kamunting. They interviewed one ISA inmate which was linked to JI and has been in there for many years. I couldn’t believe my ears when that guys said that the ISA is good and people like him should be incarcerated under the ISA because he was doing very bad things. Gosh! Doesn’t he want a fair trial? Even if he understands why he is being incarcerated, doesn’t he want to know for how long he has to be punished? Does he… Read more »

Whatever people do, he or she must be given the opportunity to defend oneself. ISA is definitely against Islam and I fail to understand why the goment comprise majority of Muslim ministers clinging to it. If power is in their head, just remember there is much more powerful in GOD than you. Why behave like a tyrant, why deprive peopleS’ freedom, why do you have to destroy families, kids of their happiness. This is an abuse of power. If you think he or she is acting against the interest of the nation, by all mean put him on trial as… Read more »

Anil, May I contribute a relevent passage from my Buddhist teacher: Equanimity (upekkha) is the quality of being emotionally calm, balanced and even, especially when confronted with difficult situations. Sometimes it is also called equipoise (susamahita) or being centered (majjhatta). Equanimity is the last of the four Brahma Viharas, one of the different ways love can express itself. It can be difficult, impossible even, to feel warm friendly regard to someone who has hurt us or who is unapologetically evil. The way we can express love to such a person is by remaining calm, unmoved and free from hatred. From… Read more »

~A Prayer for Freedom From Suffering~

May all beings everywhere plagued
with sufferings of body and mind
quickly be freed from their illnesses.
May those frightened cease to be afraid,
and may those bound be free.
May the powerless find power,
and may people think of befriending
one another.
May those who find themselves in trackless,
fearful wilderness — the children, the aged, the unprotected —
be guarded by beneficent celestials,
and may they swiftly attain Buddhahood.

Yes, there are about 60 (I think the number is close to 70+) detainees under ISA. There are a few detainees in there who were detain for forging identity cards, forging M’sian curreny, forging passports and corruption. These are all criminal offences so why didnt the police charge them in a criminal court? Why keep them incommunicado for two years or more? (An in-law told me about his former colleague in the Immigartion Dept. who was detained for accepting bribes. That’s how I know someone in Kamunting is in there for corruption. Relatives from my kampung gossiped about a well… Read more »

We will always uphold our prayers for all the ISA detainees. May GOD bless all of them.

We condemn the ISA that is unappropriately used. ABOLISH ISA!

All the ISA detainees have my prayers. No one should go through this without a proper trial. Everyone has rights. Abolish ISA. Citizens are not criminals