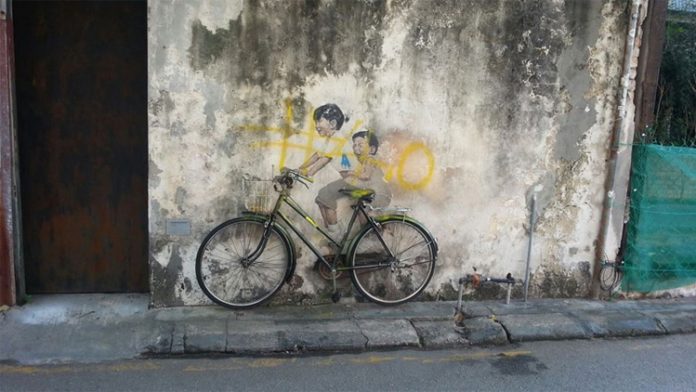 A couple of popular murals in George Town have been found to be vandalised with #4.0 spray painted in yellow. To me, this appears to be aimed at sparking a public outcry against the Bersih 4 movement.

The photos were pasted on the Facebook page of Penang State Assembly member for Komtar Teh Lai Heng. 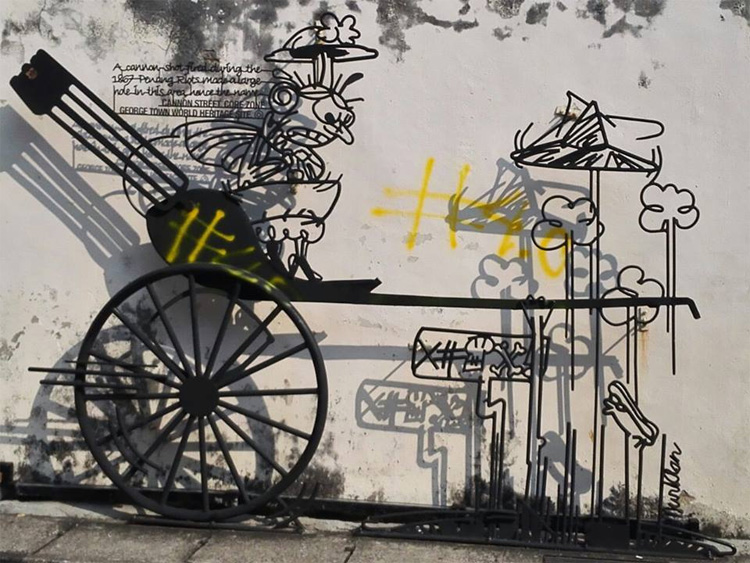 In addition, the same #4.0 was spray painted in large letters on the boot of a metallic blue-grey Proton Saga and on the shutter of what looks like a shop.

A resident of George Town heritage zone who saw the defaced murals refused to believe the vandals had anything to do with Bersih 4. “The cause is too serious to stoop so low. (The culprits) are desperate.”

It doesn’t serve any purpose for Bersih supporters to do this, said the resident. “If you want to encourage more support, you don’t destroy the thing (the people) enjoy. Warped thinking for sure did this.”

This is not the first time popular attractions have been vandalised. In 2011, the walls of the Cheong Fatt Tze mansion and Convent Light Street were defaced with racial political statements.

mindy, I restrict feedback in my blog to Facebook users who are using real identity.

Thailand reshuffles cabinet to focus on troubled economy http://www.freemalaysiatoday.com/category/world/2015/08/21/thailand-reshuffles-cabinet-to-focus-on-troubled-economy/ Thailand has reshuffled so has Indonesia and many others countries in the world. The world economy is shrinking not just Malaysia. Argentina nearly could not service its debts and its currency has gone down so bad that it is thinking of pegging its currency. Indonesia currency has dropped more than 50% so is Russia. Kazastan has lost 25% so are many of Latin American and Eastern Europe and many in Asia. Most of the world`s economy not just Malaysia but Asia, Europe, Latin America and Africa are all affected.. Investors still… Read more »

Jibby’s CIMB brother said the fair value of Ringgit based on economic fundamentals is RM3.70 per USD. In other words, we are paying 41 sen more for every 1 USD due to the loss in confidence in the present regime?

5% GDP enough? China will say what a pea brain, dunggu and syaitan. China is getting 7% and yet there is a fear of economic woes ahead. China has to adjust its currency.

Different topic, ringgit is still falling, THANK YOU TO NAJIB!!!! 1. The one million or so Malaysians working in Singapore salute and thank you it is now 2.96 going to 3!!!! 2. The half a million or so Malaysians working in UK, Australia, NZ, China, etc also thank you 3. The housing agents extend their gratitude as sales is brisk from Malaysians living overseas investing in properties in Penang 4. The doctors in private hospitals in Penang thank you for the huge increase in overseas patients. A group of doctors in GMC are buying Lexus for their wife’s, while another… Read more »

Like David Arumugam of Alleycats used to say:
TRIMAAAA….KASIIIIIH!

Johor folks crossing the causeway to work daily in Singapore are thankful to Najib that they get instant salary increment each time they swap their Singapore Dollar earned for Rinngit at the money changers.

Hidup Bn tetapi pengsan Rakyat. We have to work doubly hard. Doctors can buy new cars but ordinary people have to sell off their cars. The rich are getting richer but the poor becoming poorer. Hidup Bn for making sinkapore richer sending Malaysian talents to help them to prosper. We import diseases and no upgrade to our technology. Soon we are like pinoys with every household has someone working overseas.

We should not blame race or political affiliations. It is just plain hooliganism. The teaching starts in school. There are already too many hatred and jealousy in Malaysian society, cars get vandalized, walls get scribbled on, etc. it is a 3rd world mentality that exists.

MCA and MIC leaders always kowtow to UMNO boss. I do not expect they can say no when Najib says Batu caves and JB ancient temple are not qualified for world heritage sites.

UMNO politicians and public servants cannot afford to see non-Muslim worship places in Malaysia are given world heritage site title before any mosque is the main reason Batu Caves is rejected outright by the National Heritage Department(?)

Gerakan Mah has failed to get the Teluk Intan leaning tower a heritage status in Malaysia, let alone a Unesco status, despite making the promise in the by election? So would you believe that Gerakan Teng if he make the same promise on Penang’s Kek Lok Si Temple in his bid to get the Chinese votes? nkkhoo has once voiced his strong support for the JB ancient temple, which Pak Lah gave local heritage recognition in his last bid to get the Chinese votes. But the old temple is in dipilated condition and I wonder why the millions of Rinngit… Read more »

You must have been senile all along. Penang Heritage Status was obtained through the arduous preparation by BN Gerakan State govt that made the application and which was later approved together with Malacca by the world UNESCO after 308. Its the effort of the Gerakan govt not DAP. Please don`t … use it for your face saving.

nkkhoo
very difficult to put comment on your blog.
why you make it so diificult?
Is it required by MCMC?
Actually your articles provoke me to respond, but it is so complicated.

In my opinion, Anson lean tower totally got no change of getting listed in world heritage list. Ma was talking cock in the by-election.

Of course many tropical jungles in Malaysia like Penang National Park are qualified for world natural heritage listing.

NKkhoo Good to see your roaring instead of like a domesticated mammal for quite a while as evident in your blog more focus on health rather than the pressing social issues of great concern to the public. Some say you have been clamped down after Bersih2 outburst, and hence you abandon feedback in writings from your followers in your getting tamer and tamer blog. Anyway, your sexual health articles are good but at this juncture social justice should be of higher priority to the people. May be you can establish cordial link with anilnetto.com and who knows Yang Super can… Read more »

nkkhoo
very difficult to put comment on your blog.
why you make it so diificult?
Is it required by MCMC?
Actually your articles provoke me to respond, but it is so complicated.

nkkhoo has been promoting the sexual health revolution in Malaysia, as evident that the panda can conceive and give birth in Bolehland, possibly eating tongkat ali instead of bamboo? Mindy should respond to nkkhoo at his blog and not expecting Anilnetto to be a postman. Overnight nkkhoo leverage on Anil’s blog to gain more publicity to his blog? Yang should explain to Teluk Intan folks why there is no university there promised by Gerakan Mah. Teluk Intan folks voted for BN in the hope that their children would not have to go outstation for tertiary education. But they got a… Read more »

My proposals to preserve and protect the murals from the weather and vandalism.

> Cover the painting with a non-reflective, anti-UV coating and tempered glass. This will prolong mural shelf-life.

> Install surveillance cameras in the locations of iconic murals. (no help under BN-friendly police and AG office?)

> Reprint the murals on the ceramic with Japanese printing technology which can last for 100 years of no discoloration.

This sister-brother on bicycle mural has gained worldwide recognition of Penang, and some usual suspects just want to stir troubles by vandalizing it.

So many souvenirs with Or without trademark based on this mural have provided incomes to many on the island.

Anil and tunglang can pose there with your iconic hats before this much beloved mural being taken away?

Can we pretend that Cat senior is not calling to court and collude with the devil that start with M and Umm………..o

Financial Times: Najib Razak has too much power for Malaysia’s good. Once a model of development, the country’s reputation is sinking and so is that of the PM.

Will CAT gomen enact a law (or multiple laws) to protect Penang Heritage Assets? It’s high time to do so as many a time these suspected paid vandalisms happened & some may not be caught. A very high fine is a must to deter such offensive crime of political cowards & defacement of public assets: Rm20K or 3 yr jail term Public shaming on mass media Restrictive access (barred from entering) to George Town Heritage Zone Community service – sweeping public roads or cleaning walls under supervision by MBPP For repeat offences, the culprits will be exiled from Penang state… Read more »

It’s very bad for one to jump to conclusions. When one do so then he is no better than that person or people he is accusing of.

These gatai-gatai minions have no qualms to kotor-kotor Penang tourist attractions due to their political corrupted minds. Suggest Penang state government to instal more cameras to catch these culprits.

Yes, more cameras to catch the uncivilised and the uncultured samseng samseng, most despicable, really kurang ajar, we all know who, only idiots dont and try to pretend…

Friend, police and AG not bother to charge UMNO political thugs who were caught in the press camera. Do you believe installing more CCTVs will help to stop vandalism on these murals?

The usual suspects “lah” , who else?
The types who usually gate crash , slings racial slurs and make threats.
It is bad enough that there are people bombing the Erawan shrine in Bangkok city which is a major star attraction.
The shrine is neutral and so were the Penang’s murals.
Malaysia seems to have a fair share of sadist.

This means more Malaysians will turns up for Bersih4

From Komtar to Murals, the usual suspects of this despicable act are easy to identify.

Have you been drinking Ooo Thong Kopi?
Thong means Bucket.