Kee Thuan Chye and Lim Teik Leong as the overbearing bosses of FONY Corp in the movie ‘Sell Out!’

‘Sell Out!’ is a movie you might want to check out before it runs its course in local cinemas. It’s a satire about corporate greed and the choices many of us have to make – whether to live out our dreams and ideals or to succumb to the stifling dictates of the corporate value system. It is a movie rich in metaphor with some funny digs at Malaysian life thrown in. 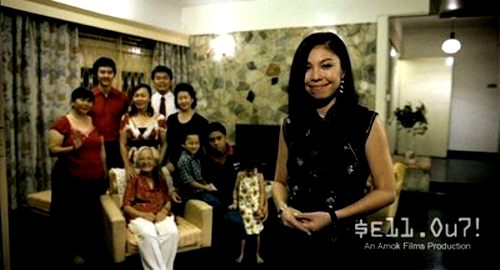 “Sell out!” character Rafflesia Pong, a reality TV show host, comes up with a brainwave

This is Yeo Joon Han’s first feature film and it is part musical (you are even expected to sing along to its karaoke-style subtitles at one point), part art-film, and part parody of the evils of capitalism and the pretensions of art. A self-absorbed Malaysian TV host, Rafflesia Pong, whose art-discussion programme is dying from lousy ratings, stumbles upon a golden opportunity when her latest interviewee, an ex-boyfriend, dies in front of the camera. It is perfect timing as she has to find a way to come up with the ultimate reality show, so as to outdo her American-accented, pan-Asian rival. Eric Tan is a mild-mannered, half-English corporate slave who labours to create the perfect Soyamaker Machine. But he is constantly assailed by unreasonable insults from his megalomaniacal CEO bosses (played with comic gusto by the hilariously poker-faced Kee Thuan Chye and Lim Teik Leong) because of his creativity and originality. One day, the dreamer in Eric steps out of the latter’s physical body and the original Eric has to make a decision whether to assassinate this dreamer-part of himself or not. All of these unforgettably quirky characters operate in a place that is unmistakably Malaysia (or, shall we say, ‘Truly Asia’), its capitalistic aspects exaggerated to ridiculous proportions. Bangkok Post has described the irreverent, subversive, surrealistic and sharply satirical movie, which also features three main local languages – English, Malay and Cantonese – as “a spiky satire of the new Malaysia”.

Yeo Joon Han was a lawyer-turned-copywriter who gave up his well-paying job in 1999 to become a fulltime filmmaker. The 37-year-old Yeo who hails from Seremban made his first ever short film in 2001 on 35mm format before the advent of the Malaysian indie film scene, the project was eventually completed to become Adults Only, a film that was shortlisted for the 63rd Venice Film Festival, making him the first ever first-time Malaysian director to compete in the festival, even receiving a Special Mention. Sell Out! won the Young Cinema Award for Alternative Vision at the same prestigious festival in 2008.

Thank for posting this info,I do enjoy this movie and your website. Keep on your good job!

Mr Lim Teik Leong!
He’s a senior by some years at Sultan Abdul Hamid College, Alor Star. He was to become one of my English language lecturers.

Mr Lim (Yes, even after DECADES, your teachers and lecturers are ALWAYS “Mister”) is also involved with ELS Language Centres http://www.els.edu.my.

He also handles some things with Just English Sdn Bhd. Besides training teachers, it also produces the “Just English” magazine and “Just English Explorer” for students from 11-18. www,justenglish.com

This is some way-off the thread 13 May link for you from a friend so, 8) cheers: http://news.yahoo.com/comics/garfield

WE SAY YEAH! AND NO TO ISA! 😛 AND HARIS FOR AG & RPK FOR IGP! GO FOR DSAI FOR PM & LKS FOR DPM & KIND WAN AZIZAH FOR HOME MINISTER.

There was reference of making “Datuk Heliliah, Datuk Ramli and Datuk Maroop” as judges — on 8th February 2002, Datuk Heliliah Mohd Yusuf, former Solicitor-General, Datuk Ramly Ali, a former Chief Registrar and Datuk Ahmad Maarop, a former Commissioner of Law Revision, received their letters of appointment as High Court judges from the Yang di Pertuan Agong. Their appointments were from Feb. 1, 2002.

I know this comment doesnt fit in here. However I really need to get some answers from readers of this blog. why on earth is NTR passing the buck to the sultan. It really sound foolish by him saying that dissolution of the State assembly is up to the Sultan. How can the Sultan dissolve the state assembly when he had advised the Sultan not to!!!!… On the calling by certain MCA and Gerakan leaders to dissolve the state assembly is also due to personal interest….I think. Their own intelligent units should by now have gathered enough info from the… Read more »

Check out ‘the geylang massacre’ singaporean movie. this is the real thing.

FONY was pop star George Michael’s dig at SONY during his long running legal battle in the early 90s. The sign appeared on a pair of headphones he was wearing in his Fastlove video.

George has a way with words. For the community service he was given for his toilet escapade, he responded in his song Outside that he had always been servicing the community…just that he had never really said it before.

Idealists and dreamers are a dime a dozen. But unrestrained corporate greed has sucked the global financial system into the current abyss.The goal is to find the acceptable middle ground. Profits with an eye firmly on the moral and environmental factors.

Here’s something relevant from “a neighbouring country”.

I was surprised to find this on your blog. It was a nice respite nonetheless.

The movie would delight especially those of us who can’t usually avoid the trash churned out by Hollywood these days. It is what a real movie is.

Hi Anil. your blog is pretty interesting. Cover so many subjects….from frog to dog to politics to so many other things.

You know what…one moment when our KLSE rise…the BN goons say our economy is improving withs lots of good statistics thrown in (mostly made up I guess)….but when it goes down, immediately BN will point their fingers at Dow Jones. Stupid BN