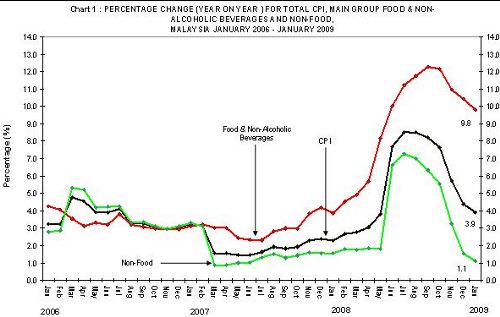 Inflation may have dropped to 3.9 per cent in January 2009 in line with the fall in consumer demand and the end of the commodity price bubble. But even though the agriculture commodity bubble has burst, food prices remain high with the consumer price index showing a 9.8 per cent rise in January for food. (The food and non-alcoholic beverages component contributes over 80 per cent of the 3.9 per cent rise in the CPI index.) Imagine, the index for rice, bread and other cereals has shot up by 18 per cent.

Isn’t it time we take another look at our agriculture and fisheries policies to ensure sufficiency, sustainability and food security while eliminating profiteering among middlemen and large corporate retailers? It is not the small-scale farmers and fisherfolk who are reaping huge profits.

Not many malaysians understand how government derives the rate of inflation and i believe Sharil himself doesn’t know how the rate is calculated.When inflation has dropped but prices of good remain high,chances are our incompetent government is using the wrong basket of foods to calculate rate of inflation. Economists understand that moderate inflation is good for economy and deflation is bad.So in short inflation is not a good measure of economic situation of a country.It’s consumer price index and purchasing power that matter.Weak RM is a major cause of inflation and weak currency is due to poor financial management of… Read more »

The secong economic stimulus packages should centre onto the provision of benefits that can be immediately realised by the ordinary man in the street. The production of food crops and supporting industrys related to food processing for domestic consumption would benefit the nation in terms of foreign exchange savings and the eventual establishment of a sustainable production of the agricultural products. The staple food, rice is still imported in large quantities inspite of the past substantial allocations in terms of financial input, irrigation infrastructure, enlarge acreage. The current business of rice importation and distribution in the hand of BERNAS are… Read more »

talk about large retail corporation, you should take a look at the procurement policies adopted by them. When the Gahmen requested them to lower their price and they gladly did so, i bet most would not know who is actually funding those discounts…is it the large retailer or is it their supplier? hmmm….

Food inflation according to the CPI was 9.8% in Jan but due to the high base effect of the second half of 2008, food inflation index will be moderating later this year. But your point is correct. Consumers are still paying high prices for food thanks to the mistaken fuel price hike of July 2008 which triggered panic price hikes by retailers. Btw. Anilnetto, can u tell me how you pasted the chart in your blog? Is it throug html or through excel? I am trying to do the same for my blog. It’s a .jpg file that you would… Read more »

The middleman towkays are the main culprits who enriched themselves while the farmers & fishmen are earning pittance. Meanwhile, the consumers are suffering.
The BN politicians are businessman friendly including these middleman, wholesalers & their cronies.
We also have to pay high prices to their crony privatised companies for the toll charges, Electricity, ERL & water.
Whether there is or will be any decrease of inflation, our cost of living will remain high.

Can we really trust our government statistic? Be Real!

Our good for nothing Sharil running around hypermarkets and mamak stalls begging for 10 sen reduction for the price of roti canai,sugar etc just to show how concerned the govt is about price increase.
With the annc of the toll hike yesterday, we sure know how concerned they actually are.
Looks like he has to start his running and begging again
soon. Show time.