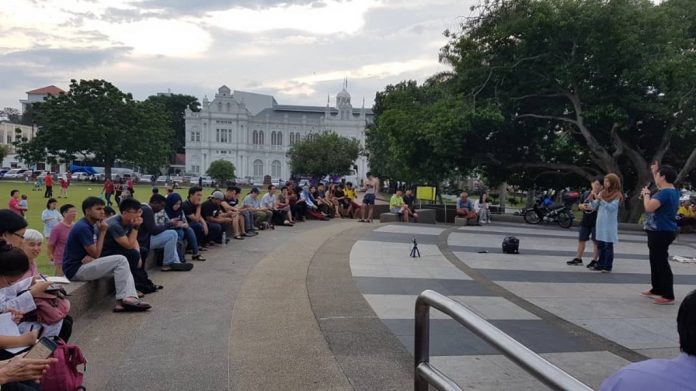 So this was where I was. While much of George Town was in the midst of world heritage celebrations, I decided to check out a group of youth at Speakers’ Square who decided to mark the day by launching a campaign for a better masterplan for public transport in Penang.

Many young people spoke up at the gathering, which lasted over at hour. They expressed concerned over the massive 4,500-acre land reclamation, which would be about 20 times larger than the Sri Tanjung Pinang reclamation under phase 1 – larger than Forest City in Johor.

Others pointed out that a single LRT line from Komtar to the airport under phase 1 of the SRS plan was not going to improve public transport elsewhere in the state. Mainland Penang especially would have to wait much longer to see major improvements in sustainable mobility. Some said significant immediate improvements could be made to the existing bus service, cycling infrastructure and pedestrian walkways. 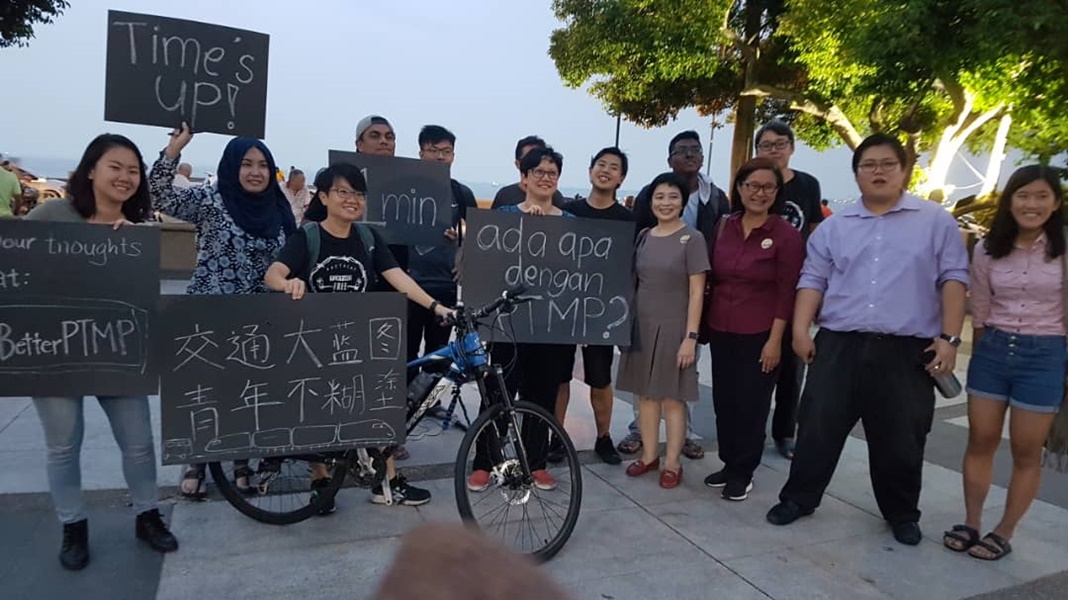 More weekly discussions at Speakers’ Square have been scheduled. The idea is to build on this to engage with the youth on the transport proposals as they are the ones who will have to live with its impact – for better or for worse – and bear any financial and operational losses that the state might be saddled with.

Meanwhile, another young person, Roger Teoh, a PhD postgraduate student at the Centre for Transport Studies, Imperial College London, has written another piece listing out the unanswered questions since 2016:

Given that the car modal share for Penang currently stands at 96.8%, how can the state government hope to achieve its 40% public transport modal share target by 2030 if they continue to focus heavily on roads and private vehicles?

What is the logic behind the argument of the “PTMP improving city liveability by promoting the use of personal vehicles” when recent health studies clearly show that an increased exposure to vehicle-emitted nitrogen oxides (NOx) and soot particles greatly increase the risk of cardiopulmonary diseases and premature mortality?

Why did the state choose the SRS-recommended LRT and monorail as the preferred public transport systems, as opposed to trams and BRTs as recommended in the state’s officially adopted Halcrow Plan, without doing any comparative financial cost-benefit analysis of the different systems?

Given that the BCR is the most fundamental metric used in feasibility studies to compare different projects, it would be very alarming if the Penang state government failed to provide us with a comparison of the BCR values between the present form and alternative PTMP (proposed by Penang Forum).

The Penang state government approved the spending of over RM300 million for feasibility and detailed design studies for the tunnel and three highways on Penang island, projects that were deemed as low priority by its own transport consultant study, Halcrow. But it does not see the need to spend a small amount to do a comparative financial feasibility study on the different public transport systems before choosing the LRT and monorail, which happen to be the most expensive to construct, operate and maintain. What is with the rush to approve Penang’s biggest infrastructure project to date when these simple questions cannot be adequately answered?

Read his full article on FMT. It is good that young people are taking an interest in the Penang transport masterplan and SRS Consortium’s lavish spending spree. Hopefully, their questions will prompt the state government to call for a much-needed independent review.

Pic tells thousands of words. How many bicycles? Only one. Most of them heavyweights, obesse. Therefore, only one cycle and most do not dress for cycling. They look extra in the waistline, hence hardly cycle or walk. They can’t escape the eyes of Sherlock Holmes.

Shriek has good CSI observations.
These youth could be recruited as new breed of Gerakan to make comeback in GE17, but right now they need good coaches and Anil can instill right morale in them?

Wondering if these youth fellows drive cars or take public buses. Need to have action to back up their speech. Andrew can film Roger and his youth buddies taking RapidPenang to promote public transportation.

These ‘youth fellows’ should have campaigned for permanent car free (allows only bicycles and trishaws) in the heritage zone in celebration of Heritage Day.

These young people likely own and drive cars.
You will not be obese if you take public buses, at least you need to climb up to board the bus.

It is important to have a good public transport management in Penang as Penang is just a small island but is crowded with too many cars.

Great! Who says all of Penang youth go for bin-chui car addiction?
Time for a paradigm shift, try out alternative transports be it Rapid Pg, Grabcar, bicycles or even trishaws. Walk more is a good beginning towards the above alternatives.

I gave up 4WD 7 years ago to minimise car maintenance costs & lessen carbon monoxide (CO) emission to suit my affordable, greener lifestyle of freedom + simplicity + connectivity with Nature. One Life on One Earth, Make It Beautiful + Enjoyable.

What better public transport if today I do not see many youth taking RapidPenang. Talk is cheap.

Nowadays it is considered cool and hip for young people to protest, even if they do not know what they are protesting.

Uncle Tan is smart to cash in on beverages from his customers.

His son also in the shop, not sure same frying skills as his father. Has anyone tried out?

this Uncle Tan is a true original maestro not tainted by commercialism, unlike CEO Tan who had created 2 classes of chendol to maximise profits at expense of heritage preservation.

Duck egg Char Koay Teow is a rarity these days!
The same for Hokkien Mee with sliced duck eggs!
Anyone who knows of this rarity to salivate in Penang island?

Unfortunately like kung fu, master do not pass the skills to disciple. Tunglang being vocal here should encourage and speak to uncle tan. Otherwise it will be journey of no return for pg lang food. Imagine why close for few months? Can’t ah huat chye take over and sifu can take a rest? Tunglang, you want to see another heritage disappear and drive here and there just like one ton mee?

Street food business are mostly family affairs. It’s up to the sons / daughters to take up the skills. Otherwise, the ori-maestros’ secrets will be buried with them forever. But no 2 chefs are the same. Unless scientists can clone Penang’s ori-maestros & we may be assured of original heavenly tastes of street food for centuries! I have yet to come across a Penang famed street cuisine with ori-original tastes dished out by the sons / daughters of ori-maestros. Not even the famed Teochew Chendol @ Lebuh Keng Kwee (this I give a 20% off the original taste of the… Read more »

Teochew chendol of 70s the ice lasted longer. Current one melted the moment being served to you, be it at the lorong or at air-conditioning malls.

Shrieking out on behalf of losing 2 sisters and lorong selamat beret lady and date kramat ah leng and tiger char kway teow also need to pull in customers BUT make sure don’t overcharge the locals, hahaha

Latest video to make you salivate: