Auckland is bringing back trams to its heritage quarter after an absence of more than half a century.

The proposed tram stops will be integrated with future bus stops.

The city’s original trams ran from 1902 to 1956. Their removal in 1956 has now been described as a “terrible mistake”. See this report in the Auckland Trains website. 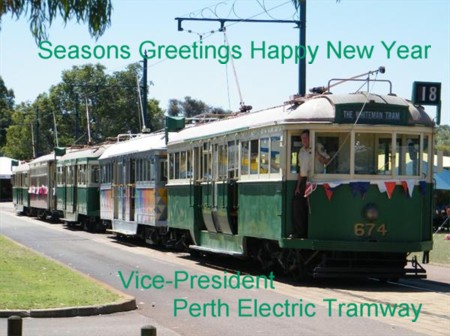 The heritage network could be the first step towards a larger modern light rail network if required. Christchurch has already embraced heritage trams and is now extending its network, as reported on the Tram Christchurch website.

If Auckland can do it, why not Penang, asks retired tram engineer Ric Francis.

Ric is also proposing an LRT system from Penang Airport to George Town.

Having lived in Melbourne for a number of years, I noticed that trams were pretty much part and parcel of the public transport system there. It was THE way to get around town. But to ask for the same service in Malaysia? I applaud the idea, but I wonder how motorists would get used to it. Considering that people generally tend to beat red lights, especially for motorbikes, or when it comes to illegal turnings and the like, putting trams on the street may increase the number of fatalities on the road. (Link: http://thestar.com.my/news/story.asp?file=/2010/9/18/nation/7061384&sec=nation) I reckon that most motorists are… Read more »

Anil,
What about this one ? .http://www.geekosystem.com/china-giant-bus/

Weren’t you extolling the virtues of a pervasive all-bus network a little while ago? I thought I watched a video about it on your blog. Somewhere in South America?

I just saw those links on slashdot, where one of the comments pointed out that cable theft isn’t much of a problem in Seoul or Chattanooga – but I understand it is an issue here?

In the end, it might be good to have a cost-effective fully integrated multi-modal system, all complementing one another – ferries, buses, light rail, trams – with pedestrian- and cycle-friendly streets. We need to find the right combination and the best way to integrate them.

More car-free pedestrian zones would be great too.

Just one more link: London had a fleet of electric buses over 100 years ago with an interesting non-technical problem:

If a heritage system means that Penang has to source for carriages from donors such as Melbourne, the limited supply might handicap future expansions of the network. We also have to remember that a heritage tram system would only work if other initiatives are taken to develop the heritage of the area. Other factors to consider is the capability of the carriages to cross the hills to reach places such as Ayer Itam, Balik Pulau and Batu Ferringhi. An alternative would be to have a modern on-street light rail system that fits into the heritage area whilst serving the wider… Read more »

No reason why we can’t have all three modes — trams and light rail trains and buses – complementing one another.

Interchanges could be built for people to switch from LRT (which could service outlying areas) to trams (in the inner city area) and vice versa. Feeder buses could take people to LRT stations from housing areas etc etc.

Yup, my comments are not to be construed as pushing for any particular mode. What the decisions makers need to do is to ascertain the primary aims of an intended PT improvement before using that to guide the selection of a mode and implementation of supporting policies. To select a mode before making clear the intended outcome risks the wrong choices.

Mr Anil, you are dream talking again. If Penang can’t solve the public bus transit problem, you want LRT and TRAM; totally unrealistic. Where to find the lands and the funding? With no brainers in charge nothing will happen!

Trams,monorails are never cheap and easy to maintain if there is no local maintenance present.
1. Parts, parts,parts!
2. Need a nearby depot to keep/maintain the trams
3. the littering problem must be taken care before install trams.
4. Grids & tracks installation. For tracks, perhaps using “tram on tyres”

OTH, I wonder how much a petrol station land lease cost. In country such as HK, petrol refuel station land bidding,cost a few millions. It is a win win policies to reduce pump inside cities and increase state government coffers 🙂

auckland already has a wonderful FREE bus service for CBD (http://www.aucklandnz.com/index.php/content_B/?L1=65&L2=95&L3=&id=620). The tram idea is just for tourists for Rugby World Cup

Anil Netto
Author
Reply to  whatever

You mean they will dismantle the tram line after the World Cup?

whatever
Reply to  Anil Netto

too early to say, anil, but the rpimary purpose is for the extra hundreds of thousands who will flock to Auckland for the world cup. Tht area where tram is planned does not really hv enough pedestrians,or traffic, to warrant long-term use. The free bus service is very popular. All buses in Central Akl are run on LPG. The public transport is excellent for a massive city (size-wise) with tiny population. Check out http://www.maxx.co.nz

A 1.5km loop? So at a brisk walk you could do the same route on foot in ten minutes? I’ve never thought to ask cyclists who use roads with tram tracks in them how cycle-friendly the rails are. My suspicion is not at all. When I worked in Sydney a long time ago, the locals viewed the monorail there as a white elephant that was of no use to them and limited attraction to tourists. Is this something similar? Why would a tram like this one be better for Penang than buses (which need little in the way of dedicated… Read more »

Phase 2 will see it linking up with the CBD and even more integration with buses.

No reason why it can’t be extended further eventually.

Have a look at the extension work on the Christchurch tram system: