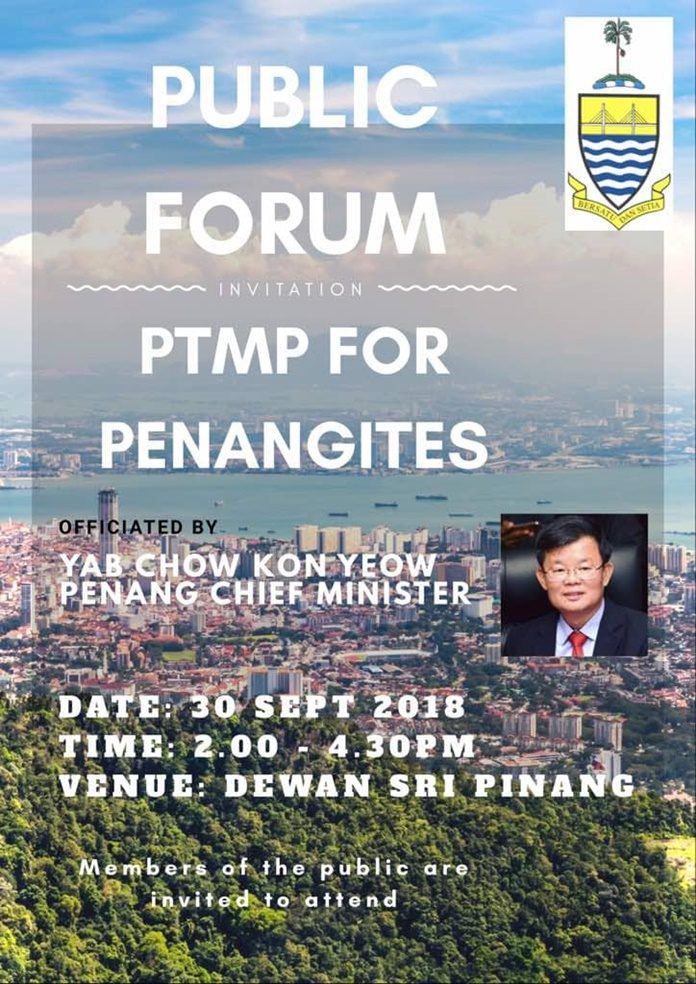 Make sure you come for the public forum on the Penang transport proposals, organised by the Penang state government, at Dewan Sri Pinang on Sunday, 30 September at 2pm. Penang Forum will also be making a presentation.

The following piece is by Roger Teoh, who is doing his PhD at the Centre for Transport Studies, Imperial College London. He is not a member of any political party or NGO in Malaysia.

This latest article on the Penang transport masterplan is in response to former MPSP Councillor Joshua Woo’s letter to the editor “Public transport not profitable, government needs to pump in money”, which played down concerns of my recent findings where the Penang LRT is projected to incur a RM1.2bn loss in ticket revenue over its first 10 years of operation.

The projected RM1.2bn shortfall in revenue over 10 years (or RM120m of losses per year) for the Penang LRT was estimated by scaling down the annual ridership forecast from 42m trips to a more achievable target of 10m trips.

Woo’s recent article attempted to justify this projected shortfall in revenue (RM120m per year) for the Penang LRT by comparing it with the financial losses incurred by other global cities as a result of subsidising public transport. Some examples used by Woo included:

The Curitiba’s Bus Rapid Transit (BRT) system which accumulated an RM1.3bn financial loss over seven years (or RM186m of losses per year)

Singapore’s public transport system which the government subsidises as much as RM12bn each year, and

London’s public transport network which has an annual grant of about RM3.7bn.

While it is useful to conduct a comparative assessment of other public transport networks around the world, such comparisons on an absolute scale are fundamentally flawed. Firstly, the population of Curitiba (2.0m), Singapore (5.6m) and London (8.5m) are significantly higher than that of Penang Island (with only around 780,000 people).

Thirdly and most importantly, the public transport subsidies and financial losses quoted by Woo for Curitiba, Singapore and London are for the entire public transport network. For example, London has 12 Underground lines and its local bus network is one of the largest and most comprehensive in the world with over 700 different routes, while Singapore has five MRT lines and more than 300 different bus routes.

On the other hand, Penang’s projected shortfall in revenue of RM120m per year is only for one LRT line and not the entire public transport network. It is also worth noting that the estimated annual loss of RM120m for the Penang LRT line will be approximately 20% of the state’s revenue, given that the estimated revenue for the Penang state budget in 2018 is around RM500m.

Therefore, can Penang really afford this LRT system? Given that modern trams and BRTs are shown to be cheaper to build, operate and maintain, how did the Penang government arrive at the conclusion to build LRTs over BRTs and modern trams? Have comparative studies been conducted in a scientific and quantitative manner?

Modern trams not chosen because of flash floods?

While it is acknowledged that Penang Chief Minister Chow Kon Yeow recently explained that LRT is selected ahead of modern trams due to the concern of flash floods in Penang, such arguments are highly ludicrous and are illogical.

Is the Penang chief minister implying that Penangites should brace for more flash floods in the foreseeable future? If so, has the state government given up on its flood mitigation efforts which were previously promised to Penangites? Shouldn’t the Penang government be addressing the source of flooding and removing the causes?

In addition, by comparing the figures quoted in the SRS proposal and the Halcrow report, it is shown that the “construction cost per km” for modern trams (at street level) is approximately 75% cheaper than an LRT system.

Hence, instead of choosing the most expensive LRT option costing over RM8bn, why not use the funds more efficiently by selecting a cheaper public transport system (modern trams and BRTs) and re-allocate the remaining funds for flood mitigation projects?

Regardless, the general public is still waiting for Woo, the Penang government or SRS Consortium to provide more clarification on the ridiculous ridership forecast for the Penang LRT.

Does the 42m ridership forecast for the Penang LRT within its first year of operations not seem ridiculous to Woo?

For a comparison, Kuala Lumpur has a population of 1.7m in 2016, yet the new Sungai Buloh-Kajang (SBK) MRT Line only managed to record an actual ridership of 22m within its first year of operations.

Even Transport Minister Anthony Loke had highlighted that the LRT might not be the best option for Penang.

By persistently defending the SRS proposal, it clearly shows that the Penang government has very early on aligned itself with SRS Consortium.

Given that no agreement between the state government and SRS Consortium has been signed, why are Woo (currently the strategic communications manager for Penang DAP) and the Penang government not adopting a neutral stance by addressing these concerns raised by civil society as we would expect from a government?

The event may serve street foods to gain support, so eat and enjoy the talk but use your logical mind to decide what you want for Penang

So many cars now on the road of the island.
For that LRT is welcome.

No way Penang can be free of flash flood. Its climate change and normal development. Singapore planned their drains many decades ago and still have flash floods.

All coastal cities are susceptible to flash flood. High tides and canals having small gradients result in water unable to discharge asap. Further one as to look for amount of rainfall. Recent super typhoon in hong and results in rubbish filling up 12 footy size pitch. Lucky the use old airport kai taik

The biggest flaw is Michele Yeoh (who supported the kleptocratic government under former PM Najib) now wanting to capitalise on the 1MDB scandal by co-producing the ‘Billion Dollar Whale’ movie.

She should be the last Malaysian to even think of profiting from the 1MDB scandal from the manner she defended Najib during the 2013 GE. Clare Brown is the true hero.

We should read out Roger Teoh’s questions in the forum to allow our CM and the panel an opportunity to answer them.

Orso include Tung lang’s questions. He has many and let us hear Tung lang’s warning to him as otherwise one term CM.

…Penang Forum vs Penang Government.
Peace is priority despite differences in opinion.

From what I see, Penang Forum supporters are peace-loving. Over 10 years, no incident.

After 10 years, PF may be desperate this time and ruckus may ensue…

Why lah, you wanna cause trouble Izzit?

Quote: Instead of choosing the most expensive LRT option costing over RM8bn, why not use the funds more efficiently by selecting a cheaper public transport system (modern trams and BRTs) and re-allocate the remaining funds for flood mitigation projects? This is very obvious instead of putting fear of (constant, yearly?) flash floods against modern trams & BRTs. Is Pg Gomen giving up on its flood mitigation efforts so fast? Here, you are presented with a cost saving option which can ‘kill 2 birds with one stone’ but you are still bent on using an ‘expensive cat to catch a bird’.… Read more »

Ah pek. You think trams are chip chip? What half Crow knows about tram. Go an ask city of Edinburgh. They complete a third but over cost by few times and delay. For Trams have to dig the road every inch. When dig the road, your favourite one ton mee and lim kopi has closed. The tram can’t run if both ends are incomplete.

Pg forum pick and chose. Why they no tell truth about trams in Sydney and Edinburgh? They went over cost and delays. Shop fronting the lines lost business. A girl get a shock , not shiok from short circuit. Pg forum tell trams in green field not brown field like pg where there are highrises flats and house. If built further away from these areas, ah peak and ah moi going to take them? Anil shows the green tram or light rail from China. Very basic, what power that tram and make runs? How much electric power to last the… Read more »

FYI, modern hi-tech trams (by China) have no physical rails but run on sensors, dude!
This is your problematic shrieking in a washing machine!

You can’t understand what is a tram? What sensors? Driver is the sensor. If too sensitive it will not move. You just a Godfrey vacuum cleaner.

If a library can disapper under [email protected] at Bayan Baru, some of your favourite haunts could also disappear under PIL?

YB Sim may consider reinstating Bayan Baru library at one of the empty shoplots of D’Piazza?

Can update us the outcome of Penang Forum’s confrontation at the forum?

I just drove a friend to the Penang International airport from Tg Bungah and back today Saturday at 12.30pm. I took me an hour each way. There was not much congestion at the Bayan Lepas FTZ. There were two bottlenecks though at traffic lights at the Turf club and at Sunny Point/Sungai Dua.
Can we have flyovers here first quickly? Likewise, let’s have flyovers along the LCE expressway at the double traffic lights near Weld Quay.
While building LRT or tram, it will take time and lots of roadworks. Clear these congestions first. They are much easier projects.

Such projects are probably too cheap for them. They need to justify massive land reclamation by going for mega projects.

Same peng land too small. Ah pek says living in highland too dangerous. Safer on coastal low land. Cannot do anything above the 250 king foot. Why imperial units when we go metric in 1970?

Try to repair computer smartphone. They cost more. It is cheaper on bigger projects as the establishment cost is there where small or big projects.

It is for the public. Everyone is welcome. I am sure state government will be bringing their supporters too.