The following piece is by Roger Teoh, a PhD postgraduate studying at the Centre for Transport Studies, Imperial College London. It raises pointed questions about the serious flaws in SRS’ mega shopping plan for transport infrastructure and massive land reclamation in southern Penang Island.

In recent week, members of the public have shown a renewed interest in the debate on the Penang transport masterplan, and advocates of the SRS transport proposal have been quick to come up with supportive arguments to justify the mammoth RM46bn project.

The main aim of this article is to critically analyse the validity of the different arguments raised by proponents of the SRS proposal and to lay down a list of important questions on the masterplan that remain unanswered by the Penang state government since December 2016.

By and large, I believe that the general public would agree that an open debate on the SRS proposal would significantly improve transparency, instead of relying on internal communications where unfavourable viewpoints on the present form of the masterplan could be swept under the carpet and left unattended.

What is so interesting in or around the three SRS reclaimed islands to the point that population density is projected to be higher than the city centres of London and Paris? Why would 367,379 Penangites choose to squeeze themselves in these islands by 2030 when there are less dense areas available elsewhere in the state?

Is such a population density figure justifiable, given that Penang is not even one of the top three biggest cities in Malaysia? This is not rocket science. Even students in elementary school would find these density figures ridiculous, and it would be shameless for the Penang state government to continue defending the use of these figures.

We once ridiculed BN politicians for not questioning obvious flaws. It appears that the lack of questioning of these population density figures by the Penang state government will make them a laughing stock.

Proponents of the SRS proposal have also justified the need for more roads and highways to “future-proof” the city as the use of disruptive technologies, such as ride-sharing services and autonomous vehicles, become more widespread.

It is well known that Singapore has been one of the world leading cities in pioneering the development and use of autonomous vehicles and ride-sharing initiatives. But Singapore continues to heavily focus on improving mass transit, as reflected in the construction of three new MRT lines (Thomson-East Coast MRT Line, Jurong Region Line, and the Cross-Island Line). This is in addition to the fact that Singapore already has five existing MRT lines and it’s car modal share is only 33.2%.

Additionally, Singapore has also adopted a vehicle quota system since May 1990 to restrain the growth of private vehicles in the city-state. It is mandatory for Singaporeans to obtain a Certificate of Entitlement (CoE) through an auction platform to register a new vehicle.

Despite the arrival of “disruptive” ride-sharing and autonomous technologies in recent years, Singapore’s Land Transport Authority (LTA) continues to cut the allowable annual vehicle growth rate in Singapore. Since February 2018, the allowable annual vehicle growth rate is set at 0%, meaning that the absolute number of vehicles on Singapore’s roads is expected to remain constant in the foreseeable future.

While SRS Consortium frequently used Singapore’s upcoming North-South Expressway in its engagement sessions to justify the case for even more highway construction in Penang, such arguments are highly misleading.

The North-South “Expressway” – originally conceived as a 21.5km expressway – has since been redesigned as a North-South “Corridor” (NSC) to better enable cycling and walking. It will be Singapore’s first integrated transport corridor featuring continuous bus lanes and cycling trunk routes.

Therefore, why was inaccurate information presented by SRS Consortium in its engagement sessions? Is this a desperate attempt to mislead the public and rally support for the RM46bn SRS transport shopping spree?

Despite Penang having one of the highest car modal shares in the world (96.8%), the state government continues to prioritise vehicular traffic over mass transit, as reflected by the construction of six major road highways (PIL1, PIL2/2A, the North Coast Paired Road, the Ayer Itam-Lim Chong Eu highway, the Inner City-Lim Chong Eu highway, and the Penang Undersea Tunnel), and only one new LRT line (Penang International Airport – Komtar).

Given that Singapore and Penang islands face similar land constraints, why is traffic congestion a regular occurrence in Penang but not in Singapore? The answer clearly lies in formulating the right transport policies.

Any form of “disruptive technology” that still relies heavily on cars and road networks fails to address the space inefficiencies of vehicles as a means of transport. To illustrate this point, the figure below shows the amount of road space required to transport the same number of passengers by car, bus or bicycle. 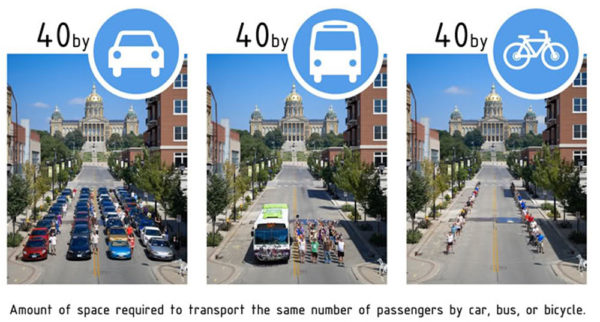 It is clear that focusing on mass transit and sustainable transport modes is a more effective solution to enhance urban mobility, especially for a growing city such as Penang island, where free land will always be a scarce resource.

Therefore, the justification for more road construction as a result of the arrival of “disruptive technologies” is not credible and does not make any logical sense.

If ride-sharing initiatives are expected to reduce the number of private vehicles on the roads, why is there even a need to increase Penang’s road capacity in the first place? Could the Penang state government kindly name us one city that plans to promote more car use and construct more roads as a result of the surging popularity of ride-hailing services?

On the whole, a list of critical questions on the SRS proposal remains unanswered by the Penang state government since they were first raised in 2016 by myself and various NGOs:

Given that the benefit-cost ratio is the most fundamental metric used in feasibility studies to compare different projects, it would be alarming if the Penang state government fails to provide us with a comparison of the values between the present form of the SRS proposal and the alternative plan (proposed by Penang Forum).

The Penang state government approved over RM300m for feasibility and detailed design studies for the tunnel and three highways on Penang Island, projects that were deemed as low priority by its own transport consultant study, Halcrow.

But it does not see the need to spend a small amount to do a comparative financial feasibility study on the different public transport systems before choosing the elevated LRT and monorail, which happen to be the most expensive to construct, operate and maintain.

What is with the rush to approve Penang’s biggest infrastructure project to date when these simple questions cannot be adequately answered?

Governments should never be afraid to change their minds based on evidence. It is worth noting that smoking and lung cancer have a lower statistical correlation than car modal share and highway-building, yet people still choose to listen to their doctors and remain sceptical about NGOs and transport planners.

The Penang state government should stop labelling NGOs and transport planners that do not conform to the present-form of the masterplan as “enemies” of the state.

Perhaps a good starting point would be to adopt the UK government’s Green Book on Appraisal and Evaluation as a fundamental guideline to assess different proposals to enhance transparency and restore public confidence.

While Pg state gomen dizzily pursues the unsustainable property bonanza of 3 massive islands tied to PTMP Financial Tua Kang, New Zealand is closing the lid to international property market frenzy. New Zealand bans sales of homes to foreigners https://www.bbc.com/news/world-asia-45199034 New Zealand’s Trade and Economic Development Minister David Parker described the passage of the bill as a “significant milestone”. “This government believes that New Zealanders should not be outbid by wealthier foreign buyers,” he said. “Whether it’s a beautiful lakeside or ocean-front estate, or a modest suburban house, this law ensures that the market for our homes is set in… Read more »

Ah pek, why don’t u migrate to kiwi? U live long with nothing to worry. Everything is 110℅ perfect.

The first phase of Penang Sentral would serve as the terminal for both public and intercity buses and is physically connected to the adjacent Butterworth railway station and Penang Ferry Terminal.

It consists of a five-storey building to accommodate bus ticket counters, 38 bus bays, 55 retail shops and one food court as well as 577 parking bays.

Better not abolish toll otherwise more cars on the road.

Totally agree. Toll transfer to state. Toll as a form of area licencing or surcharge to central area

Prime Minister Dr Mahathir scored a high approval rating of 71% as the Pakatan Harapan administration approached its 100th day in office, according to Merdeka Centre.

The pollster, however, noted that his rating dropped 12% during the period between May 31 and Aug 11.

Despite this, Mahathir outperformed his predecessor Najib, whose highest rating following the 13th general election was 62% between June and August 2013. Prior to GE14, Najib’s rating was a dismal 38% in April.

Anwar is nervous, as Mahathir is now grooming Azmin?

Imagine this type of road bridge with flying cars just above + behind the vintage view of Kuan Yin Statue @ Kek Lok Si Temple. I would shudder if Kuan Yin starts to weep. Can anyone recall the Goddess weeping days before the Penang Jetty collapse tragedy? Many thought Komtar Tower would collapse.

Why so bad mouth, no good to curse.
Say positive things in this month.

Guiness Stout for Phor Thor Ho Hia Tee!
One month of happy eat, drink & be merry in human world of misfortune. Yet Ho Hia Tee are gleeful cos they can get replacement for their reincarnation. I have yet to see Ho Hia Tee bring good fortune to human world during Hungry Ghost Month. Or for that matter, any month in Chinese Calendar.
Cheers Guiness Stout, pretentious Ho Hia Tee!

I am not chinese but I suggest you pray pray, not play play on this matter.

Have to 4 give ah pek