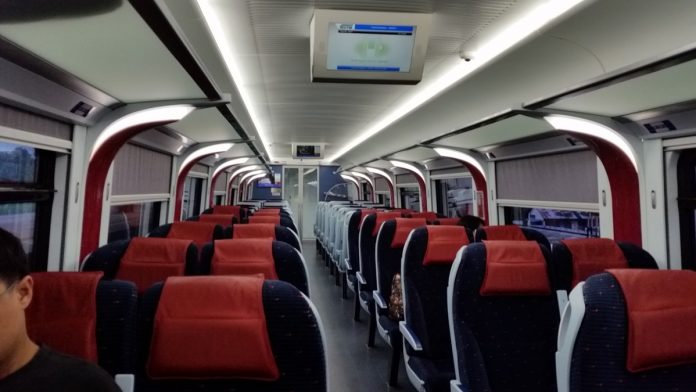 I knew this would happen.

Just when KTMB is doing well and packing in passengers into new electric trains after billions of public funds were spent on double tracking, along comes Transport Minister Liow Tiong Lai with an announcement that the authorities plan to allow private companies, apart from KTM, to operate rail services on inter-city routes.

For years, KTM had suffered due to underinvestment in rail infrastructure and neglect of rail services in favour of the so-called ‘national car’ project and focus on tolled highways.

Now the new electric trains are full and people even have to book in advance. Over Christmas, tickets from Butterworth to KL Sentral were sold out for a week from 21 December to 27 December. Extra services were introduced during this period and even these were sold out.

Now that KTM’s new electric trains and double tracking have raised the popularity of rail services, PRIVATE companies are interested in cashing in – after massive amounts of PUBLIC money were invested in upgrading infrastructure.

Fares now are quite affordable – RM59 from Butterworth to KL Sentral – and the railway is now an attractive and more relaxing alternative mode of transport to driving or flying – especially for those without cars or those who prefer not to drive.

Public transport should not be run like a profit-maximisation business. Fares should remain low or even be subsidised to encourage motorists to ditch their cars and hop on a train, thus easing congestion on the roads and reducing motorists’ petrol and toll burden. It is also environmentally friendlier.

Of course, the pro-business MCA-paper The Star appears to be in favour of this proposal with a page 2 commentary titled ‘Competition good for rail services’. The MCA is Liow’s party.

Cancel the Penang port privatisation for PPSB’s failure to provide a satisfactory ferry service. If not, you should resign and not try and burden rail users with another privatisation debacle.

Anil, what’s happened to 5 major developers article a while ago?
Flip flopping?
Where is your supposed mighty river?

Im not sure how it went offline. I have put it back on now. Thanks for pointing it out.

Make sure your blog is impenetrable as the Great Wall of China?
May the Force of Light + Justice be with you.

Privatising KTM may not be such a bad idea. Let’s face it – KTM is bleeding money and inefficient (its like MAS on rails)
For example KTM Komuter which should have lots of passengers considering its servicing the densely populated Klang Valley. And yet it has a “funding gap” of RM200M.

Of course privatisation is a double edge sword. In the wrong hands, it will retain the same issues.

No reason why KTM cannot seek funding of its own.

Just like TNB could have upgraded the capacity of its plants, if the government had given the green light, instead of privatising to IPPs – with disastrous results. Ask Ani Arope what happened.

A digression sorry
Mail circulating in Internet
Ccre the partner for bandar tun razak deal made announcement to hk stock exchange
Deal is for RM 5b+ and not the figure of RM7b + as per signing ceremony
Dun know how true is this mail
Can someone confirm?

Yes, I have seen it. Didn’t have time to verify if it is true.

MCA needs funding from cronied ventures in order to sustain in political survival game having learnt from abang be-end.

But MCA can no longer sustain itself in the Malaysian school history book that has conveniently ignored its contribution for independence of Malaysia.
http://www.themalaysianinsider.com/malaysia/article/mca-now-history-after-school-textbook-fail-on-leaders-contribution-says-dap

The issue really is our govt do not know how to do government. Our politicians are not even politician, not the real kind they are simply OPPORTUNISTS.. Given all the bad publicity about rising cost and, as you point out, piratisation that is a big part of the problem, Liow, the head of a major component party DO NOT HAVE THE COMMON SENSE TO SHUT UP ABOUT TALKING ABOUT THIS?? Rail service is so bad after so many years of neglect. Now that the infrastructure is going to put in place, how hard it is to really just run it… Read more »

Khi liau (or liow sama sama bo liau). Privatisation in Boleh Land spells doom for the affected corporations or services in the name of Apa-Nama Initiatives for khang thau & not for corporate responsibility to deliver (at all costs). Just look around & you will see the same (same-sama) pattern of deliverance of privatised services, coming to bo liau some years after grandeur of hoo-ha & ribbon cutting PR & promising share offerings. The receiving end of bo liau are the warga negara yang berharapan tinggi. Janji tak mungkin ditepati is the current corporate sing-song of privatised corporate board rooms… Read more »