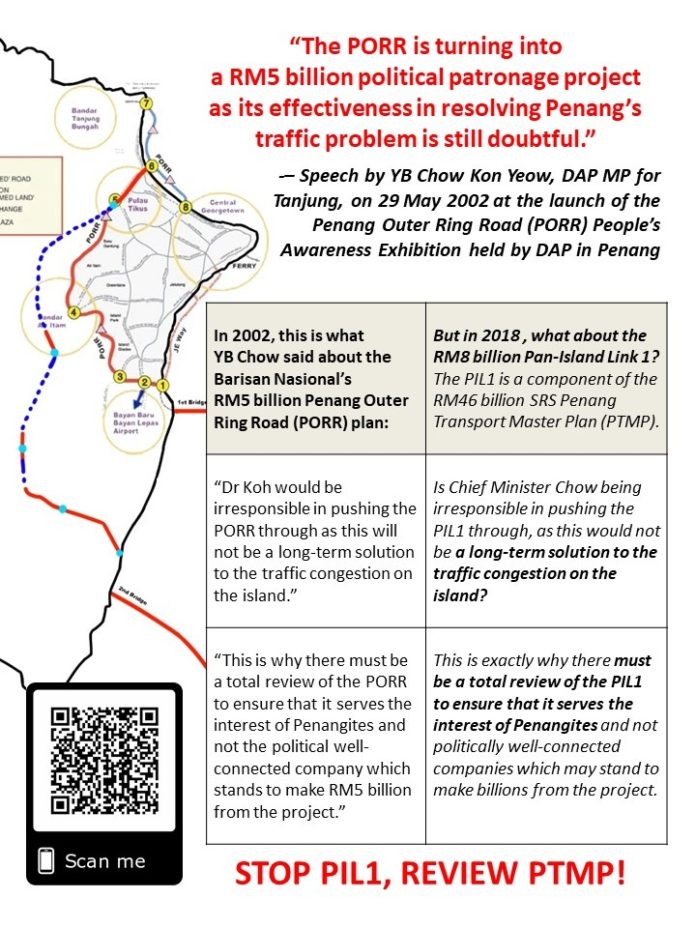 The irony back in around 2002 was that the then opposition in Penang, which is now leading the Penang state government, joined residents groups in leading a spirited campaign against Porr. The successful campaign led to Porr being aborted.

But Porr, which was to be financed by 500 acres of land reclamation, has now morphed into PIL, which is backed by the state government.

Back then, the opposition correctly pointed out that building a new highway “will not be a long-term solution to the traffic congestion on the island”. It also called for “a total review” of the project “to ensure that it serves the interest of Penangites and not the politically well-connected company which stands to make RM5bn from the project”.

Check out the full context of the remarks in 2002.

Compare and contrast the alignment and the different political positions in 2002 and 2018. Deja vu.

Meanwhile, signatures for the online petition against the highway have surpassed the 5,000 mark. Do sign on to indicate your concern.

Affordable DrM’s Perotiga project will stimulate more car buyers to further the havocs on the roads of island.
Presently many free buses but youngster s no bin chui to ride them.

How dare they still want to start that silly thing without consult us ? If demonstration is not enough to let them listen then, apply for a court injunction ! GEORGE TOWN: The approvals from the federal authorities for the RM8.4bil Bayan Lepas light rail transit (LRT) and the massive Penang South Reclamation (PSR) scheme on the southern coast of the island are expected to be obtained before the end of the year. Sources told The Star that the approvals would be from the Department of Environment, the federal regulator overseeing Environmental Impact Assessment (EIA), and the Transport Ministry. The… Read more »

As I said, the Legacy of Tokong Arrogance lives on!
Nyiamak for trying to fool us time & time again with claimed public consultation but no cameras.
No wonder the anticipated blasting of hills for the tunnels is a source for filling the sea reclamation for the 3 untouchable islands. Trying to fool us!

Now, we can recall fond memory of Dr. Koh who was being so much demonized by the present despicable Developer Association Penang ! At least, Dr. Koh was so much reasonable !

Responsible for land taken by dummo and sell chip chip. Former ijm wanted to build hostel for uni students but former cm machai said gilakan oredi give him the land and now hostel cannot be built

No development means reasonable?
Between 1980 and 2000, Penang fell behind Singapore – many Penangites headed south to work. Today an average Singaporean can afford a HDB apartment, not so for a typical Penangite, even with a USM degree.

Penang is not Singapore, you ignoramus. And the mentality that “development is paramount” only benefits capitalist drones like you who think crowded, expensive Singapore is a nice place to live. Why don’t you move to Singapore then…? …

What do you mean by no development? We want sustainable development that serves the needs + wants of the public & NOT THE GREEDY DEVELOPERS.

Sustainable development , very BIG word. Please elaborate and explain your house and business is so sustainable. Dont use big words to bully others.

Eg. Your shrieking is unsustainable, param kah???
More of noises in dialogues!!!

Ah pek in the end, you still cannot explain sustainable development by developers. Still want to bully others with BIG words.

If you still can’t understand sustainable development after trolling here for God knows how long, either you don’t understand simple English or your shrieking just dumb your brain!

How about the time Dr. Koh was reasonable yet being demonised by Umno? Check this to refresh your memory:
http://www.bintulu.org/2008/09/09/photos-of-ahmad-ismail-supporter-tearing-koh-tsu-koon-picture-refer-malaysiakini.php/amp

“Mirror, mirror on the wall.
What I chow-chow today sounds too familiar to what I chew-chew in 2002!
But I cannot be a gentleman like KTK!”

16 years ago, Chow Kon Yeow was on the side of residents who were against the proposed Penang Outer Ring Road (PORR).

Now, as the Chief Minister, he found himself on the opposite side defending the state’s extensive transport plan for the traffic-clogged island.

Did Chow see the tango with developers in Komtar, fell heel over head in love & was UBAH like that Deity?
Never trust any politician who can master the Opera Chinese Art of Change Face a thousand times!
Now is Hungry Ghost Month! There are some, who like the hungry ghosts love to see more of Change Face coming from the 28th Floor of Komtar Tower of Arrogance!

Even if Pil is scrapped today, more roads will still be built in the future to cater for the ever increasing car growth. Unlikely for young cosmopolitan Penangites to take public bus (prefer to own/drive car for convenience & status, availability of Grab). So need to study the root cause, as protest will not solve the longer term problem.

Yesterday, there was an accident at the traffic light junction of Gottlieb Road / Burmah Road in front of Pg Chinese Girls High School (PCGHS). A Mini Cooper driven by a young 20yr old lady coming from Bagan Jermah (allegedly running red light) hit a PCGHS Form 6 student motorcyclist who was turning right towards Pg Adventist Hospital. I have personally seen many of such young + dangerous antics of young Penangites in MyVis, Kenaris & Mini Coopers driving as if the roads (the wide 3 lanes ones) are their rally circuits to boost their altered egos esp. overtaking on… Read more »

Nowadays Millennia Chinese (born after 1990) no longer start with Boon Siew 70cc Honda kapcai, but buy MyVi or Axia as their first personal vehicles (9-year loan). Mostly are ill-inspired by movie stunts, from Fast & Furious to the current MI:Fallout, but end up haphazard and dangerous driving.

They don’t care what is road safety until they kena ‘tanggung lesen’ for dangerous driving that may cause death & damages to innocent road users. Parents will have to pay the price for their follies.