Penang Forum met up with new Penang Chief Minister Chow Kon Yeow at his office in Komtar yesterday evening. Among the issues raised:

Other points highlighted were:

This is the media statement that Penang Forum released today:

Daim Zainuddin, the chairman of the Council of Eminent Persons, announced on 18 May that the council would review all mega projects to determine “if they are to our advantage”.

While Daim is presumed to be referring to projects involving foreign interests, Penang Forum would like to ask that this call be extended to cover all mega projects regardless whether the parties involved are foreign or domestic. Indeed, the pertinent question here is whether the mega project will not only benefit the people but will also protect the environment for future generations.

Penang Chief Minister Chow Kon Yeow recently announced that the state government would prioritise and hasten the implementation of the Penang transport masterplan, which is a mega project estimated to cost RM46bn.

We call on the PH state government to review this mega project because the Pakatan Harapan’s Manifesto Promise no. 39 ‘Balancing economic growth with environmental protection’ has a commitment to improve public transport.

Given the scale of the funding for this mega project the state must ensure government procurement produces the best value for taxpayers’ money (Promise #23). The awarding process used was based on a Request for Proposal, rather than a true open tender, which did not allow for any meaningful comparison of bid documents as the scope of work was not fixed. Hence the award process must also be reviewed and revisited.

Furthermore the present transport masterplan was based on the assumption that buses, ferries and a cross-channel bridge were under federal control and there was nothing the state could do about it. So it did not focus on how these could be improved or expanded. But now that circumstances have changed, the plan needs to be revised.

Planning for equitable public transport should take into consideration the following criteria:

The 2016 transport proposal is a mega project put forward by SRS Consortium to the Penang state government. The design and planning fails to meet most of the above criteria. The overpriced package includes many components of mega-road building that will discourage people from using public transport and undermine the stated goal of increasing public modal share of transport. Although public consultations have been held about impacts in specific localities, open scrutiny of the whole design was strongly discouraged. 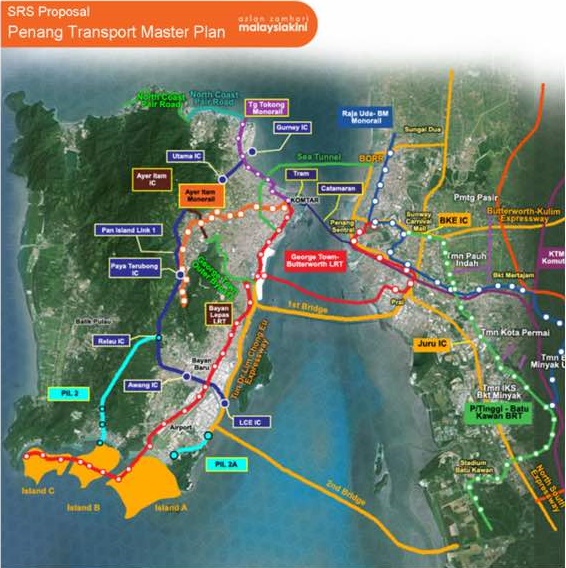 The original Penang transport masterplan by Halcrow involved public consultation, but the state pressured the consultants to add the undersea tunnel and three highways costing a total of RM6.3bn just before it adopted the plan in 2013.

The SRS proposal costing RM46n includes a proposal to reclaim 4,500 acres of land (comprising three islands). It departs drastically from the officially adopted 2013 Halcrow masterplan. Thus, a thorough, proper and independent review should be carried out to ascertain its suitability, viability and sustainability.

The massive proposed reclamation will destroy fishing grounds and jeopardise fishing livelihoods and a vital local source of seafood. It will be environmentally unsustainable due to expensive maintenance costs (required for dredging) in the future. Promise 10 of the PH Manifesto talks of ensuring food security and protecting the welfare of farmers and fishermen.

Last but not the least, with rapid changes in public transport technology and new trends in info-mobility, it is imperative that any existing plan for public transport should be re-examined. A new public transport design has to be integrated to encourage, walking, cycling, and bus use.

In view of all the above considerations, Penang Forum calls on the PH government, which promises accountability, transparency and openness, to exercise fiscal prudence and to review the present RM46bn SRS transport proposal in line with PH’s promise to review all mega projects that may not be advantageous to the people.

It’s better directly tell the new CM, your hot seat now is being given, not earned. Obviously, People’s power can always dictate what you are, beware !

Good to be in penang forum or keyboard worriors. No responsibilities. Not only ine stake holder but many with opposing demands. Relocate the airport and the land can do whatever pg lang wants. Airport is like former kai tak aiport. Just look at pg island map. Occupies more than 15% of the island, nosy and bring more people and pollute the island.

You must be a die-hard DAP supporter !
Do you think absolutely this new CM’s capability is totally no question ?
See how indifferent he reacted to the poor people’s eviction in Riffle Range flat ?

What you? Poor has right not to pay? if you are landlord, poor no need to pay? Even in welfare society in the west, the poor living in housing commission has to pay rent. The dole received is deducted to pay his rent. Even if any debts ie once he is well do but become poor, he has to pay his taxes. Otherwise all the poor can give excuses.So try telling revenue dept not to collect his tax because he. Is poor now? The poor is not only state gomen ‘s care. How much state gets from central gomen? It… Read more »

CM Chow must stay strong and not bend to unnecessary pressures.

They are selfish people who are not interested in progress. They are retirees who want Penang of 30 years ago, slow pace and less traffic. Perhaps they should consider relocating to Taiping?

Here’s my meme + caption for this archival moment of playing hardball:
Angela Merkel, German chancellor: “Now listen here, naughty cowboy. Either you are with us or against ALL of us!”

Once voted by the people, don’t conveniently forget the people. People who voted Pakatan Harapan include the haves & have-nots. So, don’t forget this. I heard that those evicted have not paid up their rentals. Find the reasons why. Pls don’t simply evict them as they are not stray animals. Treat them with dignity even as they don’t have money. Let them have some harapan (hope). PSM, you are doing a good social job even though you are not voted in. Note: the future political paradigm shift (in 10 years time) may skew towards socially caring parties like PSM. Eg.… Read more »

Ah pek, caring needs $££€¥. Photocopy or print more? In past, focus was given to ibe group. Even the very rich gets scholarship or discount. Why dont shout at that time? Why takes 2 election for the change? It takes time to rebalance. Best is to pay more income tax….

Pg lang is so demanding. Wants gomen to built bus shelters and libraries and equiped with computers and yet want give free housing? Just free loafers. Pg gomen does nof collect personal income tax and how much tax does rakyat paid? About 10% as compare to 30 to 50 % in western socities. Unemployed gets dole and retirees get pension and sick can see a GP free? . Every suburb has a library and use of computer. How about paying more taxes?

Let me be a devil’s advocate.
Penang Forum is advocating the state government MUST
1. review, review review
2. not cut hills
3. not reclaim the shores
4. prevent flood
5. find land to build low cost housing
6. find low cost housing to take care of foreigners
7. and review, review review
Penang Forum should also propose solutions to achieve the above.

Solutions were indeed proposed at the meeting with Chow.

There’s plenty of land for low-income housing the state government could have if it didn’t sell large tracts of land to high-end developers, private hospital, etc Besides, the population of Penang is increasing only marginally and there are already lots of empty high-end condos.

For flood prevention measures, look up how to create a sponge city.

Flood prevention – tackle the root causes of the flooding. Explained to Chow.

More info on some of the questions you raised can be found at penangforum.net

It doesn’t look as if this new CM is going to give up easily on issues, hopefully he is not arrogant as you perceived him to be.