As the streets in Penang become increasingly congested, bicycles are making a comeback. As more and more Penangites pedal around, the quiet cycling revolution is getting noticed in the media. 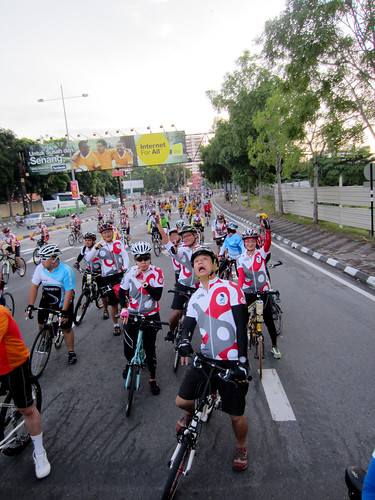 Despite the dangers on the street to cyclists and the occasionally sweltering heat, not a few people believe pedalling around is the way of the future.

And the future begins now! See this report in the Malaysian Insider. (Thanks to blog reader Tua Kee for the link.)

At the last round-Penang Island cycling event, some 3500 people took part in the campaign for a cycling lane.

Hopefully, even the Mat Rempits will turn to bicycles one day!

ya, i think most people cycle for the fun of it on sunday only.

Anyone that can’t move without their car and live without the “cool air con”, they can have all the “cooling” when enter the operation room to clear their blocked fatty blood vessel.

You are very right. The cases of coronary heart disease and diabetes is rising at a rate that would scare anyone. Almost every one in two patients above the age of 50 at the hospital suffer from these diseases. But with so much stress and work, I doubt many Malaysians are bothered about it until it hits them.

Cycling is stupid when you have air cond in your car !!! Please don’t do stupid thing by making lanes for bicycles !!!

Only an idiot would say cycling is stupid because beside car and aircon one need the open air, exercise and non pollution of the environment. Frankly speaking I really think it is very stupid to TOTALLY rely on car alone for our needs. What can we say when they want to make sure their cronies will not lose out in the car business

I can’t see why you are resistant to the idea of cycling. Nobody is forcing you to cycle. What is wrong in having bicycle lanes? They ensure a safe journey for both the cyclists and other vehicles on the road? You may be rich, have a car with air cond and other luxuries in life but there are those who cannot afford those luxuries. Cycling may be a sport or recreation to some but to a lot of others, it is their only mode of transport. We should look after their interests too. Likewise I have always advocated having walkways… Read more »

These people are only cycling for the fun of it or just doing it for exercise. Recently I also many many cycling up to the Penang Dam. After this they will go back to using their cars and vehicle to work, shopping or going somewhere else. What we want is for the people to try and use the bicycle as much as possible or most of the time such as using it for errand, going to work etc etc unless when you have no choice but to use the car or vehicle. Only then will it achieve the desire purpose… Read more »