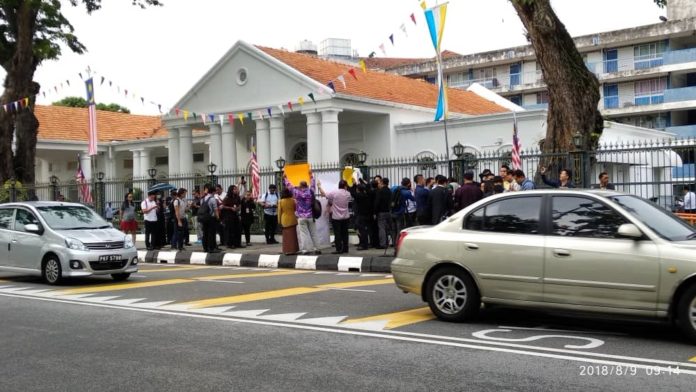 A gathering in support of a proposal by a contractor and two Penang-based property developers to put up RM46bn of transport infrastructure fell flat when only about 10 people turned up.

A couple of people believed to be associated with the project proponent/key backer were seen outside as well.

Increasingly, SRS Consortium’s RM46bn plan is being seen for what it is: a property play using exorbitant spending on regressive transport infrastructure to justify massive land reclamation (4,500 acres) – much of this land to be sold to developers, mostly for high-end homes priced well beyond the reach of ordinary Penangites.

While the internet petition got more than 10K people sign up.

Like the turnout against the tunnel was that many more and ALSO plenty of reporters. Statistical insignificant difference.

The Malay Mail Online has a more comprehensive report on the contention over the PIL1 and LRT projects. The Malay Mail Online reports:- A spokesman for the workers, Mohd Nasarudin Sultan, said he has collected signatures from 1,011 people at factories in Batu Maung and Bayan Lepas expressing a desire to see the infrastructure project realised. “We are fully supportive of the Pan Island Link 1 (PIL1) and the light rail transit (LRT) projects as most of us working in Bayan Lepas and Batu Maung have to face two hours of traffic congestion to get to work daily,” he told… Read more »

The answer is a special lane for buses or bus lane at peak hours. Cars are not allowed to use the bus lane and buses have priority over cars and cars must give way to buses.
Tram is not the answer if pg mtp follow hongland like those in western district to shau kei wan. In new territories, the light rail is similar to trams except they do not share the right of way with others except at traffic junctions.
No need rocket science just be aware of mana ada system

“The answer is a special lane for buses or bus lane at peak hours. Cars are not allowed to use the bus lane and buses have priority over cars and cars must give way to buses.”

A good idea in principle. However,that was tried on Jalan Syed Putra, a major road in Kuala Lumpur since 1990 and enforcement was ineffective.

This is Bolehland after all, where mana ada sistem and everything boleh (including driving on the wrong side of the road against traffic), hence anarchy and chaos.

But we are in the new Malaysia, where things are now supposed to be different? If South American countries and Jakarta can have BRT, why can’t we?

In Malaysia, personal car drivers assume they have the right of way, the bigger their cars. Some even park their cars blocking the bus stops. Already double parking is gaining much attention after the recent Bentong incident.

In kl and past, everything is umno and ketuanan mata2 how to book? Otherwise will be cooking mushroom. Brt is fine but who is providing the land. Is pg forum willing to give up the land for brt. Accountant must orso know the rate of return. Brt to factories is dead after 6pm. Hantu will be using the empty road. Instead it should be shared road with right of lane for buses during peak hours. After dark, pg forum will find a pleasant trip and fuel economy on highway and less global warming unless we cut down travel.

Home built not affordable?
They are not meant for locals, but those earn money from abroad lah!