For a long time, Bukit Mertajam was one of those places where time seemed to stand still and memories frozen in the past could be savoured in the present. 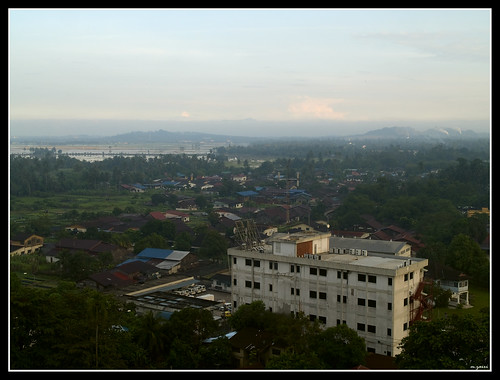 Tang Loon Kong took a stroll down memory lane in BM and reminisces about a carefree lifestyle, in a comment posted on the Penang Institute website not too long ago:

I had lived the first twelve years of my earthly existence in Bukit Mertajam (‘Dua Snuah Ka’ – Foot of the Big Mountain). My father was working for the postal services then.

The last time I went for a memorable steamy hot stroll, everything looked the same. I even went to my old classmate’s coffee shop at 5 Danby Street. He was not there. It was nice nevertheless because his sister-in-law remembered me – one of the twin brothers whose father worked for the Post Office .

There was also the Malayan Banking branch, as if it had stood still and frozen in time. Oh yes, the Mara shopping complex had been accompanying it for as long as I could remember. Memories of childhood rushed back. But there are no more mini MARA buses – these were the forerunners of KL’s mini buses. Maybe somebody got the idea from here.

I enjoyed my time. Things were very simple and straightforward. We lived in spanking new postal quarters at Jalan Muthupaliniapa. It was actually a huge condominium complex but in those days, nobody used that term. There were four apartments on the top floor – and a badminton court in the middle plus space for parties and barbecues. We had very friendly Malay and Indian neighbours. Somehow, within a span of two months, a festival would beckon. 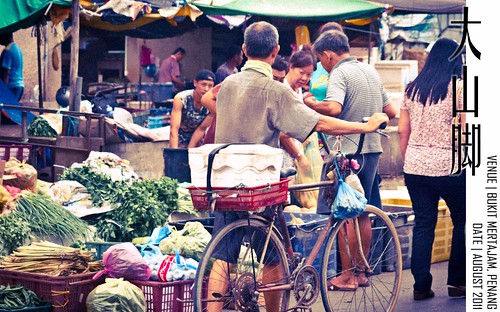 Food was aplenty for we were almost at the centre of town. The old market opposite the Bukit Mertajam Supermarket – or the memory of it makes me salivate. I usually went there for lian-chi-kang (lotus seed soup) and char hor fun. When there were Chinese ‘wayang’ shows in honour of the temple god (Tua Pek Kong), there would be stalls that sold delicious fish broth. And the fish they used were as tall [or maybe as long] as a man – giant marine catfish. I do not see this fish anymore in all the places that I have been too.

There there was this coffee shop near the main entrance of the Post Office. It sold roti chanai with maybe the best dhal potato curry. Customers got to see their roti chanai being made right from the fermented oily blobs of kneaded flour which had been rested overnight in large plastic pails. The coffee shop opened until late at night. Hungry? Just go downstairs.

See, it would cost a bomb to find this kind of apartment on Penang island or outside the island like in KL or Singapore for similar location advantages, and the experience.

Across the road was a petrol station. The forecourt was where bas kilang and ‘fish lorries’ jostled for space late at night or early in the morning. The bas kilang were from the Penang Textile Company – Pentex. I do not know if the company still exits. You did not need alarm clocks to wake you up in the morning: the buses and lorries would honk free of charge. Life was never dull.

Diagonally across the Post Office was the Bukit Mertajam District Court. Most of the time, I saw moonshiners standing trial. The incriminating evidence was the huge distillation vessels that were needed to produced toddy or other illicit alcohol – when the trials were on, the huge vessels were put in the court premises as prosecution evidence.

Nearly forty years have gone by, and I still vividly remember my primary school friends from Stowell National Type Primary School. The school sits on the long ridge of a hillock and the field covered the entire surface of the depression below the hillock. It was the size of two football fields plus a 400m running track. When heavy rain fell, the water would be ankle-deep, and the depression became a ‘water sports centre’ of sorts. 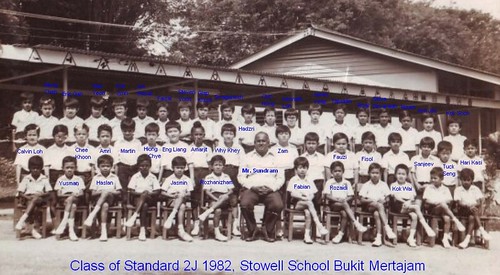 Maybe some oldies would remember that “some ‘Martians’ landed at there and zapped one of the students that had to go to hospital for treatment”. We had our own X-Files! It was reported in the newspapers. Why doesn’t somebody do a movie on that and sell it to Hollywood!

Going to Penang Island to meet my grandparents, uncles, aunties and cousins meant that I (of course accompanied by parents and brother) had to clamber onto the dark blue and yellow Kulim-Butterworth Express, which stopped at the Central Province Wellesley Bus Terminal just behind the Post Office. The red and yellow Central Province Wellesley Omnibus Company operated many routes from here.

In anybody was in a hurry, there was also a taxi-stand – five minutes walk away. The taxis served the entire country. There, I saw the devotion of the drivers/owners towards their tough-looking Mercedes Benz vehicles. It would have built confidence in their passengers. Safety was almost guaranteed. They just did not use Volkswagon, Toyotas, Datsuns, Hondas and what-not. Those taxi drivers knew their business.

Going to Kuala Lumpur was by Express Rakyat, which stopped at the train station only 15 minutes walk along Jalan Pegawai. Waiting passengers had the choice of a coffee shop or a small book store, from which I would occasionally buy my war comics (imported all the way from UK).

The steam trains were making their final appearances at the Bukit Mertajam train station. Which kid could resist the enveloping cloud of white steam coming from the train’s valves? For a few moments, that kid would be in a world of his own – remember Harry Potter?

Oh! The clang of the bronze bell held by the station master – Clang! Clang! Clang! and the train moved on to the next station. Before that, he would have already inserted and turned the huge key into the signalling box in his office to clear the way for the train. Long levers were pulled by his assistants to lay the train on the right tracks.

See, Penang has two airports. One at Bayan Lepas (The first international airport in British Malaya) and the other, at Butterworth. I had always wondered why the government did not turn part of the RAAF and RMAF base in Butterworth for civilian use…

Things were very simple in Province Wellesley or Seberang Perai (or Koay Gang) and it has been my privilege to enjoy the simplicity. Many on Penang Island would have missed it. Put the two together, we have a balance of expectations that very few places can offer under one province.

Share with us your memories of BM. Do you have old photographs of the town? If so, click ‘submit photos’ at the top of this page to send them to me and I will post them here.

Where are the Chinese cemetary in BM located? Is it Tanah Liat or Brapit?
There is a new and an old one.

Hi Anil, I didt know that you are from Stowell and BMHS. I was in Stowell in 1967 – 1970 and in BMHS in 1973 – 1977. In between I was posted to different schools around Malaysia. Anyone reading can post to me on my face book : Ignaswaran Kannusamy

Hi Ignas, I wasn’t in Stowell actually. Went to secondary school on the Island.

One thing which amazed me was that photo studios (photography shops) can be excellent repositories of history- in the form of photos of bygone days.

(e.g. the well-known Chan Chew photo studio in my hometown of Kuantan published a volume of photos of old Kuantan with commentary).

Yes, and I think we need more photo museums around the country depicting scenes of everyday street life.

Memories are priceless. Many like old 35mm films replaying at will. One can still smell them, hear them & even visualize them in the mind’s eyes. As if they were yesterday once more. One can even feel young one more time by going back, just one more time. The apartment I am staying now doesn’t give me that many vivid memories to cherish. Unlike the Ban Eng Hong coffee powder shop @ Macalister Road next to Kraven A where I was brought into existence & later the prewar house in Madras Lane. Maybe as a child, I had all the… Read more »

I am a BM Boy…stayed in my grandma house next to LLN at the end of Jalan Pegawai….lots and lots of fond memories…alas the house is no more now..The house land title was dated in year 1876!! Maybe one of the oldest house in BM town. Attended Stowell then BM High school. Year 1977 after only one term in BM high, I was transfered to SP to another glorious school Sek Men Ibrahim (IOBA FB). One thing which I cannot forget was the trains passing by BM station…you could tell the time by listening to it’s whaling siren. Arwah Pak… Read more »

Anil – interestingly Air Traffic Control in the Northern Region is still controlled from Mata Kuching Airport. There is another ATC further north call Lampu Director or something like that. In the 70s many went over to Mata Kuching to take the Boeing 707 flights if I am not mistaken. Going across to the mainland in the 60-70s was a big event for many especially if driving across on the ferry