While we lament the terrible congestion on the urban roads in the peninsula, spare a thought for motorists in Sarawak using this horribly muddy road from Miri to Marudi. 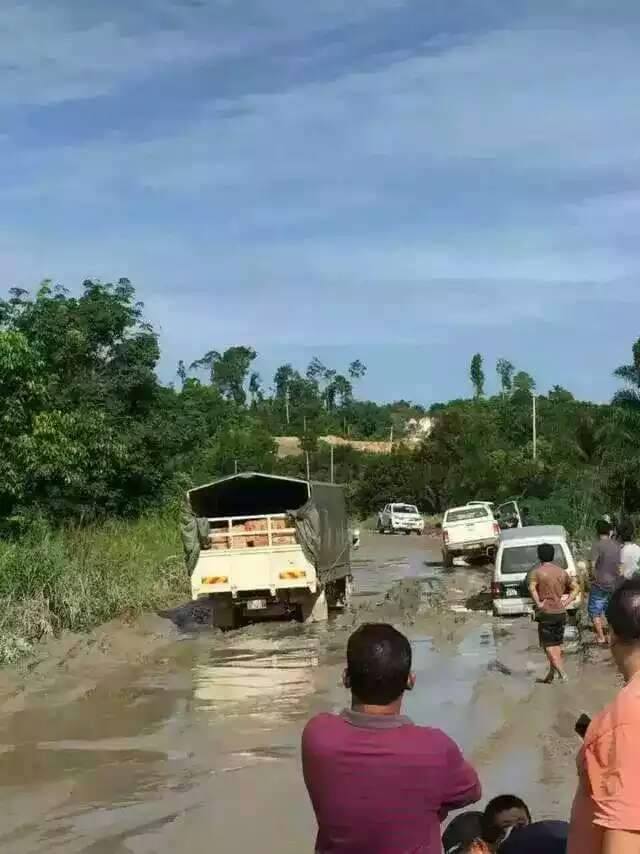 This slippery 43km road, riddled with potholes, was built only a few years ago.

The road used to be the path to a logging camp which has now been converted into an oil palm estate, according to Sarawak resident Daniel who alerted me.

It is near an area where (illegal?) logging and quarrying was carried out and native customary land was turned over for oil palm cultivation, he adds.

Now Sarawak state has announced the upgrading (repaving?) work by the concessionaire – guess who… why, the Taib Mahmud family company CMS, of course – at a cost of RM77m.

Mawan said the stretch of road, which was built under the Jiwa Murni programme, had been in a bad state due to heavy rain and overloading of heavy vehicles.

“We are not saying that the road is not good enough but the standard was not meant to cater for heavy vehicles,” he said.

Members of the Royal Malay Army Regiment were reportedly involved in the building of this road under the Jiwa Murni programme, and the road maintenance comes under the army until June 2016. Can someone enlighten me as to why the army has to be involved in road-building in Sarawak?

The road has enabled rural folk to sell their agricultural produce and fish at urban centres such as Miri. But the terrible condition of the road has caused much hardship and inconvenience.

It is interesting that the ‘upgrading’ of the road will cost more than the original allocation for the road.

Prime Minister Najib announced an allocation of RM60m to construct the road on 15 April 2011, on the eve of the Sarawak state election on 16 April. You help me, I help you?

Well, this is the road that the voters finally got. Janji ditepati!

Said another Sarawakian wryly, “It’s okay, they can complain. But when it comes to elections, they will still vote for BN.”

If you don’t think this is the worst road in Malaysia, send me a photo of a worse road to prove it…

What can the people expect from the Barisan Nasional?

Ah Jib is giving Pan-Borneo highway to Sarawkians, toll free!
Like that surely can get votes in the coming state election.

This Pan Borneo highway is highlighted daily on TV showing the transformasi of Najib, but rakyat are more interested to know ‘Mana 2.8 billion’!

Anil using one particular of trail and considered it as road. During raining season in Penang many have also encountered such conditions especially Sg Ara areas.

It is a RM60m road announced by PM.

I thought Najib announced a road in 2011? That was not a proper road? He only announced a ‘trail’?

Announcement in 2011 by a Naik Jeep for his own jeeping pleasure?
A trail for his name sake that takes you on a ‘slippery’ path to development!
Maybe a Trail 2 to be announced before GE14?
I have a premonition of Kota Raya 2 in the making.

Baru Bian spoke out in November about another rural road in Sarawak – from Long Semadoh to Ba’Kelalan – which is also in very bad shape.

Malaysiakini’s report on this is available at:

Compared to the Miri-Marudi… I don’t know which road is worse, but suffice to say, both are atrociously terrible. And it is certain that the BN-held state government has not been delivering to our Sarawakian even a basic standrad of infrastructure. What happened to the revenue from the state’s oil, timber and other resouces?

The marudi constituency is held by BN sylvestri munan AK Entri I guess. Rumours has it that he is a convert to Muslim and (if so) one wonders why he is not using his Muslim name. Always see him in airport and guess he must be a very busy man. The people of marudi must make their dissatisfaction heard.

This is what Sarawakians get by providing Fixed Deposit to 1PM?

The “red dust” bauxite mining road to Kuantan Port is a
close competitor.

Call this a road? I would classify it as an off-road trail – on rainy days, it is full of mud, slippery surface & unpredictable tyre spinning / on dry & hot days, it is baked hard, the ride is as rocky as an Angkatan Tentera tank & the air dusty from the spinning of truck tyres. We in Peninsular Malaysia have been enjoying tarred roads as standard roads for decades. But in East Malaysia, many so-called roads in the rural & mountainous areas are still primitive trail roads which also explain why there are so many 4WD vehicles. Sabah… Read more »