We shouldn’t be surprised at the RM20m ‘bridge to nowhere’ in Sarawak, as revealed in the Auditor-General’s report. We have seen it happen before – in Putrajaya of all places. 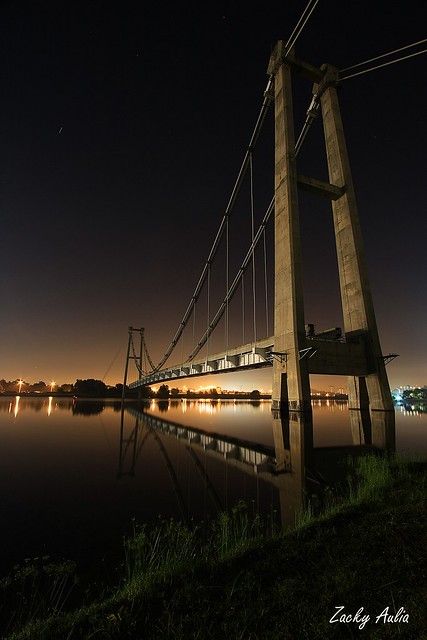 Perhaps it is time for a guided tour of unfinished, useless and redundant projects in the country? It could be a major attraction for photography buffs as the above picture illustrates. Several people selected that photo for a Flickr Award!

And this one as well: 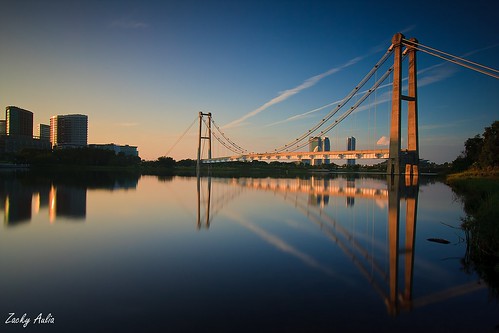 Maybe in a hundred years, people will think we have some stunning ruins.

In case you are wondering, that bridge is from the incomplete Putrajaya monorail project. The “suspended suspension bridge”, as someone put it! Read this Star report for some background:

The elevated track was 90% complete when the project stalled in 2004 because the Government had not approved further funding.

MTrans Monorail Sdn Bhd (MTrans) was appointed to finish the project within 30 months. The plan was to have two monorail lines with a total length of 20km, divided into 13.2km for Line 1 and 6.8km for Line 2. 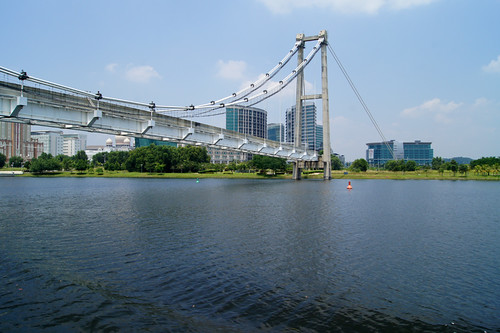 But, whoa, you folks have found more bridges to nowhere! Click on the links in the comments below to see more wonders of Malaysia.

“Maybe in a hundred years, people will think we have some stunning ruins.”
Whoa…i just luv this projection…

Sounds like you did not to this topic justice. I knew about the Terengganu bridges but not the other ones.

A RM 0.5 billion interchange at Banting, Selangor was announced a few years ago. In a low-density area like Banting, you could always design the intersections of highways in a cheaper way – only 2 roads meeting at any point. I have seen a flyover to nowhere at a remote village area in Bangi. Thanks to “business-friendly” arrangements, many new roads are motorist traps; the signs are deliberately misleading, vague, poorly positioned or blocked to lead you on to the next toll. If you are stubborn and refuse to use the new “facility”, your old road will be flooded with… Read more »

Anil, along Jalan Kuching in Kuala Lumpur the motorists can take a flyover route to Jalan Raja Laut. Along this flyover is another offshoot that was supposed to allow the motorists to access a condo project next to the Sunway Mall in Putra Place. However, this overhead bridge remains uncompleted until today. It was constructed during Datuk Elyas Omar’s era, I believe. It’s an eyesore and has been a bridge to nowhere for decades now. I hope my info is still current.

Thanks for the info.

Readers, try and locate photos online of all these unfinished bridges and post the links in the comments here as a testimony to the sheer waste of public funds, while certain cronies end up rich.

AG Report has unearthed lots of wastage of public fund. Repair cost of equipment is many times the actual cost of brand new equipment. However these irresponsible (corrupted?) civil servants are never reprimanded, and continue to get bonus and increment as BN has promised that iron rice bowl in its ‘I tolong you, you tolong I’ contract.

That’s why we need ubah to effect a real change and transformation. Otherwise the fate of Greece is awaiting us!

Just wanted to add….there is also a RM 210 M bridge in Terengganu which is build over dry land.

Apparently , that section of the Jabor -Kuala Terengganu highway alignment was amended after the highway construction started, so that the river crossing was no longer required..

They proceeded to build the bridge anyway..on dry land, just spend the money so that someone can continue to make his “margin” I suppose.

A 2KM-LONG bridge in Kedah linking Yan to the uninhabited Pulau Bunting became a white elephant after a project to build a power plant on the tiny island failed to take off.

Anil,it was in the local news not too long ago, showing school going children crossing a swift flowing river after heavy rain, by walking on a hanging bridge, which only had one hand rail left. The other rail had snapped off at one end, and the foot path was hanging down. and the children risked their lives, by hanging on the top rail while stepping on the rope below.
Do you think you can add that picture for comparison?
Thank you.

Could you let me know which river this is or which state?

It bears recalling that the lakes in Putrajaya, nice though they be, were man-made in the first place. So those many bridges were solutions to a problem which had been purposely created. And not only that, they were ornate and grandiose to the extreme. [Just like most of the streetlights in the same place] So the amount of the rakyat’s money which went into that nauseating money pit while there are still not enough healthcare facilities and schools for so many of our fellow Malaysians in rural areas, and so many still languish below the poverty line. Another typical Project… Read more »

It’s like the dams in Sarawak. Build the dams, then have excess electricity and then try and figure out what to do with all that extra electricity. Unfortunately, the ‘solution’ – energy-intensive aluminium smelters – creates even more problems.

the mythbuster
Reply to  Anil Netto

That only goes to show how ingenious our politicians are at providing solutions to problems they create in order to create more and more wealth for themselves.