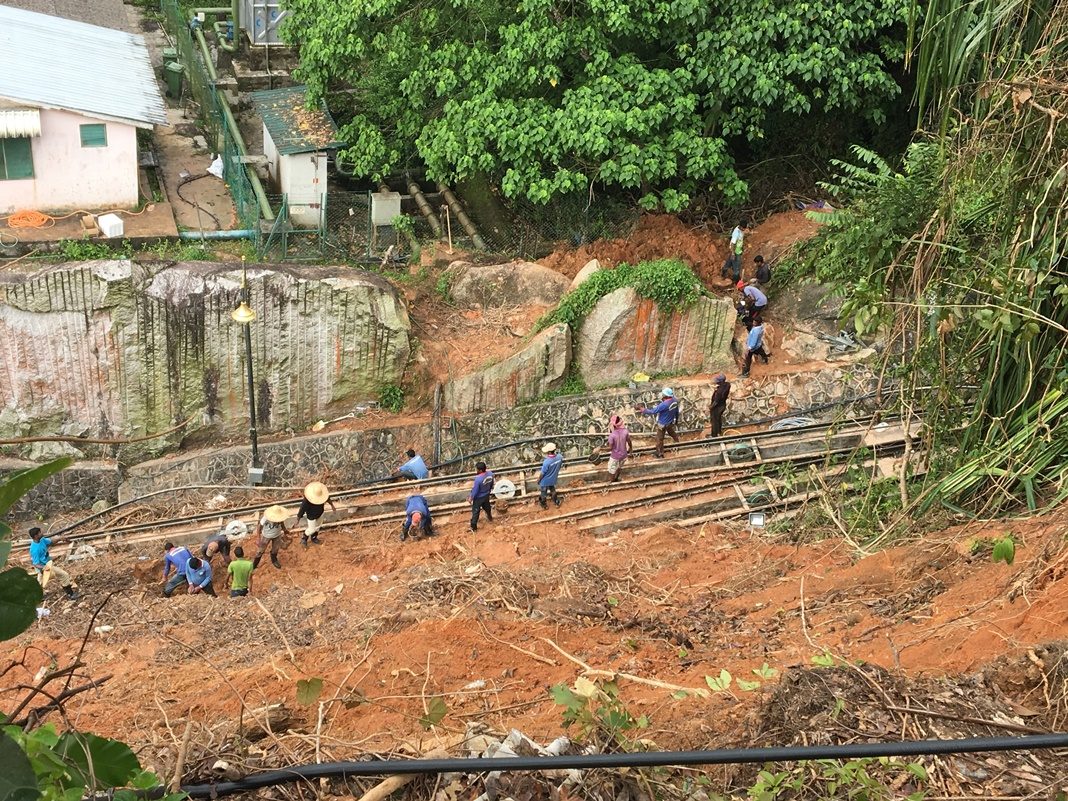 Here are a few images you may not have seen. These photos, taken about a week ago by a concerned Penangite, give us an idea of the extent of the problems facing the Penang Hills Railway, which was knocked out following the rainstorm on 4-5 November.

(Incidentally, a minor landslide also occurred in the same area near Middle Station on 29 September 2017, following heavy rainfall in mid-September 2017. The hill railway was then briefly suspended.) 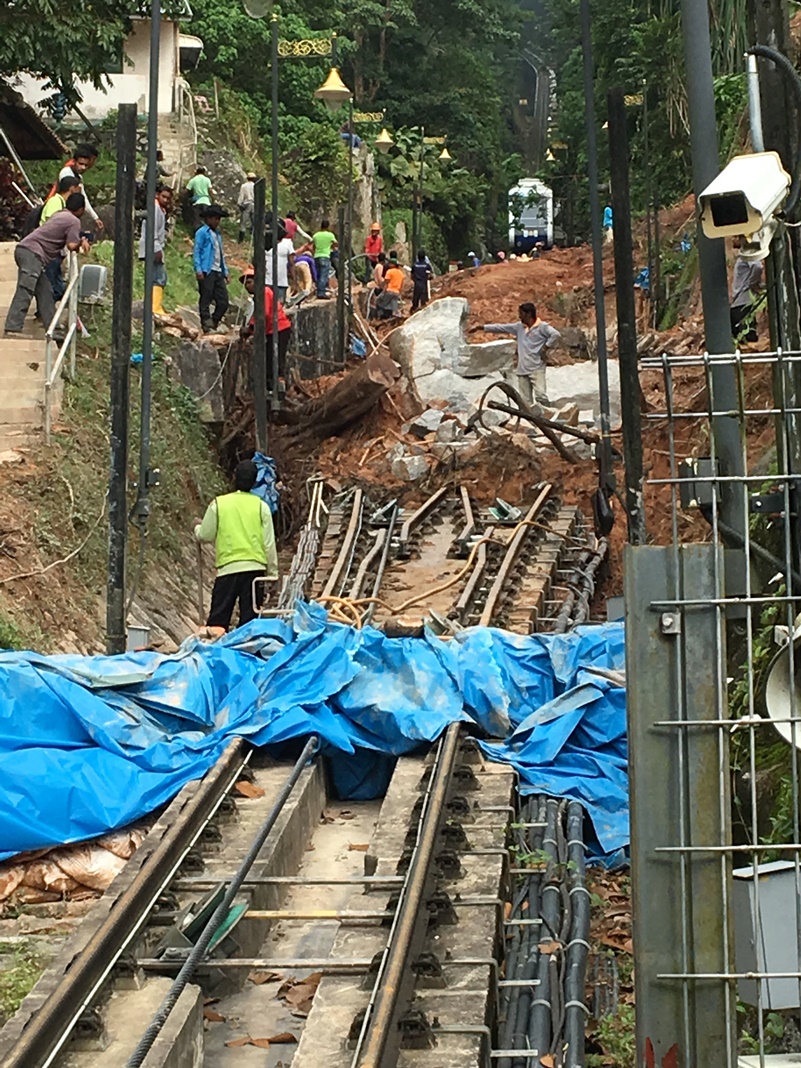 Mounds of earth have fallen on the track near the Middle Station. You can also see a large boulder which may have damaged the track or the hauling cable.. 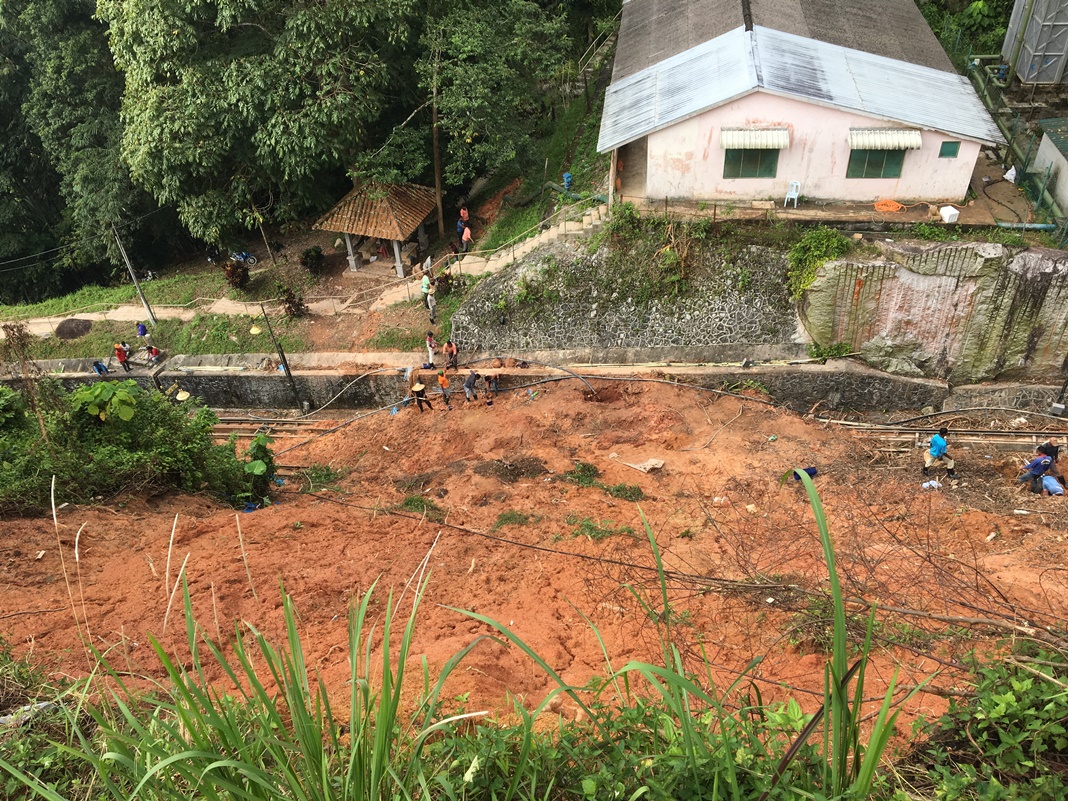 Middle Station was bypassed following a controversial plan to ‘upgrade’ the railway in 2011. The affected track is at the new passing place just above Middle Station. Is this the area that was widened during the ‘upgrading’ work?

It will take a while to clear the track of all that earth. And that’s the easy bit. After that it will take much time and effort to stabilise the hill slope before the railway can be used. 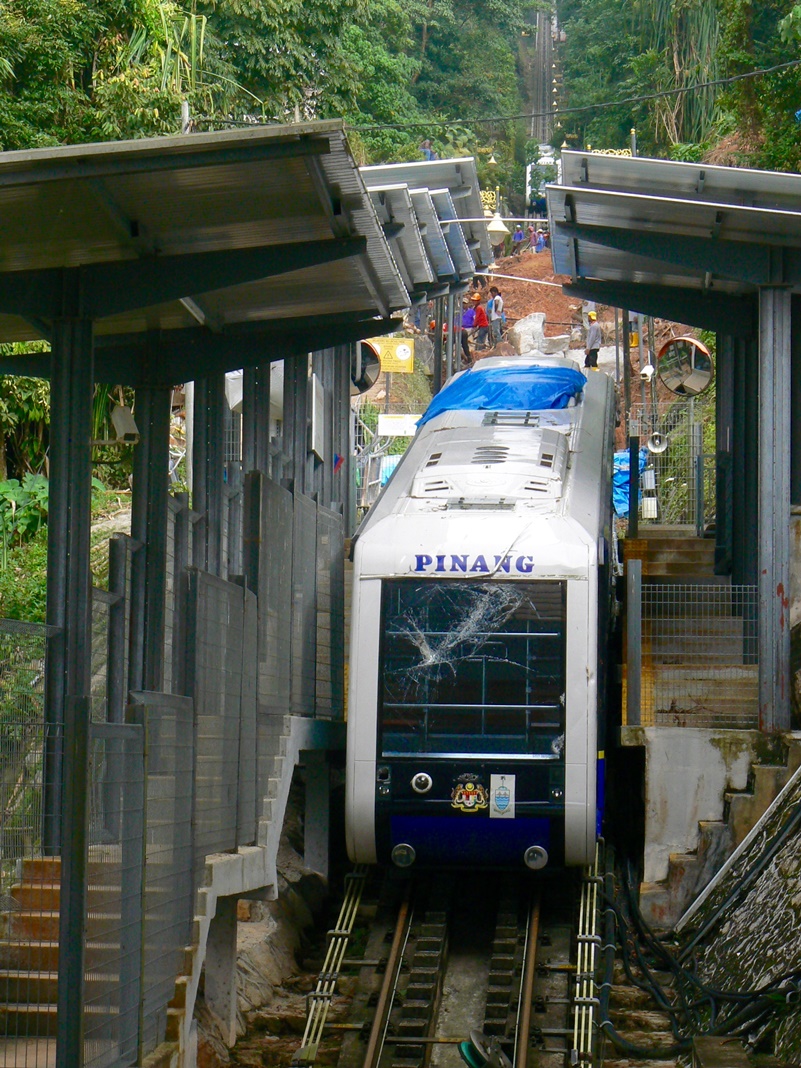 The photos also show the two trains that are stuck in the area. Notice the blue tarpaulin sheet on the roof of one of the coaches. What is this covering? Look at the shattered glass pane. How did the windscreen crack? It was reported that one train’s windscreen was damaged due to a fallen tree branch.

We should be thankful that the landslide did not land right smack on the trains, or the consequences do not bear thinking about. 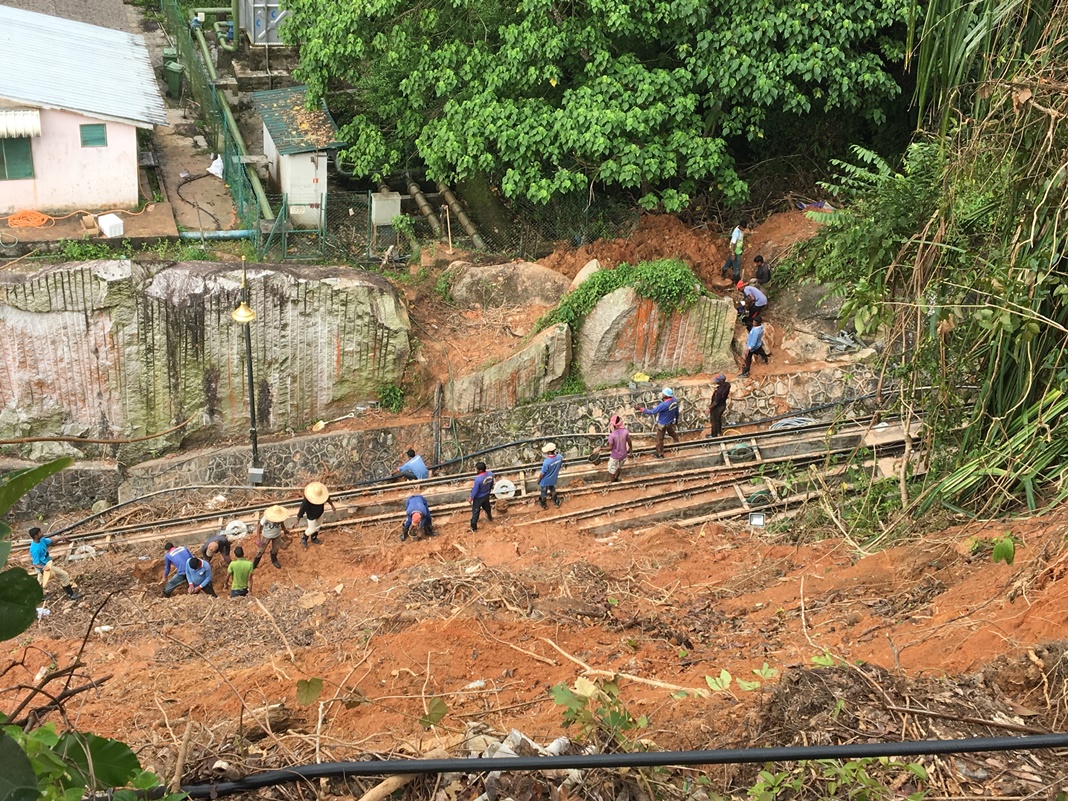 As for the workers, they don’t have hard hats and don’t appear to be wearing industrial boots which offer better protection. Is it safe for them to work like that near an unstable slope? In the wake of the fatal landslide in Tanjung Bungah, no effort should be spared to ensure workers’ safety.

The work to repair the tracks and the coach and stabilise the hill slopes must be done carefully and meticulously. Then, we need independent experts, including the Swiss coach makers, to inspect the work and certify the safety of the tracks, the slopes and the coaches before the railway can resume operation.

Not something to be rushed, even if it is the holiday season right up to the Lunar New Year.

Check out the landslides along the farmers’ trails in the area as well. 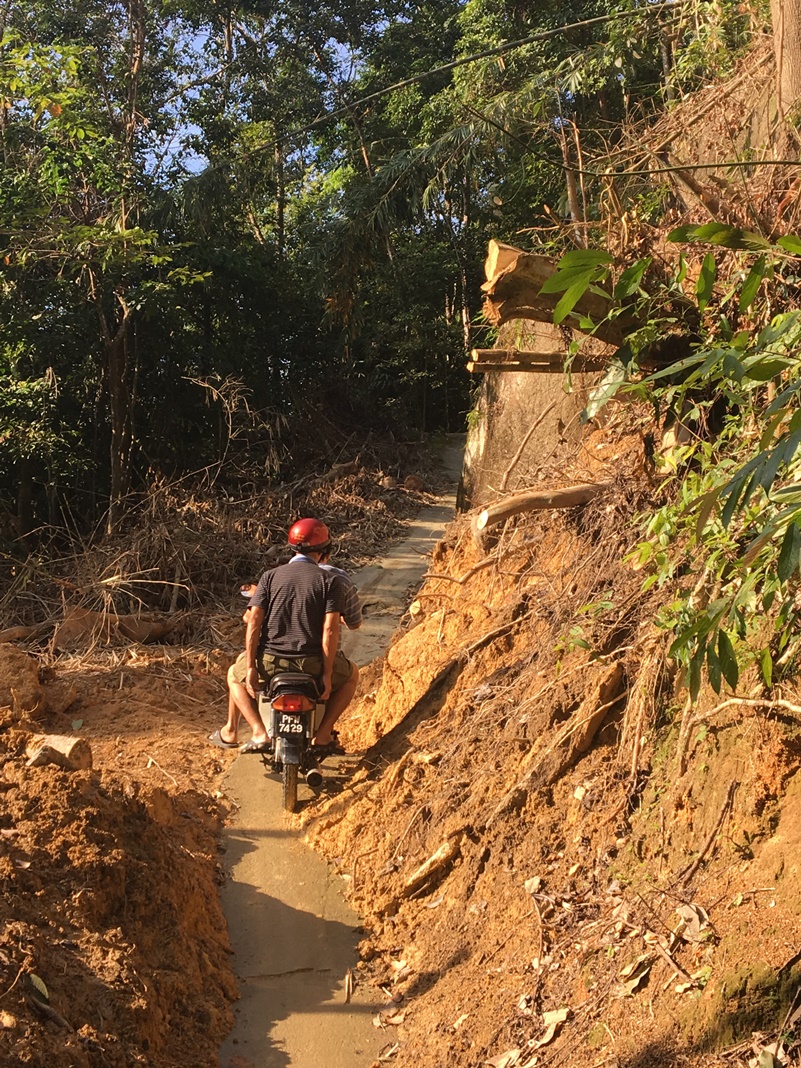 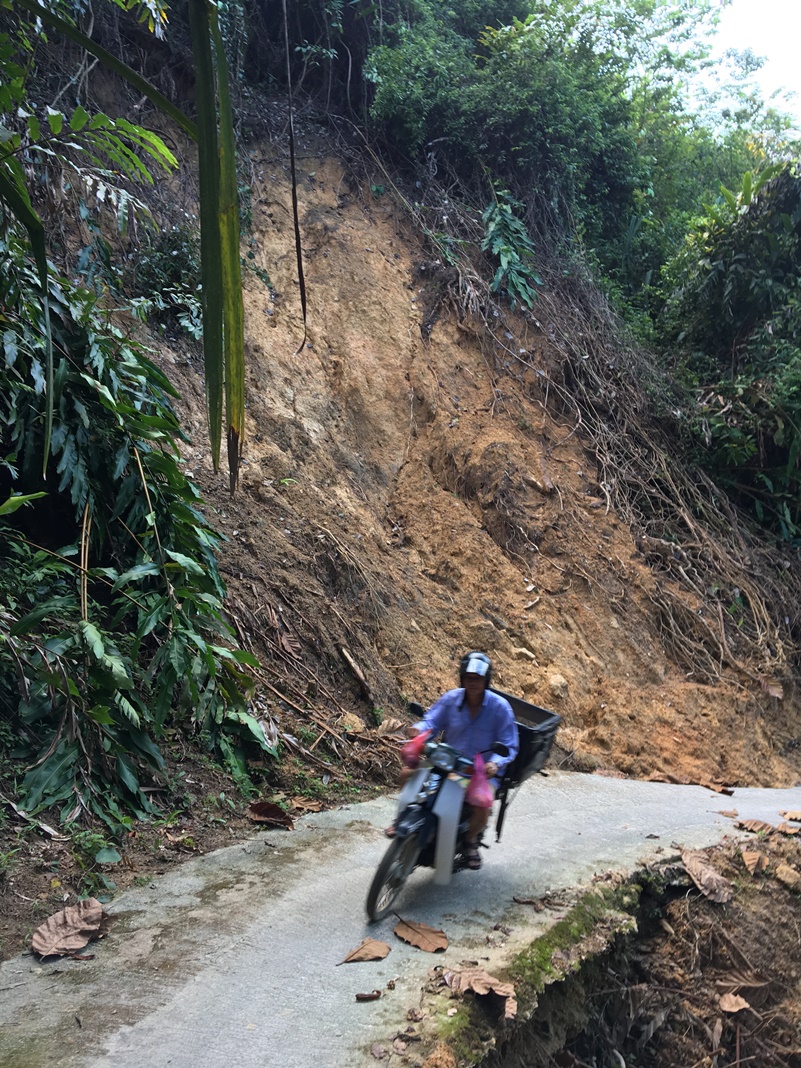 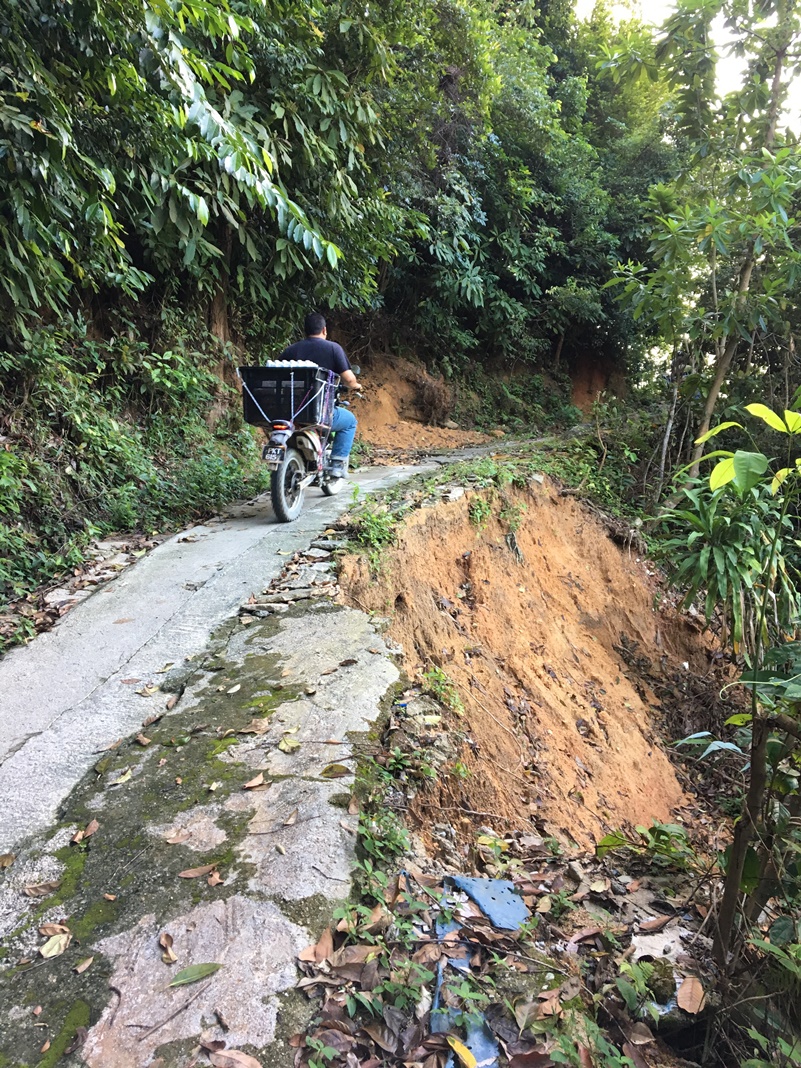 This boulder is perched precariously at the top of a slope: 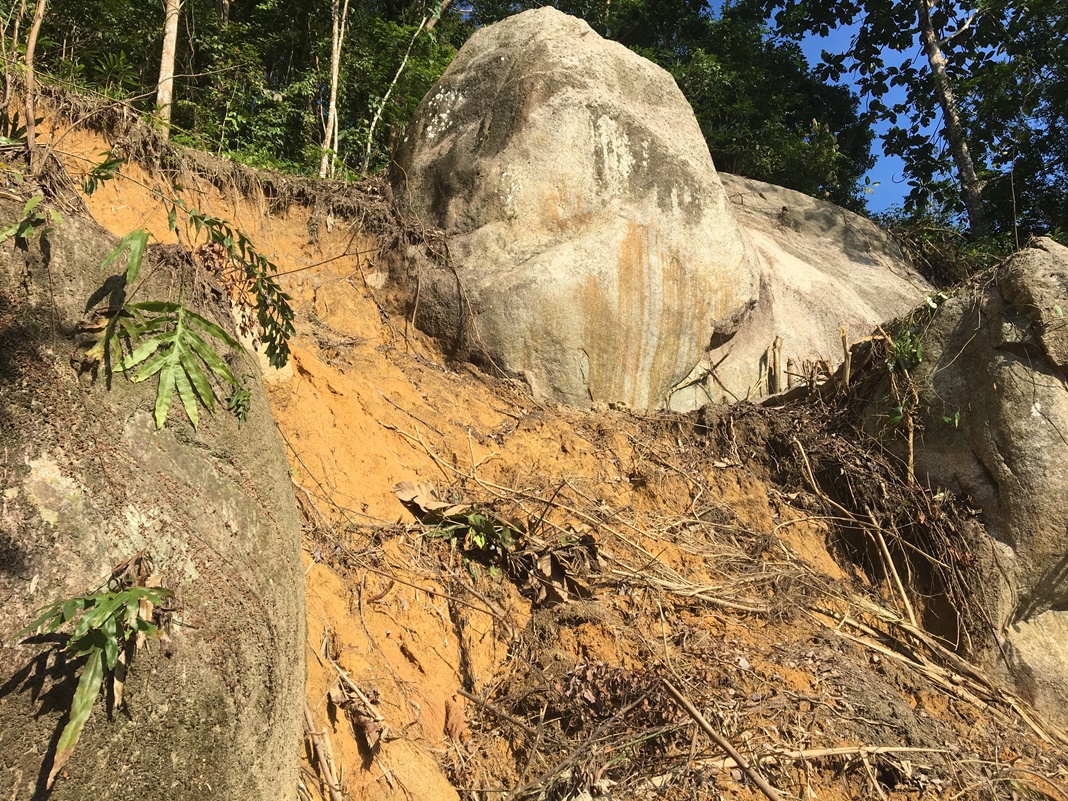 Penang Hills Railways had been plagued by other problems following the corporatisation of the railway, mainly pricey fares, the difference between local and foreign fares (not all non-Malaysians are rich!), and overcrowding (as this blog previously reported), testing the carrying capacity of the hill to the limit provided under the Penang Hill Local Plan.

One visitor to Penang, Serge Elias Grynkewich wrote on a Facebook page in June: “Perhaps it was because of the school holiday, but I found the train to be overcrowded to the point of being annoying and uncomfortable. Also, being penalised with a very high fare because I am not a Malaysian was irksome. I used this railway a few years back and found it more foreigner-friendly and less bureaucratic. Too bad things changed.”

Lamented another visitor, Rachel Liddell: “This service is ridiculous. Unless you want to pay more for the fast lane don’t bother. It’s not even worth it once you get up there. Sure it’s a nice view but I’m sure you can drive up the hill and not pay a stupid amount and wait in a ridiculous line in Malaysia’s heat. They won’t even refund you your ticket of you decide not to go.”

Let us look at the beautiful side of Penang Hill:

Updated for tourists to Penang:

The service had been temporarily halted after the November 4-5 storms damaged the train track, scuppering services for the traditionally busy year-end holiday crowd.

This is the price we have to pay for a troublesome / landslide + rock fall prone hill railway upgrade over a proven one. This is the price we have to shoulder for an agreeable CM who gleefully accepted the ‘golden key’ to this upgraded system from then Tourism Minister Yenny Yen Yen. This is the financial returns (of no income due to frequent disruptions) for many businesses at the hill top including The Habitat, hotel, restaurants, bungalow rentals & stall operators. This was not the case in the past before the controversial hush-hush upgrading to Speedy Gonzales Fridge Train… Read more »

Lots of complain. Like that tourists also scared to come Penang.

Many domestic tourists coming to island now holiday season. Cannot go up the hill they will hunt for street food to drive the food prices upwards.

To you these are complaints, but to us these are our legitimate show of concerns. Otherwise, Penang Hill Watch would not have existed in the first place to protect our our asset from massive bastardisation by irresponsible… Without complaints as what you prefer to call them, you may not enjoy Penang Hill for what it is famous for though not fully as before. Well, maybe Penang #1Deity doesn’t like it (complaints), so sama-sama! It is better to show concerns than to regret from Komtar Tower if a major calamity should happen (touch wood) @ Penang Hill Railway involving innocent lives… Read more »

A few reasons not to do that.

1. It’s a heritage hill
2. People rely on that hill to put food on the table
3. People still live on that hill

Domestic tourists come to Penang cannot go up hill, go eat street food and drive up the prices? OMG you people can really think of every excuse and every reason for everything! Better shut off the whole Penang from everything. What is the point of this article? They are hiding these pictures because this landslide happened due to development? Most landslides occur naturally even at places without inhabitants. And this happened during a big storm. The train glass broken because it was smashed by a falling tree also you want to question? The blue plastic covering the damage on the… Read more »

More tourists come but cannot go up the Pg Hill & food prices everywhere suddenly go up???
What a … reasoning.
Then for every Speedy Gonzales Fridge Train freezing episode, Pg hawker food will go up??? What a scaring… tactic!
The point of this article is to highlight the dangerous pattern of Pg Hill Railway development since the upgrading of the railway system from a proven one that didn’t even freeze at the barking of hill dogs. Still don’t get it, go drink Sg Pinang Black Tea.
Sudah hampir runtuh merata tempat, masih renung semua AOK!!!

The rainfall and wind orso upgraded. Ah pek never saw a over 300mm rainfall Within few hours and ferry is like main mask thrown about

Why pg Hill in the first place? Better close down pg Hill. No Hill cutting, no funicular and everything is so peaceful. One buy car or computer expect to pay for upgrade and maintenance. Like pg airport, move it far to alor setar. Less tourist, investors and singland will come and sapul.

Penang Hill is classified as Red zone area after Nov 4. Public and hiker should refrain from hiking up due to safety reason. The slope and trails are still dangerous to public. station and track is out of bound area, anyone accessing that are can be prosecuted. there were 36 stranded up on the mountain on Nov 5 and was rescued by helicopter due to damage and dangerous hiking track, and we have now more stubborn people ignore their own safety decided to make their own trip to hill. we don’t need another helicopter rescue, or any casualty or injury.… Read more »

If it is a red zone area, why are the workers not wearing protective gear?

Spin, spin, spin! What else?

My sixth sense shown me 2 mental visions of terrible calamities – a recent vision of Bukit Kukus landslide at the present Mother of all hill cuttings in Penang Island (opposite Majestic Heights) The other one some years back (not so clear like Daylight 3D) is the Penang Hill Railway which I would not want to go into details. Hope I am not right & my visions are mere phobic imaginations. Not even a deja vu. But then, the recent unbelievable flooding like a river in front of my condo service road was a deja vu from a recurring nightmare… Read more »

Ah pek have a won Di full view living in a condo. Others are not allow to live in highrise and hence no won Di full view. More highrise, ah pek’s view will be blocked and obscure.

Too many condo around your condo? So no view? Go back to Apple for better view?