… most people in KL and Penang are unaware of the new service or the train schedules and fares.

The new electric trains, which cruise at around 110-140km/hr on the Butterworth to KL route, give commuters a real alternative to their cars, express buses or budget airlines.

The pleasant journey takes less than four hours and costs RM59 each way. This is comparable to an express bus, but the train wins out as there’s no possibility of a traffic jam and it is a lot safer.

The trains have a buffet car serving coffee and malted drinks, sandwiches, and packed fried rice/noodles. They also have restrooms on board. (But KTM should have a contingency plan in case any of the flushes malfuntion, as it did during one of my three trips. It creates queues at the other restrooms.)

The Butterworth-KL sector is part of a longer Padang Besar to Gemas route.

The train leaves Butterworth, heading south to Ipoh anf KL at 7.00am and 5.58pm daily.

From KL Sentral, the electric trains head northwards to Butterworth at 9.30am and 6.35pm.

Unfortunately, these times cannot easily be found on the KTM website. Go on, have a look at the KTM website and see if you can find the schedule easily.

This must be KTM’s best kept secret. It is almost as if KTM is discouraging people from finding out the actually times of this key sector! I have lost track of the number of people asking me for the times and the fares.

After much browsing, I finally found the train schedule, so I will do KTM a favour and reproduce it here. Enjoy. 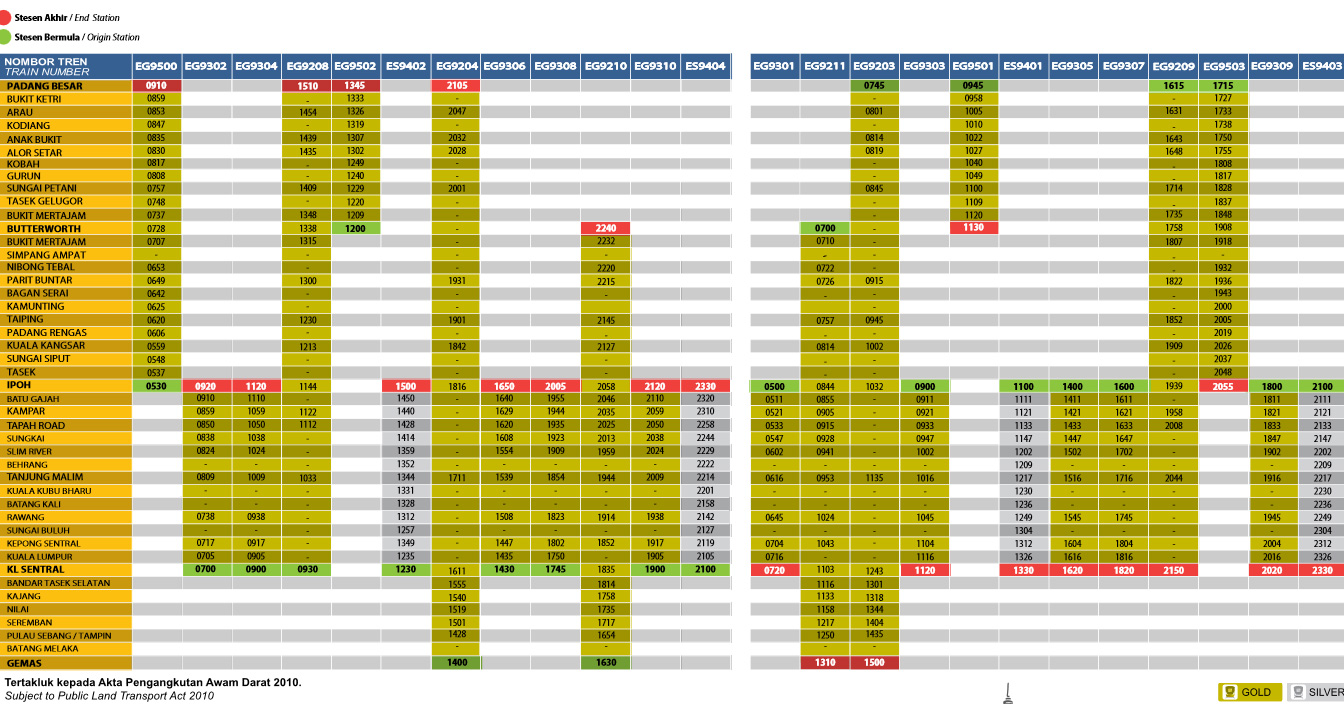 You can find the train fares here.

Even without the publicity, the trains are usually full, and tickets have to be booked well in advance. I chatted with a makcik, after helping her place her bags in the overhead compartment. A retired bank employee, she spoke excellent English and raved about how convenient the new service in the north was. She had hopped on the train in Taiping and was on her way to see her youngest son and his family, who would be waiting for her in Butterworth.

You have to book a few days in advance if you want to get your preferred dates and times.

You can buy your ticket at KL Sentral on the left side once you enter the front entrance. In Penang, you can book your ticket at the Butterworth railway station or in George Town, just outside the ferry terminal near the row of stalls, in between the two large Rapid Penang bus terminals.

You can also buy your ticket online via the KTM website.

KTM can easily triple the frequency from two to six trips a day. I believe they will be moving in that direction with more locomotives due to arrive next year. Before long, there could be a train running every couple of hours, which would be brilliant.

With enough publicity, I am sure the trains will be heavily patronised. As the trains are already full most of the time and while waiting for new locomotives to arrive, maybe KTM feels it doesn’t need the extra publicity just yet.

This service should have been launched in the 1980s – but back then Mahathir was obsessed with Proton and money-spinning tolled highways, and the train services were neglected and stuck in a time warp – until now.

Let’s hope the removal of subsidies for train services next year won’t affect the fares for the electric trains, which are more friendly to the environment in these days of climate change. By right, train services should be subsidised as this mode of public transport is a good way of unclogging our highways and roads.

If KTM can introduce an inter-city train service with minimum stops using these electric trains, then Butterworth to KL in three and a half hours is certainly possible. That is plenty fast enough for now.

Under no circumstances should KTM now be privatised to some crony. If managed right, this electric train service could be a lucrative source of revenue for KTM.

So ditch your cars for inter-city travel and save on petrol and highway tolls. Catch the train, beat the traffic jams and arrive at your destination fresh and relaxed.

‘This service should have been launched in the 1980s – but back then Mahathir was obsessed with Proton and money-spinning tolled highways, and the train services were neglected and stuck in a time warp – until now.’ The first electrified train services between seremban KL was launch in late 80s. Then the service extend to batu cave and klang. The double rail electrified project from JB to Padang besar was launch by Mahathir. But later a sleepy PM scrap the project. Then the next person who took over only restart the projek from KL to padang besar portion only. Otherwise… Read more »

Mahathir was in power for 22 years. Surely, it doesnt take more than 22 years to put in place electric trains and tracks from north to south.

More lip service to the global concern for public transportation, while protecting cars, tolls and petrol. First, existing, adequate systems are destroyed through neglect. The option then selected is often expensive in commitments to suppliers, so-called entrprenueurs and financeers.

The problem with Malaysia is transportation is planned and executed piece meal.
There should be a holistic master plan (buses, trains, taxis, highways).

The electric train is interesting but most islanders may not use it as there is no convenient feeder transport to it. As one person rightly said, the cost and time spent will be higher. As an islander, I prefer to tale the express bus which leaves from QB.

Eventually the electric train will die because of not enough people use it.

You have a point there about the need for feeder services, perhaps a cross channel rail service.

I dont think the train service will die out in the near future as it is fast and comfortable and already well patronised.

I was wondering why no one thought of adding 2 railway tracks to either of the 2 bridges. I would have thought that the Tourism Minister would have been over the moon about this!

Yes, precisely. The track northwards could have branched out across the 1st or 2nd bridge and run alongside the Jelutong Expressway all the way to the ferry terminal in George Town.

KTM is like MAS, badly managed and failed to market its services effectively, possibly due to senang diri mentality and no accountability for failures.

As a KL resident wishing to go up to George Town on business, I calculated it actually works out about 30% more expensive to travel by train to Buttrworth the evening before to be on time for a meeting the next day. The expensive hotel tariffs and the cut-throat un-metered taxi rates to get about George Town on time are the added cost factors. Not counting the time wasting with regards the ferry crossing and having to check into a hotel and spending an unnecessary night in Penang. The RM59 train fare therefore becomes much too expensive. RM40 is a… Read more »

I agree with the point that public transport fares should be kept as low as possible, and if possible subsidised to promote more environmentally friendly transport modes and reduce the cost burden of owning a car.

What is holding back the double track missing link between Gemas and JB?

You realize that the better this service is, the more EXPENSIVE Penang property is going to be and get more exclusive – one of your pet peeve?

Agree with james k on that the 7am train from Butterworth to KL is rather too early for the Penang island folks, especially for those who rely on public transport. Rapid Penang is quite reliable but not too sure about the ferry. I have written to KTM.

KTM can think out of box to promote train services.

Now Indian Superstar Rajaniknth in Malaysia shooting blockbuster “Kabali”. If only KTM can engage him to have some movie scenes with KTM trains then there will so much publicity to global audience !

On 2nd thought, may be the production team of Kabali uses Malaysia as backdrop due to the synergy of Malaysia associated with 1mobster$ ???

Malaysia has ready Indian gangsters to act in Kabali. That is the reality that the Indian producer is looking for.

KTM still no paradigm shift in management or marketing approach after all these years ! Transformasi under Pemandu not overseeing KTM’s lacklustre revamp in making trains appealing alternatives !

Anil can be a good spokeperson to promote train over private transport if only KTM is willing to operate out-of-box thinking !

I was at the KTM office at Penang jetty of the island side. Still very inefficient, hard to read time schedules posted and very out-dated way of operation !

Fares for trains ,MRT and Monorail must be cheap in order to attract more riders/users. As almost all riders and users do have to fork out additional money to finally reach home/office from the station. It make sense for the government to highly sponsor rail services. (provided we have a logic sensible thinking govt.) Public transport should not be profit driven but just to reach break even . Another issue is flood prevention engineering .Too many times the tracks are flooded. Another issue is security . In China, i notices that their train have at least 1 police officer patrolling… Read more »

The current times are useless for business meetings for people coming from KL. Departure from KL Sentral at 9.30am means the train would arrive at Butterworth just before 2pm, and there would be additional time taken to get to George Town. By the time one arrives at one’s destination in George Town, the working day would almost be over! KTM should offer commuters a real choice by having an earlier train, say 7.30M.

Good point. The morning train from bworth is at 7.00.

But 9.30am from KL avoids the jams going into Sentral. Perhaps the alternative is to take the 6.35pm train from KL the day before.

KTM is not giving a good alternative to car or air travel for business commuters. Many of the people who travel to George Town on business want to leave on the same day itself to save time and the cost of checking into a hotel in George Town or Butterworth. Hotel tariffs in Penang are very high as a whole, certainly mid-range hotels are more expensive compared to those in KL.

Well, I have heard that the frequency of trains will be increased in the coming year as more locomotives are delivered. I hope so!

But why such early and late departures? Inconvenient for those staying on island.

Agreed, they need to increase frequency.
Perhaps the profits of low-cost airlines and national airline are of higher priority??

I hear they are having an additional train tomorrow from Butterworth to KL at 7.00pm because the usual 5.58pm train is already full.

rapid train is better than budget airlines. look at how many hours required before boarding the plane and the security checks. to get cheap one has to book far ahead