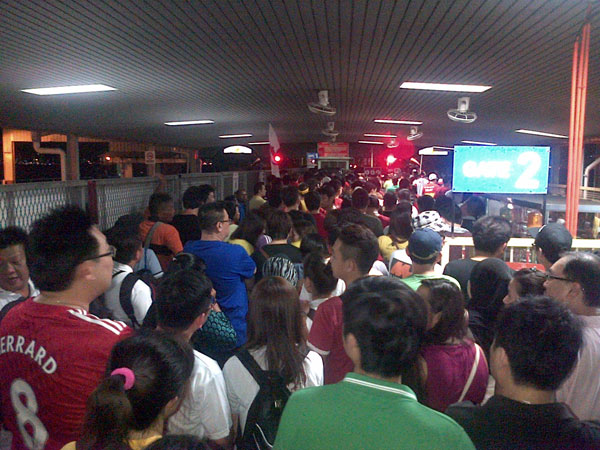 The ferry dis-service in Penang is ridiculous! Penang Forum has just released this urgent statement:

The Penang Forum Steering Committee is heartened that the federally controlled Penang Port Commission has requested the privatised Penang Port Sdn Bhd to postpone the plan to reduce the ferry service that was scheduled to take effect on 1 January 2016.

Only four ferries are in service now compared to a dozen ferries in the 1970s and 1980s. Even this skeleton service was due to be slashed, leaving just three ferries and shorter hours of operation – only for the move to be deferred.

We wonder why the port operations (including the ferry service) were privatised to PPSB in the first place when the Penang state government was keen on running the port.

In the past, the overall port operations were used to cross-subsidise the ferry service or handle any small losses that may have arisen from operating the ferries.

But PPSB, it would appear, is only interested in making profits from the port operations after the privatisation. It reportedly just announced that 2015 was a fairly good year as it handled around 1.3 million TEUs, a four per cent increase from last year.

So there is no reason why PPSB cannot subsidise any small losses (about RM20m) arising from the ferry service, especially given that fuel prices have dropped in recent years.

In this regard, why does the PPSB have its Annual Reports only up to 2012 on its website penangport.com.my? What about the reports for 2013 and 2014?

For the financial year ending 31 December 2011, PPSB broke even with a profit before tax of RM0.2m.

In 2012, the last year the PPSB Annual Report was published on its website, the port posted a loss before tax of RM16.0m.

For 2015, given the 4 per cent rise in volume, PPSB should break even or make a small profit even after loan servicing and after absorbing any losses from the ferry service. So why the need to slash the ferry service, which is an important public service relied upon by many? After all, a RM20m loss from ferry operations is not significant, given that it is a public service and can be easily absorbed.

Instead, PPSB appears to be doing all it can to discourage commuters from using the ferries. Its demoralised staff regularly warn motorists that they are in for a long wait – and many of these motorists then make a U-turn and take a longer drive to the Penang Bridge. Signboards warning commuters of the long wait were even placed outside the mainland ferry terminal recently. Queues of cars have been allowed to snake out beyond the ferry premises to further deter motorists from using the ferries even though there is ample space for cars to queue up inside the premises. Even the cruising speed of the ferries now appears slower.

What is stopping the federal government from handing over Penang port (including the ferries) to the Penang state government, along with the 30 water taxi licences that the latter has requested?

Why should the privatised PPSB be allowed to keep the potentially lucrative port operations while neglecting and worse, scaling down, the loss-making ferry service, which may now be hived off to the state government? Isn’t that cherry-picking i.e. the privatisation of profits and the socialisation of losses? If PPSB cannot operate a decent ferry service, then the entire port operations should be handed over to the Penang state government.

In the meantime, the privatisation concession agreement between the federal authorities and PPSB should be made public. We would be interested to see if there is any clause in the agreement that obliges the PPSB to provide a satisfactory ferry service for long-suffering commuters. If so, the present unsatisfactory service would be in breach of that clause.

If there is such a clause and if PPSB is in breach of it, shouldn’t the agreement for the privatisation of the port be declared null and void?

Hand over Penang port (including the ferry service) to the state government.

PPSB should maintain the present ferry terminal strictly for vehicles only and operate fast air-conditioned passenger ferries from the cruise terminal to Butterworth Sentral.
Currently passengers are treated like animals ushered into the “animal pen” on the upper floor of the ferry, surrounded both sides by cars, and the long walk on both sides of the terminals are uncaring to the handicapped and elderly.

That said, at the mainland terminal, there are dedicated vans to transport the disabled and senior citizens from the top floor to the bus terminal nearby. But I get your drift about the passengers being herded into pens on the upper deck of the ferries!

Sorry Anil – this proposal makes zero business and common sense. The ferry service is not profitable whichever way you look at it. The only way to keep the service is to keep subsidizing the losses. And turning the service over to the state will only make things worse. Although been running the state for almost 8 years, the CAT govt yet to show it can operate more efficiently or cost effectively. So I don’t see how the state govt can improve the situation for commuters. I believe LGE is eyeing the ferry service for a bigger pie – the… Read more »

Yes, if the service cannot break even, it deserves to be subsidised either from port profits or bridge toll revenue.

BN’s priority is on the KL-Singapore high speed rail project, where there will be lucrative contracts awaiting the cronies, to ensure new stream of regular income in the coming years when economy is bad.

I think the reason why the barisan led federal government is reluctant to relinguish the ferry service is because they are worried that Lim Guan Eng might turn the service around like the state finances.

Killing the big dream of LGE i.e. the sea tunnel off Gurney Drive is more satisfying than waiting for a CAT ferry service to resurrect too soon on Easter Day which btw requires massive short term financial subsidy from state coffer. Disruptive marketing offering (of an alternative sea tunnel at the present Pg Ferry Terminal of a shorter travel distance & faster construction at less costs) can do damages to Gurney Drive sea tunnel viability which may still undergo construction). How to disrupt a competitor’s offering of an alternative channel via a sea tunnel that may have serious longer term… Read more »

The idea to eventually ‘kill off’ this ferry service on the basis of business losses is highly questionable since this is a public service not only for Penangites, but also for Malaysians & tourists who come to Penang for a purpose. My hindsight of this debacle is a calculated counter strategy to Pg Gomen sea tunnel in the making. The Feds may be devising an alternative transport channel to counter the choice of sea tunnel which is longer, & more time consuming & more costly to build in deeper water. The present direct link (using the ferry east-west alignment) is… Read more »

Are you sure the fed guys have no interest in the Penang govt’s tunnel? Who exactly is Zarul of Zenith Consortium?

This is my hindsight from my art of war strategies learnt from days of guerrilla marketing.
You can also learn from the Chinese way of competitive doing business of close proximity.

Just go to Campbell Street & see why so many kim tiam (goldsmith shops) so close to each other & yet some survive to some extent.
Al Ries & Jack Trout (famed duo for the Art of Positioning / Differentiation) may have to come here to learn a thing or two (beyond being the first) from the Chinese art of business disruption via geographical proximity.

Anil, now you have said it, Let’s tell you. UMNO people. How do you think they can get the go ahead so fast

The return of (Azmi) Yang, may the right force be with you otherwise sure doom one, hahaha!

Yang’s back to tip the unbalanced comments in the mighty river Ganges?
Anil may have to swim with the stronger currents, whichever the mightier flows!

The real question is the reason why PPSB won’t hand over the ferry because it want to keep the valuable land the ferry sits on?

IF Penang govt take over the ferry services on imminent domain basis, then it is obligated to pay based on the rev of the operation and not the land cost since the land is not commercial property. But if they shut down the service eventually and develop the land eventually, they stand to make a pile.

The prime land will be even more valuable when Penang Sentral is operational?