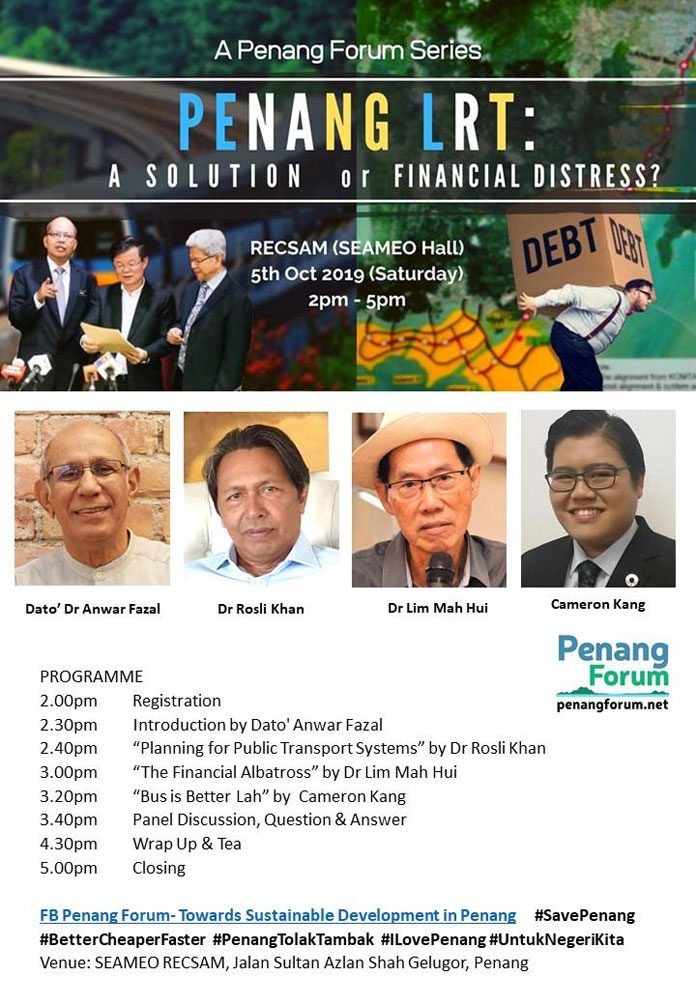 Come for this forum tomorrow (Saturday) afternoon and let’s dissect the sales pitch for the proposed Penang elevated light rail (LRT). This single LRT line in Penang Island (from the airport to Komtar) under the bloated proposal by SRS Consortium will cost more than RM10bn.

That is more than the cost of bus rapid transit, modern trams and an expanded ferry service for the entire state, including the mainland, under the original Halcrow transport masterplan.

And they expect daily 81,000 ridership for the SRS LRT when it is completed in – get this – 2038! That is down from the earlier projected daily figure of 115,000 (ie 42 million per year) which many critics had ridiculed. In contrast, Penang’s present bus ridership for the whole state is about 90,000 per day.

Who will pay for the annual LRT operations and maintenance cost of about RM170m if the projected ridership figure is not met?

Contrary to widespread belief, buses in Singapore carry more people than the MRT or LRT.  Check out these 2015-2018 ridership figures from the Land Transport Authority of Singapore:

So why isn’t Penang focusing on improving our bus service instead of spending billions on mega projects that we can ill afford?

Although the video below is about monorail (which the Penang government has also fallen for), it shows how people can easily fall for slick marketing talk.

Penang LRT will not have good ridership to justify its high cost simply because people in Penang still treat taking public transportation as low class, prefer to drive own vehicles. Young ones make it a priority to own personal car (not home) in order to attract potential spouses!

That’s right. How can we mingle with the smelly masses including foreigners, especially when we are exploiting them?

Tongkat with Dignity
Reply to  glissantia

Don’t be a racist. Are you not smelly with sweat… ? You should instead question those unscrupulous towkays exploiting the wailaos.

See hypocrites of peng land lang. Where are the green credentials? Soon parts of peng land will be buried by seawater. Car? Ride on sampan and share with strangers

Who is spinning? Peng land forum said youth are more environmental conscious. So they don’t care if in 40 years time, if the sea level rase another 0.5 m. He needs a sampan and not car.

New Forest City soon at Gurney Drive? Shocking, the amount of land they reclaimed is a joke. Please revamp our bus system and focus on bringing new business. As I’m typing, two mega-condos is being built right in front of me.

The protest in Hong Kong has led to a surge in interest in Malaysian real estate. Many are intetested in making Malaysia their second home. Will it help to remedy the overhang issue?

organised by Penang forum? hehe…another so call forum in fact non other than syiok sendiri show filled with one sided view…birds of the same feather flock together same like the finding dignity nonsense..LOL

Ask the expert. Adding more buses will improve the transport when the roads are clogged with cars? The buses jerk or stop and go doubling the time and causing discomfort and the vomiting as compare to smooth as compare to monorail or lrt. With buses there must be improvement and expansion of roads. Ask anyone who will be attracted to public buses? Slow, crowded and caught in the traffic jam. Tu lang kbkb as he waited more than 1/2 hr to come. Sydney has a new metro. A lrt that comes every 7 minutes and slightly longer during weekends. People… Read more »

Tongkat with Dignity
Reply to  Shriek

People loke you are stupid to waste money on personal cars that depreciate fast in value.

Learn to take public bus, save on petrol, save the earth.

For goodness sake stop kpkb on tunglang.
You should spend time questioning DAP instead for keeping quiet on many issues and dare not pursue New Malaysia agenda for fear of angering Bersatu.

Shriek
Reply to  Tongkat with Dignity

Shriek
Reply to  Tongkat with Dignity

Why deviate the topic and the subject here is peng land tuk tuk chia. Why just ask DAP? Pkr orso said … No non bumi ministers and top gun like Dr Lee, sim, and tian Chua. They are not ghost.

DAP is now muted. Quiet and dare not question those unfair policies.

Wee Ka Doing will get a partner soon after Tanking Piai by-election, provided Umno can give in to MCA. But more side show will take place.

Now everything has a racial tone and developers party is being used as a pinching bag and boeyman. Otherwise they said culture, religion and the rulers are being questioned. Developers party must get outspoken bumis to rebuke those who only raise and talk race and religion.

More will complain next year when petrol subsidy will only for B40. M40 will pay more for their beloved cars. Better start taking public transportation, save your money to buy a house instead.

Yes, car ownership will be very expensive soon, eroding your ability to buy a home!

Budget 2020: For motorists who are not eligible for BSH, they will receive a special Kad95 which allows them to enjoy the fuel subsidy at a discount of 30 sen per litre limited to 100 litres per month for cars or 40 litres per month for motorcycles when purchasing RON95 at the petrol station.

The Kad95 will be implemented progressively during the first quarter of 2020.