At present Penang is experiencing traffic jams only during school holidays. Soon this will become a daily affair – especially if more housing areas get developed or if a road tunnel is constructed to link up with Butterworth/Seberang Perai.

Road tunnelling in urban areas also will result in a five to eight year period during which streets are dug up for relocating cables, pipes, etc. and massive flyovers at interchange points will be constructed. More car parking facilities will be added, further eating into open spaces that once were used by pedestrians and children playing.

Experience all over the world has proven that private car traffic in conurbations above one million inhabitants – such as Penang – never can cope with the demand for passenger trips. Lately, Bangkok and KL had to learn the lesson – that their endemic traffic jams can be only reduced by rail-bound public transport. Neither adding more buses into the jam nor constructing another layer of elevated freeways can replace rail-bound public transport; they only will delay the final collapse.

Singapore had planned their MRT system already in 1960 (by the way, the Public Works Director in the 1980s was the son of the traffic controller of Penang Airport).

While Penang Islanders are dreaming of airports and road tunnels, an even bigger impact on their traffic system is about to happen: the age of fast long-distance train travel will reach Butterworth railway station in a couple of months. Japan was the first country after World War II to operate the Shinkansen ‘bullet trains’, followed by France (TGV), Germany (ICE) and now Italy, Spain, Taiwan, Russia, Korea, China and…

Already, in the 1990s, a Malaysian Ministry of Transport delegation had studied the German ICE-system. With a decade-long delay, now the fast-speed-line is constructed beyond Taiping and already in operation between KL and Ipoh.

Soon inter-city trains will run hourly between Butterworth and KL centre at a speed of 160 km/h, covering the distance in less than three hours – much shorter than a flight or car ride, and much cheaper too. 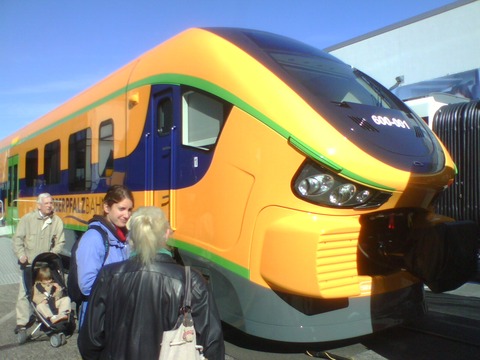 Then less attention will be given to Penang airport, as well as the second bridge. However what will happen to Island-passengers, arriving in Butterworth in style and comfort? Old taxis awaiting them, offering an hour-long ride to the Island for RM50. Alternatively, there is a way across a maze of car-waiting areas, ramps and stairs to a rusty ferry waiting platform. 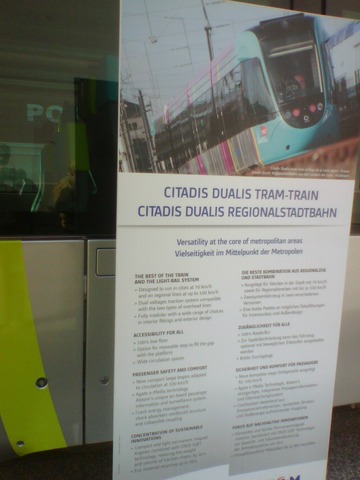 Also on the Island side things have deteriorated since the backpacker days of the 1970s (except, that the buses are now air-conditioned and safer).

Well, to sum it up: the Island requires a fast rail link to the main line sooner or later. Rail and road can only run together on bridges, however not in tunnels.

At last year’s “INNOTRANS – International Trade Fair for Transport Technology” in Berlin a train system on exhibition is designed to operate like an LRT-tram in urban areas as well as a commuter train in the region (like in the photos right and below in Loire valley, France).

It should not happen, that Seberang Perai constructs an MRT-system, KTM operates Komuter and Inter-City trains, while on the Island only trams will operate. 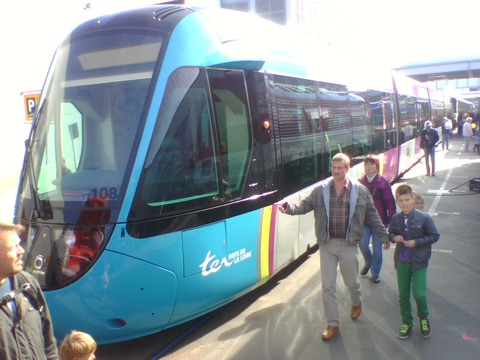 Certainly, trams can serve well the Island and a modern ferry link can well serve as connection to the mainland – for the next 20 years. However there is also a future beyond the mid-term, and whatever it will be, it should be designed right now as an integrated system with eventually common tickets and coordinated timetables and operated by not more than two companies.

(Actually, I was expecting a Penang delegation at the INNOTRANS Fair.)

In our weather, with the right protection from sun and rain, most of our journeys for most healthy people are well within 10 km and therefore easily done on a bicycle. That is a nightmare for a capitalist. Don’t expect the highway-car-petrol establishment to surrender meekly to public transport (BRT) and bicycles). Even when there is a mega-project, it will be allowed to fail through lack of maintenance to ensure “repeat” business. There will always be excuses actually motivated by greed. Apart from the safety of bicyclists from cars, what about their safety from crime? Even motorists and motrorcyclists are… Read more »

I am sorry to read your statement, I suggest you look further into traffic problems an see why USA and other countries are going to LRT systems Monoral is a flop Sydney is pulling these down Both System in Malaysia are causing head aches ,they are not friendly to the old and Handicap people
Ric

Unfortunately, we are entering the era of frequent paradigm shift, especially those praise “instant noodles” that being praise by “expert” (AKA economy writers,etc) . Half past six government always choose the easy way, and hope the cheapo “silver bullet” will build legacy and work wonders. It is a fact that, monorail can’t cope with the population growth, nor the infrastructure practical. However, those in place can always spends tons of public money promoting their own propaganda. While in Bolehland, the so call Public rail transit monorail, is none other than CEMENT tycoons lobbying project. And to Ric, MRT is NOT… Read more »

This is again another example of refusing to face the reality. The writer is wrong to point out that rail type of transportation is an inevitable solution that we need to adopt to solve our traffic problem without looking at the time, funding and space constraints. What is wrong to have a bus operate like train at certain intervals of the day? If the high speed train connecting Butterworth to other destinations become a reality. The fastest way to cope with the issues to upgrade the ferry and have more frequent operations. There is no way to find any more… Read more »

I agree partially on some facts, but not on the BRT. Bus need driver. And maximise the bus transport efficiency , extend the length to carry 200 person at a time, is not practical for Malaysia town road. HOWEVER, it is feasible to having long bus at the main road. But again, the devil is in the details. That’s why all Bolehland MRT,LRT keep failing and bail out using billions of tax payer money . EU country start realise the problem, extending journey using bicycle/padelec vehicle. While Bolehland still spending billions bails out Proton and implement policies to ensure the… Read more »

Why not Penang Gomen give this a try: give Rm500 Buy-A-BicycleVouchers to Penangites interested to cycle to work or for leisure. Add another Rm500 incentive after a year of cycling with proof of reduced weight (minus 10kg). If cycling is considered not practical under the hot sun, someone at FTZ please invent a bicycle umbrella for added comfort to encourage cycling with a breeze! Or better still, a mini moisture fan for cool-cycling. If those Tham Chiak Kuis can withstand the hot sun while walloping Teochew Chendol in Lebuh Keng Kwee, what is cycling with a breeze under the sun?… Read more »

First, Anil, I am not sure how deep you digging the details with Alex Koenig on the transportation logistics. For Asian, implementation is always on the surface, many Asian simply hallucinate “silver bullet solution”. While for German speaking people, when talk about implementation, they will draw a blue print and details to make sure there is no “patching” works happens in the middle. While many Malaysian thinking Singapore and Hong Kong public transport is “superior” and always hope to copy them, but that is not the way to go : HK and Singapore population has face STAGNATION, that’s why their… Read more »

One point you mentioned, Singapore public transport also has to cope with growing population:

Plus the growth in foreign labour.

Yes moot I have seen cities which are very bicycle and even pedestrian friendly. In some areas they even have separate lanes for bicycles and pedestrians which makes cycling very safe, friendly and easy. Those who don’t own a bicycle can rent them easily at designated spots along the way. And if you don’t want to rent, you can always walk. Sadly in Pg, the authorities think that a bicycle lane is simply painting the symbol of a bicycle on the road. Without properly dividing it from traffic. That not only is dangerous, it causes confusion. What does it mean?… Read more »

Wrong to say that Selangor State Government has control in the peripheries. After the 2008 election, Ronnie Liu wanted to make full use of of of the redundant buses as a community service to cater for senior citizens. Law is law and UMNO is still using bullock cart ideas. One can still use shared taxis in Perlis, North Perak and East Coast as it is the Federal Government issues vehicles licences.

Well if you think UMNO will block any effort to ease congestion in Pg then they can just as well block the construction of the undersea tunnel plus the two highways planned. To build an undersea tunnel you would need approval from countless regulatory bodies which are controlled by the fed govt. HIghway authority, transport ministry, JKR, bomba, department of environment etc. and the list can go on and on. They can even refuse to grant a license to the company you appoint to do the construction. If that is not enough they can even close down Rapid Pg and… Read more »

It just amazed me they plan two bridge, huge investment in the double tracking, nearly move the airport to the mainland and thinking of high speed rail, and there is no plan to connect Penang Island with rail to Butterworth and future airport on the mainland?

What he says is true. However, he seems to be stating the obvious. Everyone already knows it. If we had a referrendum now I am confident Penangites will vote for a cross channel rail link and a comprehensive network of trams/underground trains throughout the island. The only problem is that politicians on both sides of the divide pretend to not know it. The federal govt seems to be more interested in building bridges and setting up tolls while the state govt prefers a tunnel and two major highways linking Gurney and Air Itam to an expressway which has so many… Read more »

Yes, Ric, unfortunately no one making the decisions pays heed.