The protests continue: A group of concerned Penangites gathered outside the Penang State Assembly this morning to protest in full view of Penang state assembly members and the press against an RM8bn six-lane highway that will burrow through Penang Hill with thousands of tons of explosives, cut above much-loved parks (Youth Park and Sungai Ara Linear Park) and affect a couple of hundred homes and business.

The protesters from 30 residents associations in Penang and about 10 civil society groups called for improved and more cost-efficient public transport that would improve sustainable mobility. In particular, they want the RM19.5km six-lane Pan Island Link highway, including over 10km of tunnels on the hills of Penang, to be cancelled. They are also calling for the mega transport proposals, put forward by a major contractor and two Penang-based property developers, to be reviewed by an independent international body of experts in sustainable mobility. 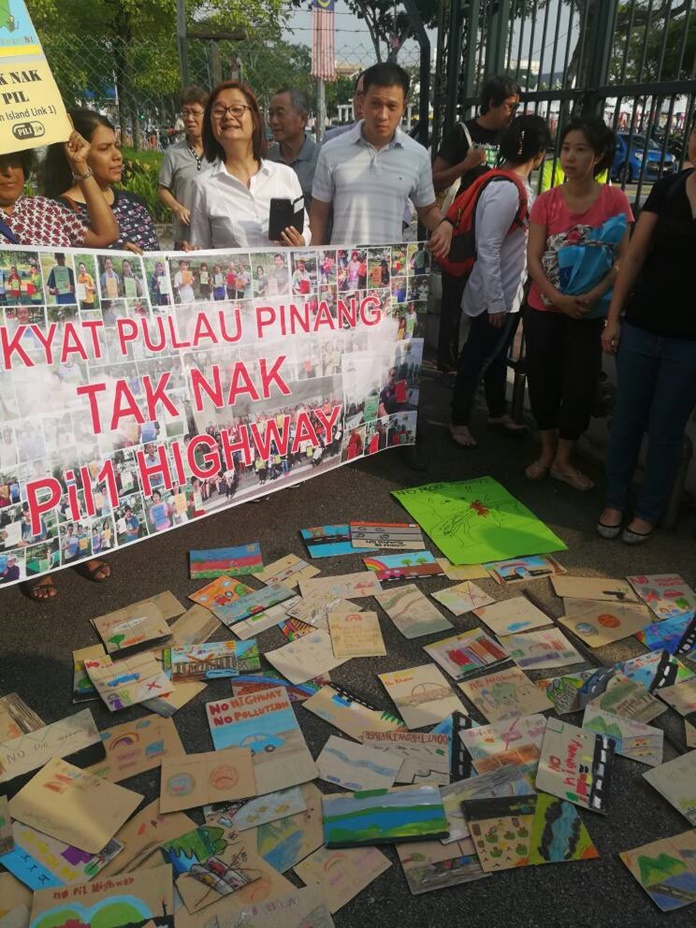 The much-criticised highway will affect hundreds of other nearby homes, businesses, schools (with enrolments totalling 6,800 pupils) and places of worship with noise and air pollution, add to vehicle emissions that worsen climate change, and upset the ecological balance.

The protesters were among 4,400 people, mostly concerned Penangites, who have signed an ongoing online petition calling for the cancellation of the highway project so that more sustainable alternatives can be put in place. (Have you signed it already? Still not too late.)

The original Halcrow transport masterplan has been modified by a contractor and two Penang-based developers in SRS Consortium. (They call it an “improved” version.) How? More cost-efficient modes of transport have been substituted with more expensive options such as the Pan Island Link. This has inflated costs from RM27bn to RM46n in the bid to justify the massive land reclamation to create three artificial islands covering 4,500 acres (much larger than Forest City in Johor) for mostly high-end property development. (Just about 20% of the homes on the three islands will be “affordable”.) SRS, after all, stands for Southern Reclamation Scheme, providing a clue about the real motivation behind the scheme.

Before the 2018 general election, the chief minister said that the reclamation was necessary as the state government had no federal funding to improve public transport. But now that the state has access to federal funding, such massive and ecologically harmful reclamation is unnecessary especially as there are better, cheaper, faster alternatives that will not upset the ecological balance of the state while reducing emissions in the long run.

Meanwhile, Penang Forum’s attempt at dialogue with the state assembly members has been rebuffed. An invitation to them for a meeting yesterday to discuss the transport plans ended up with none of them attending, apart from a few councillors from the Province Wellesley Municipal Council on the mainland. At other dialogues with residents from affected neigbourhoods yesterday, Penang Forum found that hardly any of them had seen SRS Consortium’s controversial transport proposals, which have not been put online.

The protest today has made it to front-page news in the Chinese press: 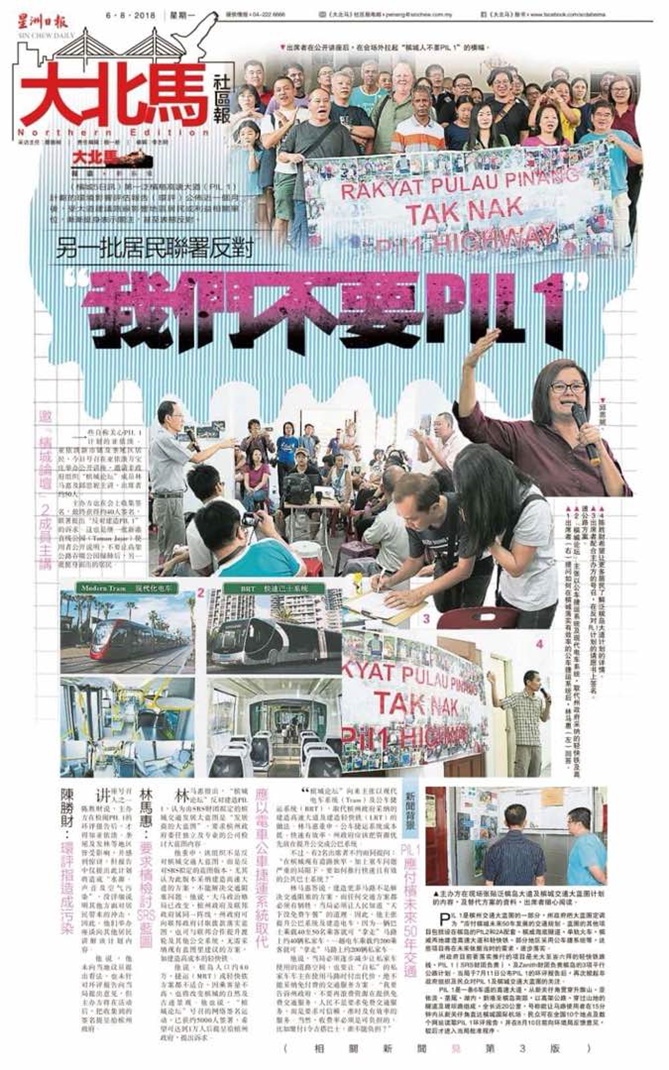 Bayan Baru community hope Sim Tze Tzin to give up his parliamentary seat to make way for his sifu Anwar.
Sim never honour his words (or Anil has made an error quoting him wrongly?) to reopen a library at Bayan Baru. He has angered many to be unrealiable.

Sim is agriculture focus now, so may be should set up Perpustakaan Pertanian instead?

Sim can set up Universiti Pertanian in Prai?
https://malaysiakini.com/news/437900

But he still owe Bayan Baru folks a library, no need to be one with Swarovski standard.

Penang is set have a new low-cost terminal to handle increasing passenger traffic.

If the new terminal is an expansion of the existing Bayan Lepas Airport, can expect the neighbourhood residents to protest?

So they are going to protest against extreme heavy air traffic? More co2 and no2 in the air due to more planes overhead like more traffic on the road and now overhead? More planes, more passengers and more traffic. When will be another demo?

I think those who oppose the Penang Island Link Highway will need to be creative in finding the best compromise solution to Penang’s transport problems, since there are other Penangites who want it in the belief that it will ease the daily traffic congestion which they claim to suffer. From the looks of it, this is turning into a Malay versus non-Malay, working class versus middle class issue, if it is not handled correctly. A good alternative may involve an LRT running between the areas where the need for transport exists, with key localities and vicinities around the LRT stations… Read more »

It is not an ethnic issue at all.

In principle it is not but from the looks of it, it could become an ethnic or class related issue. Just look at the ethnicity of the persons demonstrating for and against the highway and LRT.

Nah, it has nothing to do with ethnicity.

Back paddling by Pakatan Harapan on environmental protection as espoused in PH Manifesto. Now UEC promise of recognition is another back paddling??? Don’t take us for fools in your cruising the murky water of political arm twisting against Chinese education recognition as before during Mahathir era. Chinese education is certainly not to be put on a handicap for as long as way back since Mahathir was Education Minister. Paham kah Education Minister Maszlee Malik? Or are you still sleeping di bawah tempurong in the era of China – The Big Dragon of Asia. Five-year review for UEC unnecessary, says former… Read more »

These selfish people don’t want highways or roads around their house but they still drive elsewhere polluting air with exhaust and noise.

How about you? Would you like to have highway around your house? Just ask yourself first before making jokes on others …

Very good question for these no brainers!

Why an independent review of the SRS-proposed PTMP is needed https://www.malaysiakini.com/news/437600 Penang Forum is not opposed to a transport master plan. On the contrary, some members of Penang Forum had initiated and recommended to the newly-formed Pakatan Rakyat government in 2008 of the need for a comprehensive transport master plan for Penang; following which a Penang Transport Council was established by the state government. Several Penang Forum members were appointed to sit on the council. Below is a summary of the major reasons Penang Forum has called for an independent review of the PTMP. For one, the political landscape has… Read more »

Ah pek. They wanted Hal crow transport plan. If they wanted hal crow plan, same thing required. Built highways for brt. Otherwise where the bus can run? Brt bus joins existing roads? With new mtp, the bus can orso run on newly build highways. Full use of highways but brt only limit to bas. 9.30 to 4.30 and after 7pm, brt is under utilised. New highway can have bus lane at peak hours and off peak, ah pek car can use the bus lanes.
Pg forum just kau beh kau bu. No grey matters

A hard pil for many to swallow?

Chief Minister Chow Kon Yeow, in defending the mega projects, had said that despite Barisan Nasional making PTMP, of which the PIL 1 project is a part, a central campaign issue during the recent general election, voters gave a stronger mandate to PH. “You can say that the people of Penang did not agree with the election strategy by the opposition, to use the votes to cancel all the projects. The answer is very clear. “But of course, we are open to local communities who may not have prior knowledge of the alignment of the highway,” he had said during… Read more »

The project managers of a proposed highway on Penang island today allayed fears they will blast through hill slopes, following concerns by groups that it may be bad for the environment. SRS Consortium project director Szeto Wai Loong said they would use controlled chemical explosives to tunnel through the hills without affecting the hill slopes. He said environmental groups need not worry, as the tunnelling would be a slow process, blasting through the hills “metre by metre” at a time. Szeto said the contractors would use the “chemical blast” method, which is part of the “drill and blast” tunnelling method,… Read more »

Come one, come all Penangites.
We don’t have to be physical Avatars to battle the enemies of Nature. Is Anil an Avatar? Maybe in spirit like the Bunians of Malaya Nusantara!

People with deep pockets and nothing better to do. LOL