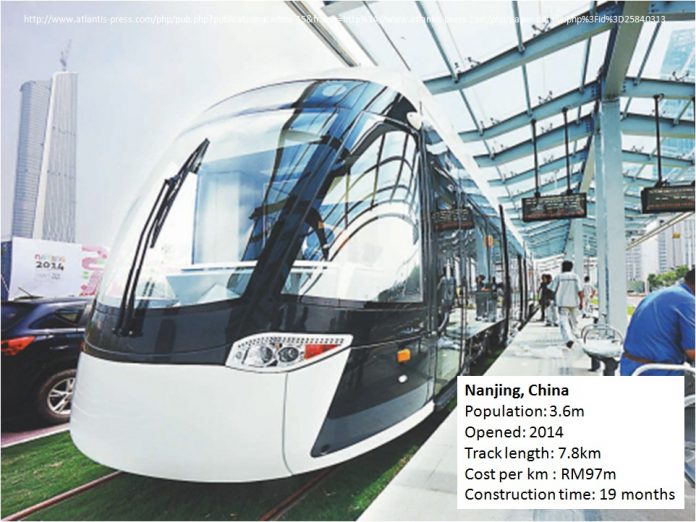 China is embracing light rail in a big way. Check out this report here.

Step forward light rail systems, the construction costs of which are 20-30% of a metro, with a similar wave of construction and development now underway across China.

At the end of 2014, eight Chinese cities operated light rail networks, with a cumulative distance of 192.6km, and several cities are on course to open their first lines in 2015. Plans are now in place to develop more than 2000km of lines by 2020 and up to 4000km of lines by 2050. But with 319km of light rail infrastructure currently under construction, and 1835km already in the design phase, this number is likely to be out of date very soon.

It is important to realise that modern trams may be built at street level, but they can also have dedicated lanes and be elevated over difficult or congested stretches. This is what the original transport masterplan consultants Halcrow (to whom the Penang state government paid over RM3m) recommended for the 17.4km route from the Penang airport to Weld Quay route – dedicated lane at street-level, elevated along certain stretches and then shared roads when entering George Town. The cost RM40-80m/km – or just over RM1bn.

Enter the Gamuda-led SRS Consortium, which promptly discarded the trams (apart from a short route in George Town), and instead proposed elevated LRT for the 24km route from Komtar to the Penang airport area (RM220m/km (excluding land acquisition costs) or RM6.2bn (including land acquisition costs) and monorail routes (RM170m/km) elsewhere – on top of a RM6bn north-south highway on the island. That’s before any cost overruns.

As a comparison, check out the cost of these trams/light rail systems in China. 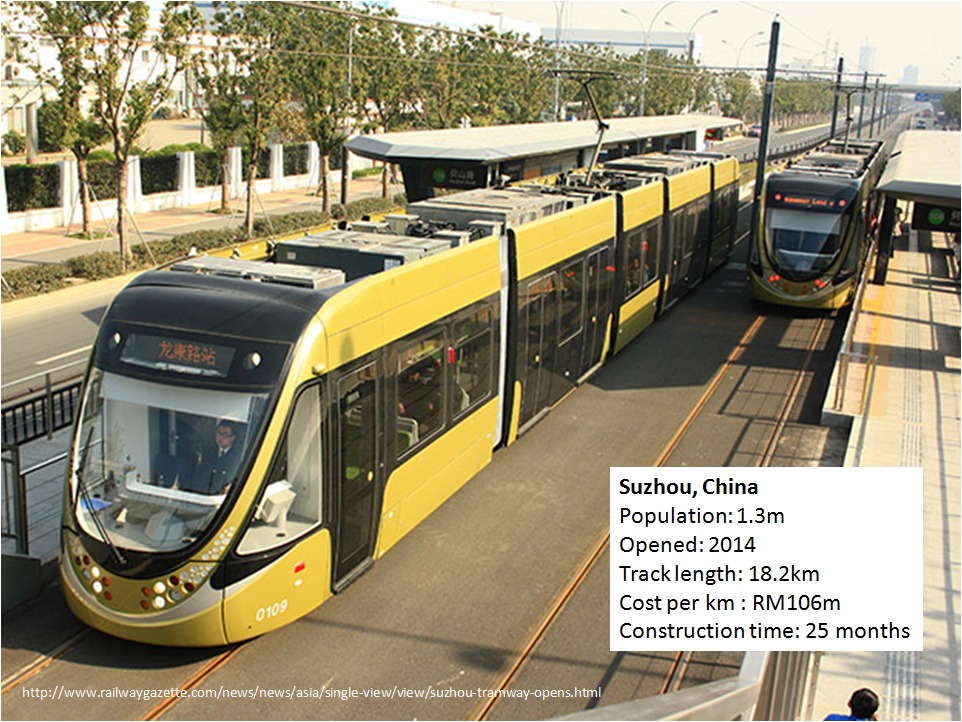 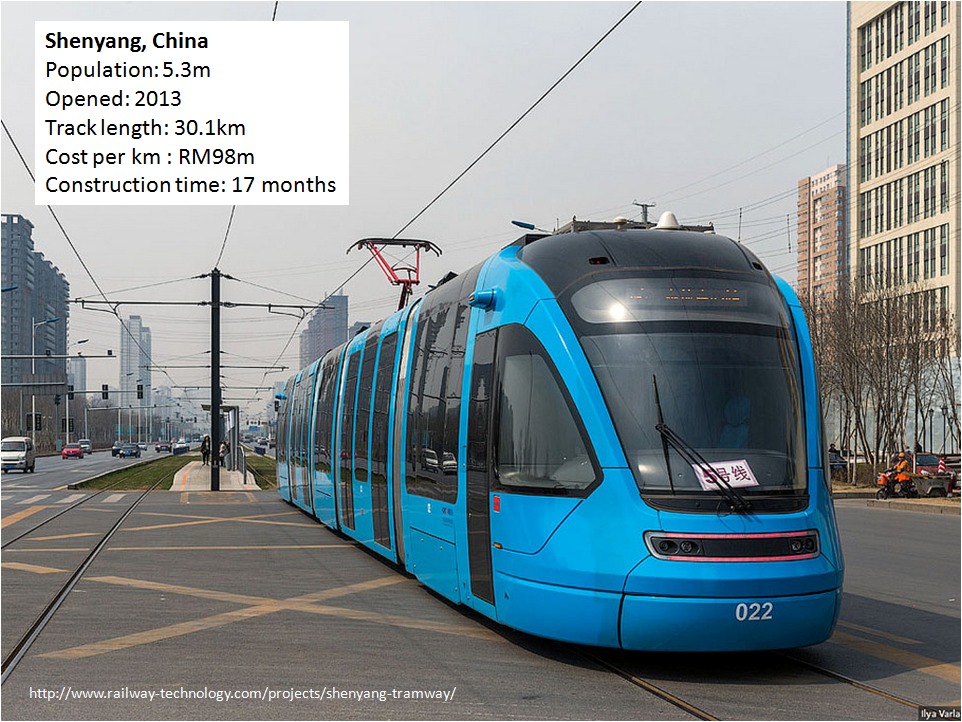 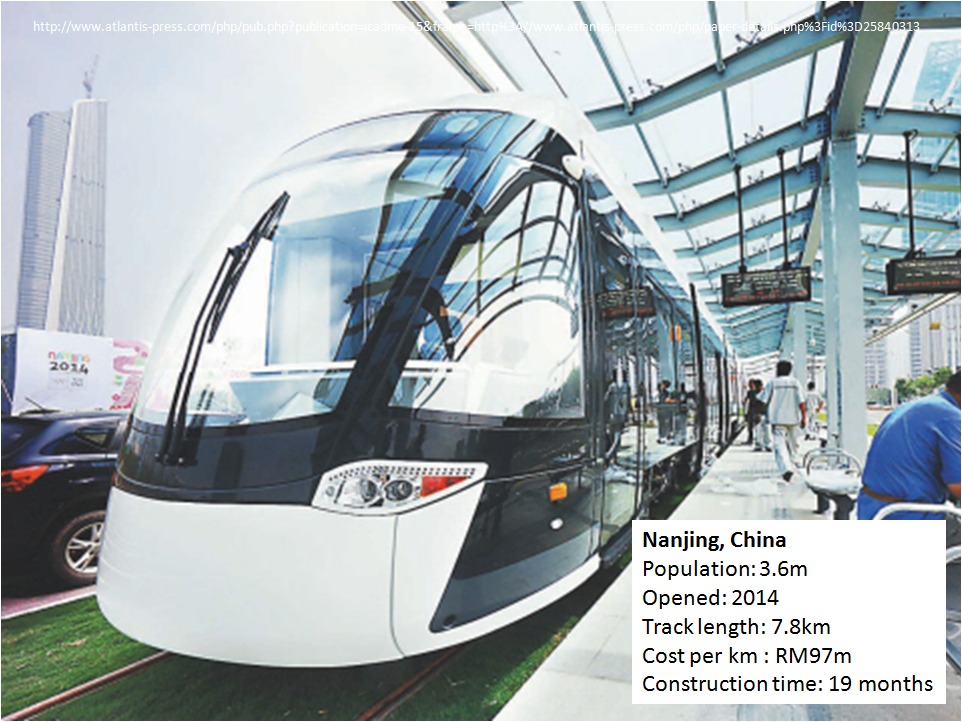 Cheaper, right? One of the reasons given by the state government for still choosing the more expensive elevated LRT is that Penang drivers have bad driving habits and roads here are congested.  You mean to say drivers in China have been driving habits and there is less congestion in cities in China?

Anyway, once they realised that trams are way cheaper, the elevated LRT proponents then cleverly argued that relocating utility lines and carrying out soil tests would raise the cost of trams in Penang from RM40m/km (their initial figure) to more than RM220m/km. You mean to say you wouldn’t have to relocate utility lines and carry out soil tests when constructing elevated LRT and monorail?

You mean to say places like Taiwan and Rio do not have utility lines? 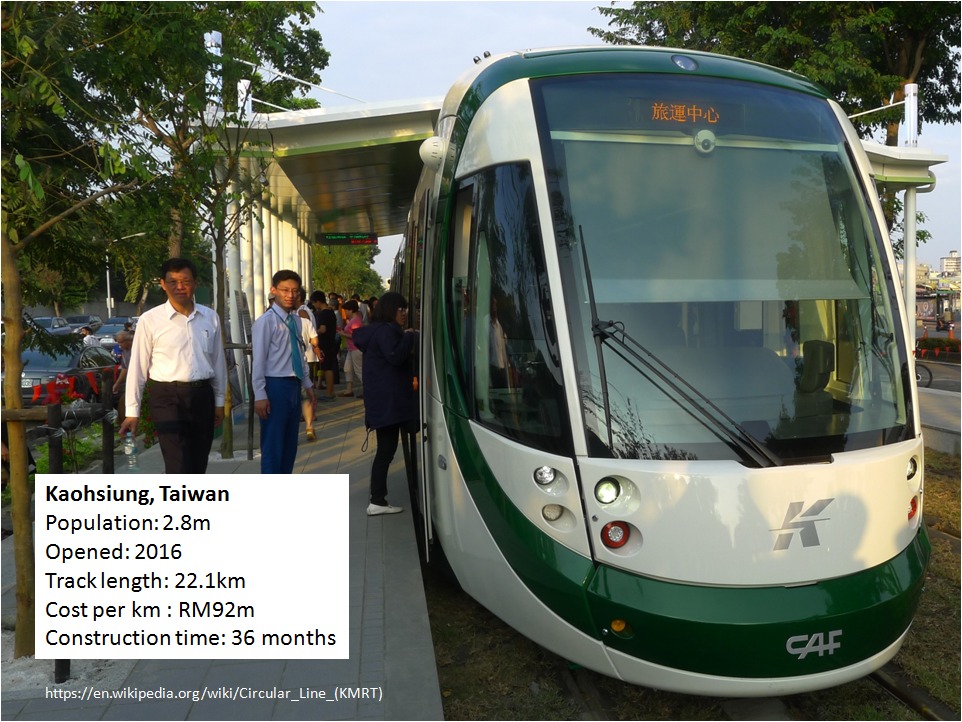 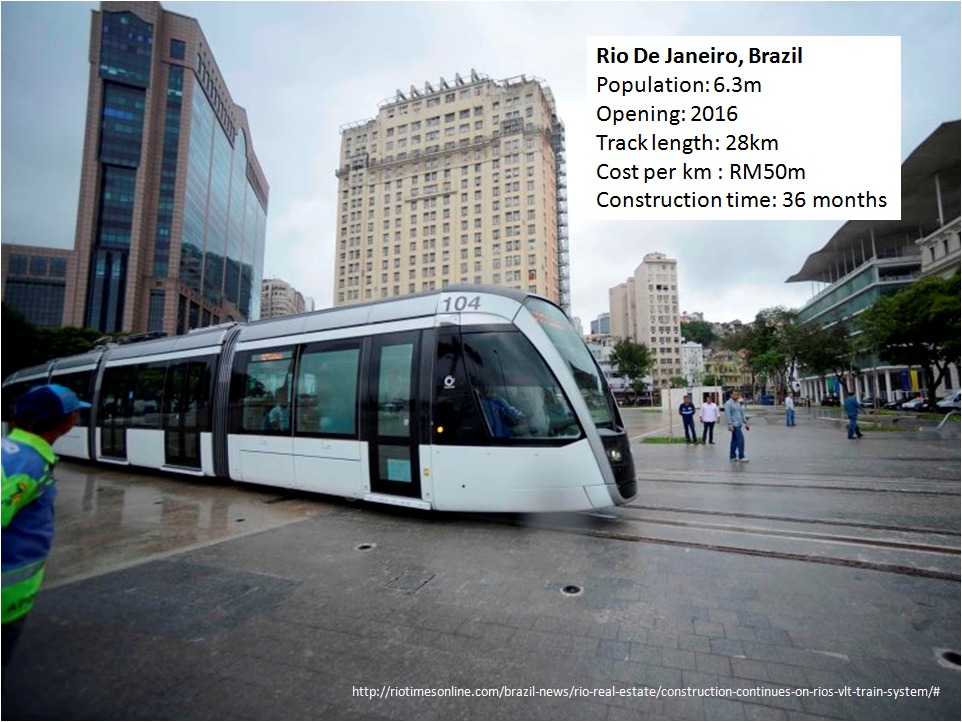 As for soil tests … look, they have built trams in Doha, Dubai and Casablanca in Morocco, which have a lot of desert land. 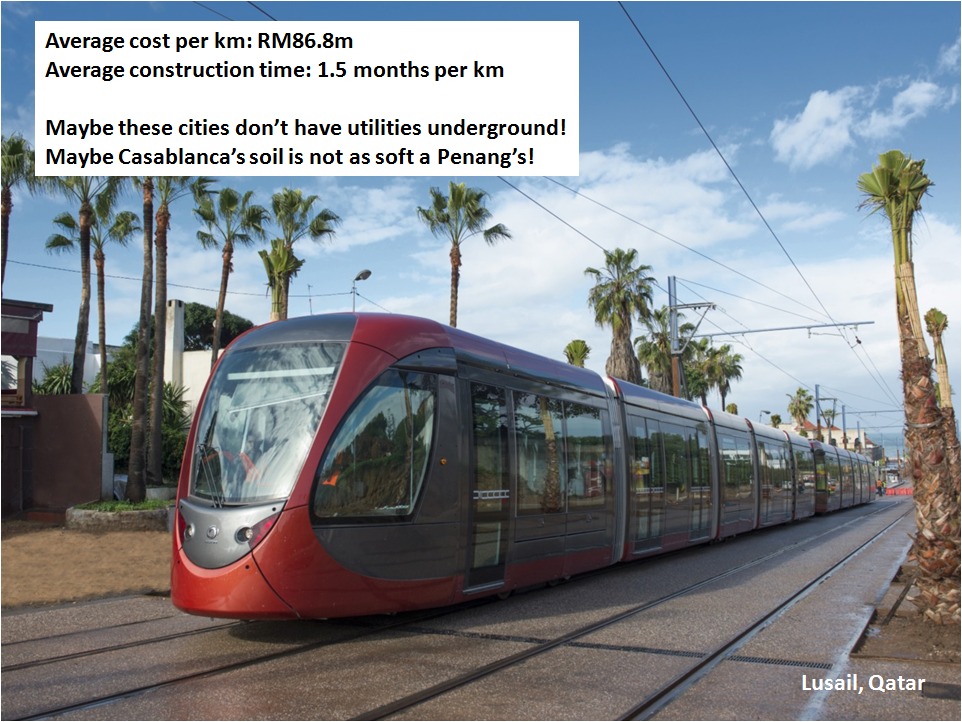 So why are we opting for expensive elevated LRT and expensive obsolete monorail?

Don’t think that trams are old-fashioned. Look at the future of modern trams. A few examples below: 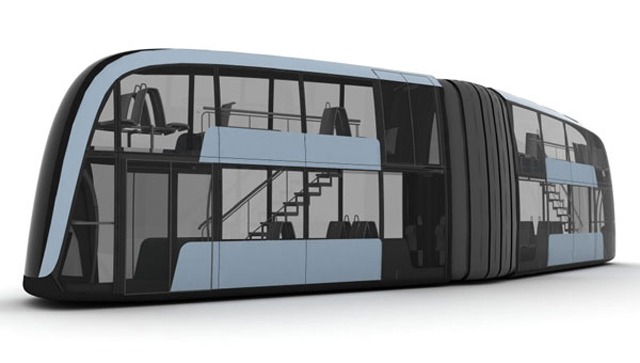 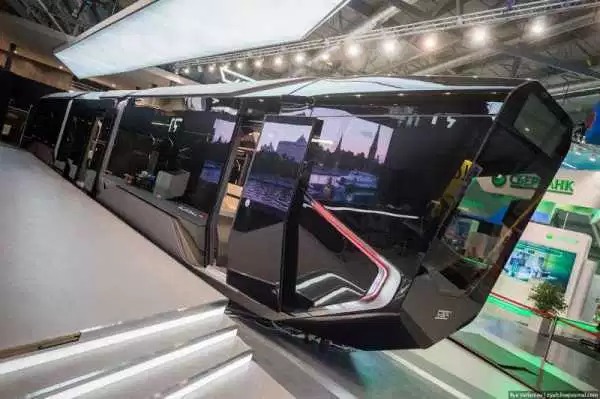 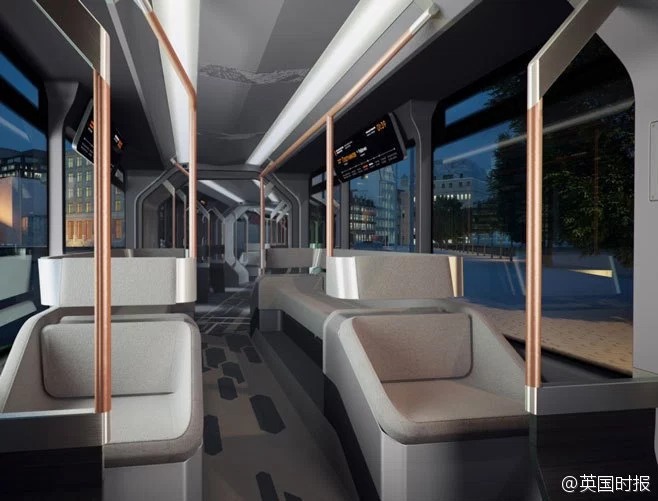 I haven’t been to the cities mentioned but in many Chinese cities that I had been to ( not the the 1st tier cities), most of the streets are very wide, at least 6 lanes…..4 lanes in the middle serving as the main thoroughfare, & 1 or 2 at both sides of the middle thoroughfare serving as service roads…..so in China, the roads are wide enough to accommodate a ground level LRT system…….not sure whether such a system can be applied in Georgetown & not cause massive disruption here

China unveils ‘straddling bus’ design to beat traffic jams.
The concept vehicle is designed to float above the clogged-up streets of some of the country’s biggest cities.
See report and video here:
http://www.theguardian.com/world/2016/may/26/china-straddling-floating-bus-beat-traffic-jams

The design of electric “straddling buses” lets cars drive underneath them, and can help reduce air pollution. Also known as land airbus, the new invention is less costly than subway systems:

Those modern looking train or tram as depicted here would not complement the heritage look.

check this out a Mat Salleh’s food adventure in Penang

Thanks. Off-topic posts can be left as readers’ comments under the Reader Alerts in the menu.

No need talk food as Anil is too busy as transport advisor?

dont get deceived by anil. look at his pics. his pic of china’s trams has exclusive tramway reserve. they do not share with other road users . no objection if pg can have the same exclusive zone. but how pg lang gets to the middle of the road to take tram? dash across the road, traffic n stop cars ar every stop or built unfriendly overhead bridge like in taiwan again in anil’ s pic.

throw a stone and where it lands , go to that city. a carriageway has at least 3 lanes on each direction. putting tramways sup sup sui. no problem.
here just widen the road kau beh kau bu for 2 lanes each direction road.
china has been roads n side walk for future cities

Thanks for pointing it out!

Anil
Penangites are fanatical about owning cars as bin chui reason. Light rail on the land will deprive them the wider roads to roam around !

Are Chinese better drivers then?

Now I refer to Food Ranger Trevor on YouTube that features recommended Penang Street Food. Anil and his allied Penang-lang over focus on cat justice and overlook the revenue generating food reporting to sustain readers interests.