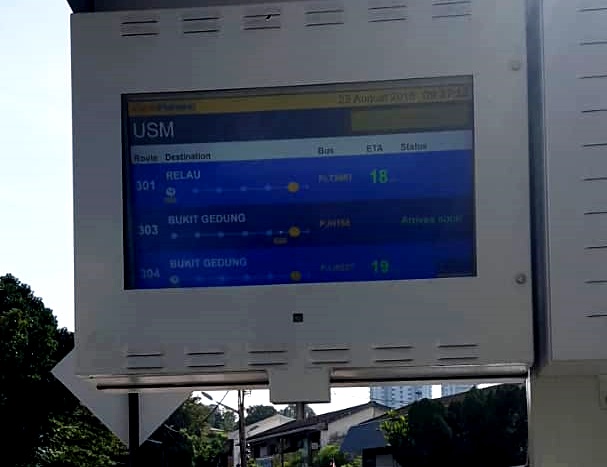 Finally, electronic real-time display boards are on trial at a few places in Penang. If successfully implemented, it would encourage more people to use buses.

I tried it by waiting for one bus, which the board said was arriving in three minutes, and yes, it did show up within a few minutes as stated on the board, only slightly delayed, probably by a long wait at a traffic light a little up the road.

Similar display boards have been used in many other countries for about a decade. Better late than never.

A couple of years ago, the RapidPenang management told me they were coming up with a real-time app designed in Korea to show bus arrival times. If this is still on, such an app would provide a bigger impetus for people to use buses.

In the meantime, we already have the excellent Moovit app, which allows you to plan your journey, shows the bus numbers and the interchanges, displays the frequency of buses and even the Penang ferries. Now if only they could incorporate real-time info into the app, it would be almost be like a Grab app for public transport.

RapidPenang should be more flexible with its season tickets. Not everyone needs a monthly season ticket. A daily or weekly season ticket may be more appropriate for some, including visitors and tourists. Season tickets should also be extended to the ferries. Perhaps discounted fares during off-peak hours.

Such season tickets should be sold more widely, say, at convenience stores. If parking coupons are widely available, why not bus season tickets?

Also, come up with an integrated single-ticket system that would cover journeys using more than one bus as well as the ferries.

To speed up the system, ensure that most of the bus fares are paid before a passenger enters the bus via season tickets, debit cards, bus-stop turnstiles or whatever.

Finally, introduce segregated bus-lanes along the wider roads, feeder buses and bicycle storage rooms at the main stations – and we would have the makings of a bus rapid transit system. No need to blow RM8bn on an exorbitant 19.5km highway, which will only get congested after a few years.

Our train service – the lost generation

What would be the best 2020 gift for Penang?

Freegan lifestyle can save you money.

Following the life of Daniel Tay, a Freegan in Singapore in this video:

there is no public transportation that can take someone from northern site to southern without transit, especially to work.. someone may say who wants that..I tried that once when my car broke down and there are people commuting from mainland to island using bus to office each day. The so call Rapid Airport bus which travels from South to North – makes hell of stop at each stops.. all these can be improve by proper planning and technology is there just to assist.

Hot weather nowadays.
Can try Ang’s Kopi Peng (iced coffee) next time you are around Komtar.

How many tunglang stars for this kopi?

Tunglang himself is the Star.

The sweet things are beginning to show by Penang Rapid. Can they create a mobile app incorporated with Google GPS tracking linked to real time Rapid buses route choices available at user’s vicinity? Mobile app linked to mobile purse for seasoned ticket payment at a bus stop kiosk (similar to bike sharing LinkBike)? We will see more sweet things happening with alternative transport modes of cost effective, user-friendly features & benefits to all Penangites who are willing & brave to UBAH habits for the betterment of state transport system without the insanity + ‘tua khang’ of 3-islands funding of PTMP… Read more »

This is good feature to attract existing bus users. However, non users still not able to walk a short distance from home to nearest bus stops, citing hot weather and potential threat from snatch thiefs.

Ah pek, you very lucky and can afford smart phone to track. Bayan baru scream for library with COMPUTER to access internet.

Sim busy with Musang King for PRC, no time for Bayan Baru library? He could ask Jack Ma to sponsor one, else those apeks cannot order online Lazada or TianMao.

Sim is tasked to grow agricultural sector.
He should promote urban farming.

Young Penangites will still aspire to own and drive own cars. Not like your time can ‘pak-thor’ with your girlfriend riding a public bus. Car is even more a prized asset (though a depreciating one) to many young Penangites as they cannot afford to buy house or condo. See how much they spend on fancy car accessories, decor and car sound system.