About a hundred concerned Penangites gathered peacefully outside the Penang State Assembly this morning to call for an an independent review of SRS Consortium’s outlandish RM46bn transport proposal, which critics have derided as a ‘property play’.

The multi-ethnic crowd of protesters this morning included concerned residents, academics, environmentalists, park-lovers, advocates of the fishing communities and the marine ecology, representatives of various residents associations and activists. 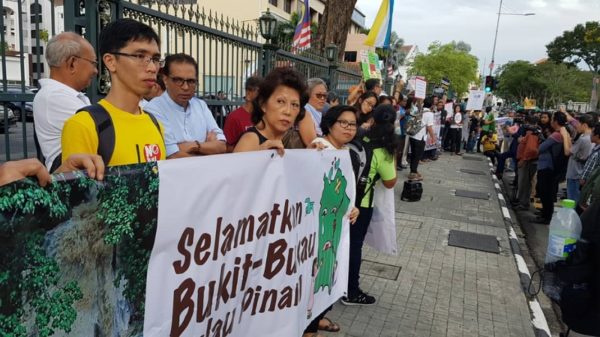 Independent filmmaker Andrew Ng, who produced the award-winning documentary The Hills and the Sea, led the crowd with chants of “No way, highway; we want public transport”, “Cancel PIL; review PTMP”, “SRS, go away; far, far away” and “We want BRT and modern trams”.

Many expressed dismay that SRS’ 20-volume proposal has not yet been put online for serious public scrutiny. The hard copies of the 20 volumes were only made public for a limited period around Chinese New Year at selected locations, with no photography allowed, thus handicapping those who wanted to study the thick volumes at length. Others wondered why a traffic impact assessment has not been made public.

The protesters called for an independent review of SRS’ RM46bn proposal and the cancellation of the Pan Island Link, which is not a long-term solution to congestion in Penang and will only contribute to more emissions in this era of climate change.

Time is running out, as the display of the environment impact assessment for the RM8bn Pan Island Link ends on 7 September.

Experts say a project of this nature should have a strategic environmental assessment as required in development nations. Under such a participatory, open and transparent assessment, all possible alternatives are considered so that the most sustainable option is chosen – in sharp contrast with the more limited and narrow Malaysian process.

Unlike yesterday, when state government leaders came out of the state assembly to meet a group of 10 supporting the contractor-and-developers’ RM46bn transport proposal, this time they were nowhere to be seen.

To their credit, police guided traffic and allowed the peaceful assembly to proceed unhindered – a positive development in the new Malaysia.

Meanwhile, signatures for the online petition against the highway have surpassed the 5,000 mark. Do sign on to indicate your concern.

Tomorrow, the youth are gathering once again at Speakers Square at 6pm to make their feelings about the highway known.

Down with the Penang govt ! Down with Developer Association Penang !

GOOD on these caring souls for taking action on an asinine plan!

No such problem if car population on the island could be curbed, and road pricing be implemented to reduce private car driving and to promote adoption of public buses

How to curb population and car growth? Pg forum can talk big but how? More buses on the jammed roads? Means more vehicles on road and increase the vehicle densities. Build brt means build more roads. Isn’t it more bus highways? Back to square one. Bus highway become hantu after 7pm as only bus has the right to use it.

Did they get permit from police to protest?

Bottom line against protestors are BRT and Trams ARE NOT solutions – because Penang neither has favellas and slums and nor can day dream about European living.

CM Chow. You said majority (?) Penangites supported the PTMP as seen in GE14 votes. Now, are you so sure? Pls for HARAPAN sake, don’t misled us Penangites. We voted for HARAPAN to mainly get rid of Naik Jeep Kleptocracy. Now, we want to get rid of unsustainable property play that tangoed in Komtar Tower since the days of Arrogance of Deity. We hope you don’t act as arrogant as your predecessor but have more empathy at ground level. Plus now, we know there is no inked compensation clause if PTMP is UBAH. Btw, how many Penangites travel from Teluk… Read more »

Ah pek, road to telok bahang is mostly single lane each way. If an ah peak wants to drive slowly then whole of north Penang is on snail mail. To overtake, driver must be very experience and must have good judgement. I was on a bus and the opposite over taking driver narrow miss the bus. Otherwise another news headline. If an accident occurs then the road will jam for hours. Ah peak pay for lim kopi and one ton mee and expect ho laio. Car owners pay road tax and don’t expect the road tax is for road improvements.… Read more »