Calling all Penangites: While the rest of the world is turning to more sustainable forms of urban mobility especially in view of climate change, here we are in Penang going backwards.

They are pushing ahead with that incredibly short-sighted plan to build an RM8bn six-lane highway (going up to eight lanes on a certain stretch) on our green island (at least what’s left of the greenery). This highway comes to you, courtesy of SRS Consortium’s shopping list of transport mega projects.

At a cost of RM8bn, this 19.5km highway from Gurney Drive in the north to the Jelutong Expressway in the South East, which will include 10.1km of tunnels, works out to a staggering RM410 million per kilometre. (Imagine if they were to used that money to improve our public transport instead. The cost of this highway alone could pay for the entire public transport component of Halcrow’s Penang transport masterplan – for the whole state!) 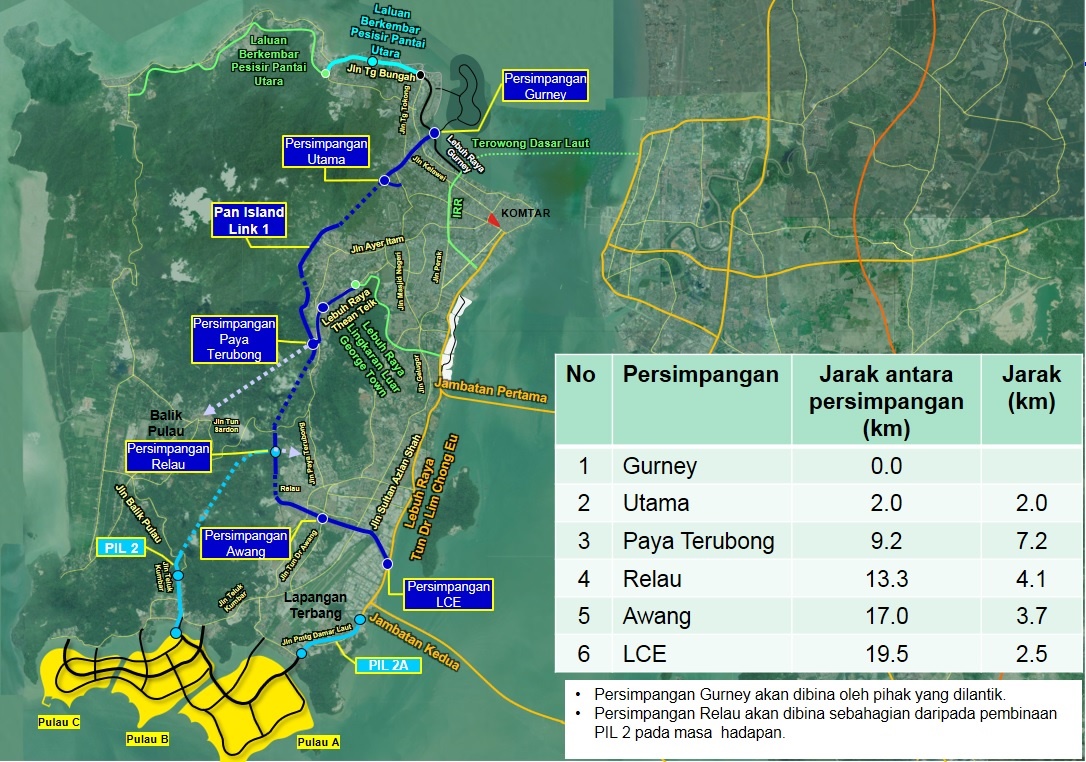 Remember how we were all upset over the inflated cost of the East Coast Rail Link? That was RM60bn for a 688km line – or RM87 million/km. This Penang highway is a whopping RM410 million per km! How do we even justify this.

The highway, known as the ‘Pan Island Link’ (the name copied from Singapore’s Pan Island Expressway?) will also be environmentally damaging, as this monstrosity will turn into a bridge above the Youth Park. Almost 40,000 square metres (almost 10 acres!) of our precious park land will have to be acquired for the project. Imagine a quiet tranquil walk in the park then. Not!

It will then hug the hills of Penang, even tunnelling through several stretches. It will even fly over the Penang Hill Railway and lurch 350 metres behind the Kek Lok Si temple before dipping into another tunnel.

It will soar high – up to 440 metres above sea level at its highest point. That’s half the height of Penang Hill! More than a fifth of the highway will be along sensitive, risky Class 3 and Class 4 hill slopes (ie gradients of more than 25 degrees). Wonder how many more trees will have to be chopped down. And they even plan to realign stretches of rivers for the sake of this blinking highway.

Still support the highway? You might think differently if your homes or offices have to make way for this highway – or if it is going to get too close to your children’s schools. Or if your shops and homes will be in the shadow of the viaducts, intersections and flyovers. 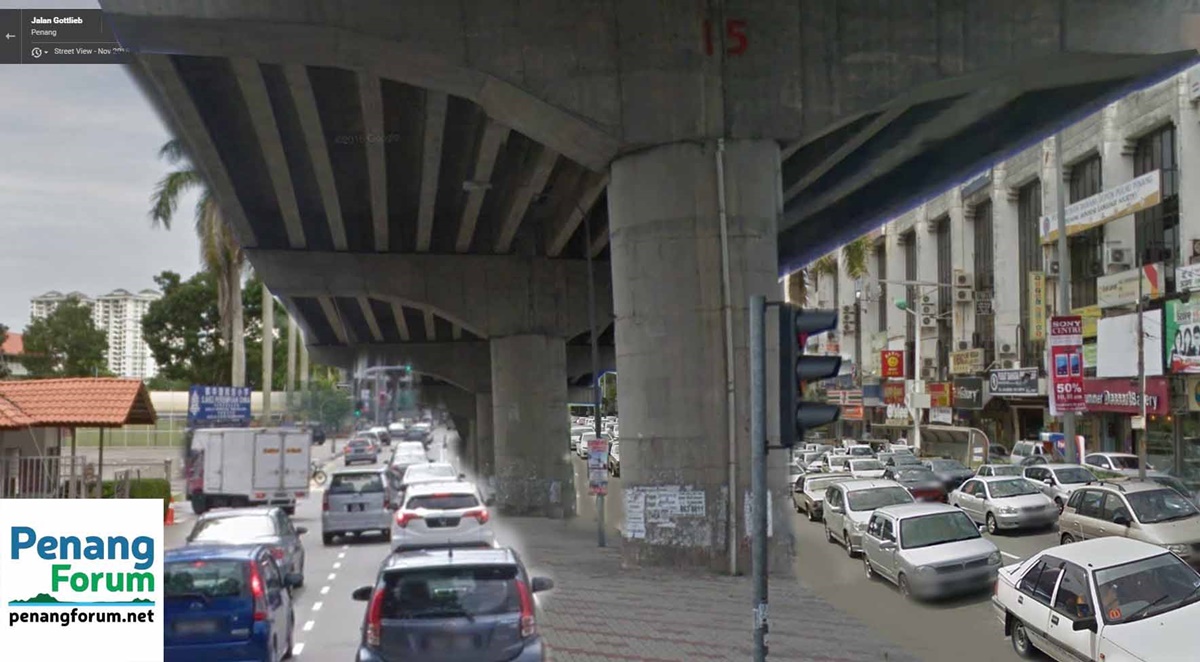 Among the “sensitive areas” within a 100-metre corridor of the highway in the Gottlieb Road/Bagan Jermal area are Phor Tay School, Penang Chinese Girls High School, St Nicholas School for the Blind, the Youth Park and a couple of temples. In the south, the schools close to the alignment are Sungai Ara Religious School and Seri Permai School.

And I haven’t even mentioned the residential areas that will be affected by the highway piercing through their neighbourhoods. (Affected residents are euphemistically dubbed “sensitive receptors”!) Check out this area in Sungai Ara, for instance: 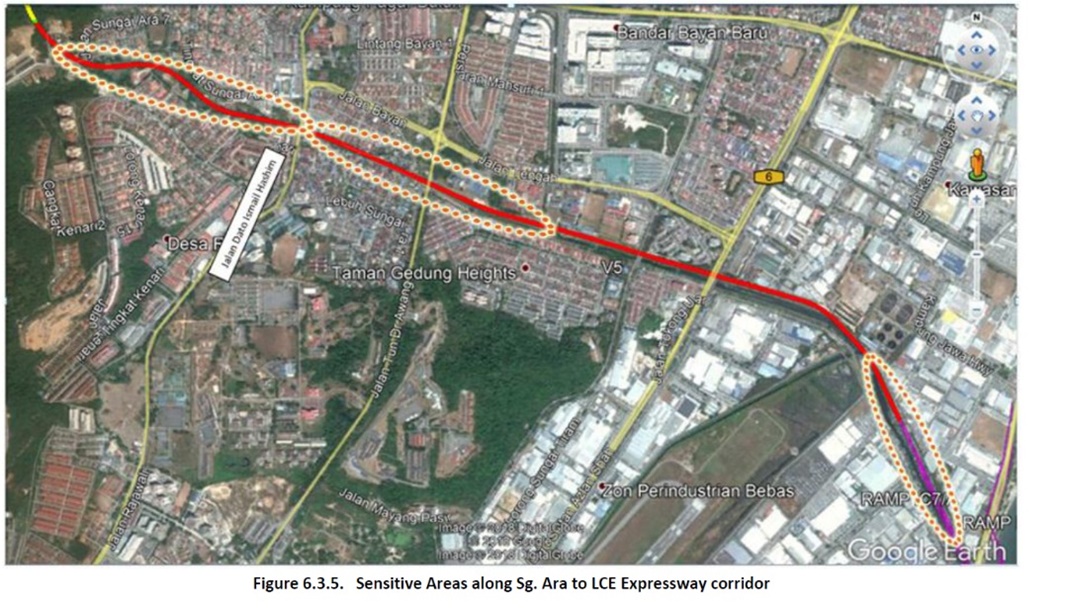 The project proponents will point to their “public perception surveys”, which showed that about 58% of the respondents supported the highway and 35% were against. But such surveys are meaningless. A lot depends on who you ask, how the questions are framed, whether the respondents were presented with more eco-friendly alternatives for easing congestion and whether they are fully aware of the long-term environmental impact of this project.

Of course the contractors will laugh all the way to the bank with their profits. But for many Penangites this PIL will be a bitter pill to swallow. It will encourage more people to use cars until the highway clogs up – and then what? We are back to square one. How short-sighted can you get.

As one concerned Penangite said, “The rest of the world is phasing out cars, banning diesel, turning to electric, pushing for public transport – and we are pushing for more cars, more pollution, more noise, more environmental destruction – all on a very tiny, fragile island.” Penang leads?

Go have a look at the EIA – over 800 pages of trying in vain to justify this colossal waste of public funds (yes, the sea, from which they plan to reclaim land to raise funds for this project, is a public asset) for an environmentally damaging project – and voice your objections for what it’s worth. The EIA will be put up on public display from 11 July to 10 August 2018 at several locations. 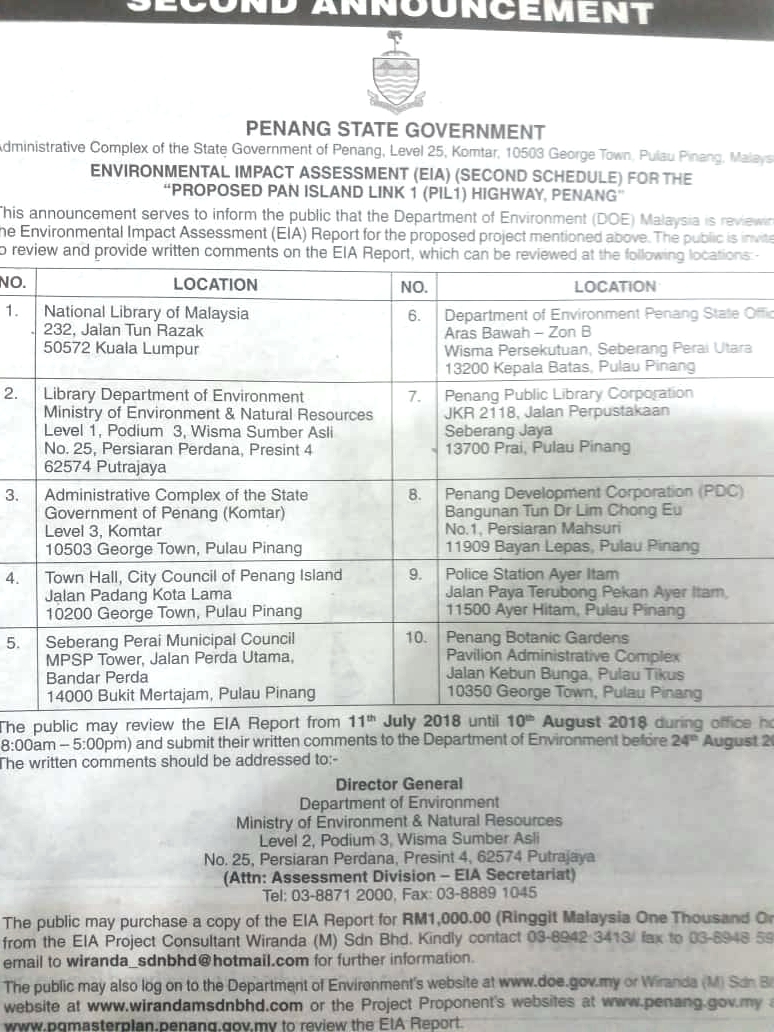 This was what I meant by the Penang Dilemma. Penangites voted for change, for a new Malaysia, and the change did come – but do we really want the excess baggage from the past, including monstrosities like this project, that comes with it?

Why Penang Forum never promote this cause?

A very realistic comment.
There are just too many cars around.
Unlikely for people to switch to public bus.

More wider roads you have more crazy drivers and less consideration. Gone …our beautiful Penang Island, no more greens !!! The rich want to be richer and they keep destroying the environment in the name of development for the people, bulls….. It’s all about filling their pocket with $$$$

Cheers Kopi-O kau kau! You are one the few with an enlighten thinking.

Want to witness kia-su & crazy drivers? Just stand at the roadsides of the beginning of Jalan Green Lane (from the roundabout of Glugor) till the flyover in front of Majid Negeri. May I add crazy hell’s bikers too.

When a young Penangite starts working, he or she needs a car to move around or for ego reason. No car cannot get to work on time. No car no bin chooi when go romantic dating. Car comes before an affordable own home.
If Penang Forum cannot understand this and work to change mindset, then don’t complaint about road expansion to accommodate rising private vehicles.

It is not just the job of Penang Forum to change mindsets. Everyone who is aware of the long-term risk must create the awareness.

Car is now a necessity and thus more roads are built to support the car growth. Car drivers will forget about sustainability when they are caught in traffic congestion.

Car drivers will forget about sustainability when they are caught in traffic congestion.
Q: Aren’t they part of the traffic congestion problem to curse themselves???
A: They truly need a 360° change of mindset not only to help them in the now but also do a caring service for their own generations to come.

Already so many cars and more are coming as people are upgrading because no GST, so naturally needs more road otherwise more traffic jam and congestion. So we should welcome the new transport plan. Sorry to say Penang young generation does not believe in public bus, as they want to be in control behind the steering wheels.

I expect my boyfriend to have at least a MyVi by age 25, a Japanese car by age 30 and a house by age 35. Else no marriage!

A continental BMW by mid life a dream for many.

Candy please beware your potential spouse could use Najibnomics to take huge loans to acquire car and property, only for you to share the high interest debt after marriage.

This is costing way too much. Who stands to benefit? And you’re right, Anil. Improving our public transport is the way to go. Encouraging more cars and building more roads is not. The future is not that far away. We will have to do away with cars eventually. Mass transport is what we should be moving towards, not building roads for more cars. Global warming is real or don’t they read the news? The contractor and government will claim that it will move traffic faster. It’s a very, very expensive way of doing it. The alternate way of moving traffic… Read more »

“Capitalism is the problem. What is the question?”

Your are probably living under a coconut shell or don’t drive. Is good there are plans to alleviate the traffic in Penang.

Penang however can sustain its food culture as it is always being featured by foreign media, see this latest iWalker on food at Little India Penang.

Good to promote and sustain the popularity of Penang street food served on streets not in air con malls.

Thanks for the suggestion but many people now worried about the RM8bn six-lane Pan Island Link highway.

The only way to stop it is to use court injunction ?

Monstrous Ugliness coming to Penang. To some, this monstrosity is money-making of monstrous proportion. But to some with environmental concerns, this is ‘fornication’ of nature with the consent of state gomen. A continuance of arrogant persistence of past state gomen prior to GE14. I thought after voting Harapan, the state gomen would have UBAH to be more environmentally responsible & caring. Nope! We are all taken for a ride across this ugly highway across & above Penang Hill Railway. Anil, another way to block this monstrosity is to form a body like that Save Penang Hill to fight it to… Read more »

Apart from the ridiculous size of the highway, 100% will b susceptible to land slides!