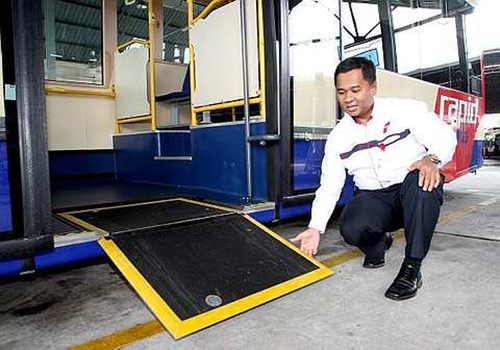 Prototypes of RapdPenang’s new fleet of 200 accessible buses reportedly were introduced in Penang recently – something that people with disabilities especially have long waiting for. These buses are Scania K-series models from Sweden with bodywork made locally. They come  with special bells outside the bus, ramps and a hydraulic system that can lower the bus for those on wheelchairs. See The Star report here.

But what about accessible streets? How are those on wheelchairs supposed to reach the bus-stops when uneven pavements and all kinds of obstructions – lamp posts, telephone booths, utilities pillar boxes, and sign posts smack in the middle of their path – make it all but impossible?

Transit (Klang Valley) and Penang Watch have made some observations here and here.

Have you tried these prototypes? What are your impressions? And can they succeed when the bus-stops themselves are not very accessible?