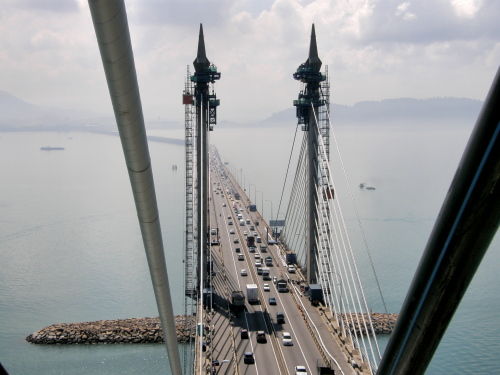 The BN leader has pledged to abolish toll for motorcyclists who use the Penang Bridge if the BN wins.

(To say that Penang would get nothing if the BN doesn’t win was outrageous. After all, Penang folk also pay taxes to federal coffers; so why shouldn’t the federal government fund essential infrastructure projects that would really benefit the people?)

In response, the DAP leader has vowed that Pakatan Harapan would abolish all tolls on the Penang Bridge if the opposition coalition came to power. This may be a ‘populist’ thing to do to win votes – but does it serve the best long-term interest of Penang?

It seems to be like a contest to see who can save Penangites more cash. This is shortsighted on both sides as it does not consider the long-term environmental impact of encouraging even greater use of private motor vehicles.

Instead, the toll collection should be used as a form of congestion or road pricing to control the flow of traffic into the island. The revenue from toll collection, after setting aside a small sum for bridge maintenance, should be used to finance the construction of sustainable mobility options.

Not SRS Consortium’s expensive shopping list of mega transport infrastructure projects though. Let’s go back to the Halcrow transport masterplan and work from there. If we do that, we won’t need to carry out unnecessary land reclamation (eg the three artificial islands project) for high-end housing (that few Penangites will be able to afford) to finance the mega transport projects shopping list.

Use the Penang Bridge toll revenue to also finance the expansion of the ferry service. Put more ferries into service, build more ferry terminals at different points of the mainland and the island and introduce new ferry routes to crisscross the channel.

AnilNetto now more focus on Forum matter, so those who wish to have foreigners views on Penang street food meantime can check out this very recent video by British lads

Hopefully after 509 the readers do rejoice for Penang food

Ahead of launch, Pakatan’s official music video out now on Facebook (VIDEO)
https://malaysia.yahoo.com/news/ahead-launch-pakatan-official-music-video-now-facebook-100800155.html

https://www.facebook.com/VitaminM.Official/videos/10156214122289192/
Vitamin M:
Hello Everyone!
Apologies for the long wait! But we r so excited to share this song with u as this is our biggest contribution to the Pakatan Harapan GE14 Campaign!
Here is “Bina Harapan Malaysia” – the OFFICIAL Campaign Song for Pakatan Harapan!
Enjoy this music video, and don’t forget to SHARE!

The video shows Malaysians have HARAPAN in their hands. Use your vote wisely.

Teng being rediculed by Zahid’s left hand gesture on his chin become a a hot GE14 talk as if he hax been “jinak” to become boh hood edisi 2.

A replay of Bo Hoot which Penangites absolutely shame on GilaGelakan!
Anyone dying for Ostrich-in-a-hole Hot Soup?

Aiyoh, this Teng Chang meoW is another Bozo-clown in Penang who is a real loose cannon.

Did anyone notice no Gerakan #1 & #2 was present to lend their support to Teng CY when he launched BN manifesto for Penang?

If I buy a spare part for Kenari, I will most probably pay 6%GST x how many times of GST depending on how many suppliers this spare part goes thro’.
This is not only GST 6% Absolut Vodka!
Pls don’t spin like an idiot in a math class!

‘If Chinese firm gets GST relief, so should local companies’ https://www.malaysiakini.com/news/420333 “Based on this reason, then the federal government should also give tax relief from GST to public projects and state government services as well as local councils, which would of course involve public importance,” Sim said in a statement today. He also pointed out that if CCCC, who hires foreign workers from China due to “language accessibility”, can get the tax relief, then the government should also provide the tax relief and other tax incentives to local companies to hire local workers and to raise the minimum wage to… Read more »

An electric train / tram on the bridge will ease the jam.

You mean the tram or train starts and stop at both ends? Then both ends will be worse than before and block any vehicles intending to use the bridge if without the final destination in the island and on mainland. You have to ask Dummo and Gilakan central gomen as they had the concessionaire to own the bridge. Pf why not voice out?

The government contenders are coming up with half-cooked solution that cannot be taken seriously – like the free port “idea.” BN, especially, fails in this attempt to be taken seriously. But of course, they don’t aim to work as a state Opposition; they are only looking for easy rewards. What would happen to the ferry, second bridge, the proposed undersea tunnel (or third bridge) if fees are waived on the first bridge? A better promise is to transfer the control of ferry from federal government to state government. Also bus service licenses. And release mini bus licenses like in Hong… Read more »

All govt. taxes/tolls on all vehicles should depend on (a) whether they are private/business (b) excess travel beyond a set allowance (c) payload by weight (c) pollution including greenhouse gases (d) burden to public wealth through potential damage to roads, buried pipes, need for flyovers, etc.

Cash Is King, Barang Naik BN won’t tell you the 1st Penang Bridge concessionaire sudah dapat durian runtuh for umpteen years!
Now shouting-to-give free use of the Bridge to motorcyclist is sap-sap-sui for these Barang Naik otak udang.
So, be very careful who you vote.

RM170 extra can have daily morning look-o for 5 months, BUT the risks are up there.

Drink Kopi-O for fun for 5 months but still have to face Bo Hoot antics to our detriments for the next 4 yrs?
I would rather work harder for a week & earn more than Rm300.
Pride is more valued than being part of Bo Hoot Gilakan!
Vote for DAP, vote for PKR!

Ask gilakan how and where they get the money? Who is anofher generous arab prince or like typical dummo, borrowing exceeds half of gdp?

Unti now did nothing to ask central gomen to transfer transport authority back to state. Either the toll to reduce pricing just to maintain the bridge or the funds to be used to operate train, trams or busways.
Now much road tax paid by pg lang cars and rechannel back to pg? Pf dedak and yet claim to have professionals to look for betterment?

Rail link for island and Prai, then to there and from there hail Grab/Taxi to reach home door front? Have anybody done cost analysis, and the intangible outcome of safety aspects if not in the comfort of own transport??? Think and plan in holistic manner.

I have got a weird feeling of voting Pakatan Harapan, it’s as if I’m voting for Dr. M or eventually the olden day UMNO !

u vote for one man only

Its about Najib versus Mahathir this time.
We got no other choice.
But the time is ripe to change the empire.

The BN ship is sinking, to be engulfed by Malay tsunami.