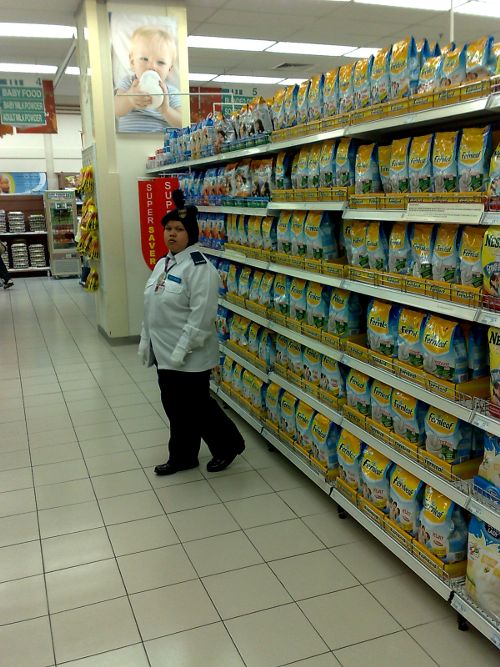 At Christmas, we recall the birth of Jesus in the midst of poverty and oppression. As we party and feast and make merry, it’s worth asking: did he have enough nourishing food as a baby bearing in mind that his parents were humble peasants struggling to make ends meet? Were they able to provide him with a balanced diet during his formative years?

Let’s spare a thought for workers, including factory operators earning RM600 to RM800 per month, who are finding it increasingly difficult to afford milk for their children. Recently, for instance, a woman complained to an activist that a portion of loose powdered milk  (it’s cheaper sold in bulk; not in tins) in a sundry shop along Penang Street frequented by those from the lower-income group  that used to cost RM7.50 before the petrol price hikes now costs RM10.50.

It’s not surprising that a certain supermarket chain has resorted to putting security tags around baby milk tins/packs. The tags are then removed by the cashier upon when the customer checks out.

If I was a desperate parent, I would be tempted to steal milk too. One pack of full cream milk powder ( 2 kg) costs RM 42. My youngest son consumes more than 4 kg (2 packs) per month. Add 4 tins cereal, it costs more than RM100 to feed him. My pension is only RM 1200.

Could an economic system that allows such a situation to persist be considered just?

The proposed privatisation of Institut Jantung Negara (IJN) appears to have not taken into much consideration the basic survival of the poor and the middle class. They would be hit if IJN becomes private. Already, many low-income folk are finding it difficult to cope with high food prices.

Many are now finding that their low wages are insufficient for them to live in dignity given the high cost of living and inflation. The threshold for survival for a family of four is probably in the region of RM2,000 to 3,000. But how many of us actually earn that amount of money?

With reference to your post on the Chicken Thief, what is rather shocking now is that when you go to certain supermarkets, you may now see a security guard in the milk aisle/dairy section. Previously, the guards would be keeping an eye on the liquor section.

The other day, I had the urge to ask the guard why he was guarding the milk section now.  His shocking reply was that there had been many thefts. According to this guard, people were now stealing milk instead of other things.

When a society degrades and when people are tempted to steal milk out of sheer desperation, it is a clear sign that that society is in trouble. People do not steal milk for fun or to satisfy their desires or wants. It is an act of survival. Most likely, the milk is used to feed hungry children or babies.

These are early indications that a segment of Malaysian society is being “priced out” of living in Malaysia and some have resorted to stealing basic necessities to survive. A good question here would be – why are people’s remuneration in Malaysia so low and not keeping abreast with the rising cost of living?

Ganesh, Thanks for the thoughtful comment. “Are you one of those buang bayi..” “Woody, think before you write. Since you are so smart to count and budget, pls budget your thoughts before you comment” It is just an opinion, there is no need to mount a personal attack of any sort, or attempts of smear my character or attempt to impeach me as person just because I have an alternative opinion. I respected your opinion and never asked anyone to shut up “by budgeting their comment”. No need, this is a healthy debate of opinion and let the readers make… Read more »

“don;t you think some of those snatch thief’s parent were responsible to bring the criminal to the world too by no ensuring the kids well taken care off ?” The above is the most stupid statement I have ever heard. Quite a number of kids who have been brought up well do indulge in crime. Infact I even know a pastor’s kid who was involved in crime. Also, if he has inherited an orphan, don’t be so cold hearted as to abandon the orphan if he the caretaker does not have the financial means. Can always try to strive harder… Read more »

Ganesh, I agreed with your statement, yes, the situation could have been orphan or something like that, if a person want to take on another child in addition to his own, the person should try to assess own financial capability, or if inherited an orphan from his relatives, perhaps the person should think about his own financial well being before taking on to responsibility on another person. Initially, one person starving, it could well ended with now two person starving, one probably is older and ailing also, now situation become two person burden rather than just one. Perhaps work towards… Read more »

Dont let these self-righteous and judgemental people tell you or anyone else how to lead their lives.

Rach,
I want to see you feed ‘home cooked food’ to your two month old baby if and when you’re lucky enough to have one.

Dear Woody and sachs
Don’t try to be a smart ass, talking about family planning ,nutrition and looking down on big families.

For your information, my son is a ‘special child’ and he does not eat rice, chicken, or junk food like other kids.

Its plain to me that you don’t love children, so you better not have any.

Woody, have you given consideration to the fact that the person might have adopted an orphan child because he is good hearted? Or more believable, maybe he is a grandpa looking after a baby whose parents (his son or daughter) has passed away? If you die, and if your parents are living, won’t you want the child’s grandparents to look after your child? Not everything is about economics and planning. Not just the poor, even middle class families are finding it hard to even maintain one or 2 kids, taking into account that they have to save for the education… Read more »

Anil, Quote- ….. One pack of full cream milk powder ( 2 kg) costs RM 42. My youngest son consumes more than 4 kg (2 packs) per month. Add 4 tins cereal, it costs more than RM100 to feed him. My pension is only RM 1200. -End quote A bit of interesting logic, a man well into age of pension still have such young kids at home ? How many kids is he having ? I am not against having kids, but I felt that we need to have kids according to affordability and not keep looking to government to… Read more »

Why are malaysian babies/children on a diet of milk and cereal? We grew up consuming local nourishment and being non the worst for it. Yeah food prices are up, so substitute and do some home cooking.
Govt leaders and politicians who asked the rakyat to do belt tightening and grow their own food should be voted out of office. So I hope we will all speak at the ballot box next time around.

The price of milk powder in this country is a symptom of a badly distorted economic system.

The world market price of milk has fallen some 30% over the last 4 months. Farmers in New Zealand are complaining that their revenue from milk is now below production cost. Combine that with reduction in transportion costs, and you can see the price of milk in this country seems to have anti-gravity capabilities.

Methinks there’s some SERIOUS price gouging or profiteering going on by the big milk distributors…..

ask syed hamid and the Chor fella. Of course, the IGP too. Its just IMAGINERY! Its in the supermarket boss mind only,ok.

M’sian below average income really frust toward the management as well the reorganisation of our country’s economy when the whole Globe was facing hard times.All the daily comsume items shot to the sky,when the petrol price icreased to RM 2.70.How come the Fed.govt.can’t realised the hardship of the overall below average M’sians?

Actually, the fees in IJN is more expensive than other specialist centers.

Jesus never asked us to celebrate his birth. The original spirit of the festive season, to spread goodwill among men, even for a day, has become like the den of thieves Jesus accused those of turning God’s house into. It has become so commercial decorations are already up in England come October, informs a friend. We are indeed truly blessed here in Malaysia. Yet we live in fear of poverty. No realistic welfare programme has ever materialized because, according to our Asian values, it’s a loss of face and for lazy whites. But corruption is an acceptable fact of life.… Read more »

quite a sad state of affair. Guess it is true that the priority of the rich and those in power is not for the poor. Am glad to be part of the community of believers that understand the message of Christ for the poor and needy.

it is a sign of desperation. a survey conducted several years ago in the US on shoplifting. in particular, besides teenagers and adults that were apprehended, mothers, even pregnant ones, shoplift out of their love for their babies. most of these cases, the supermarket surrender them to the police nevertheless. instead of being charged in court, judge ruling is that they perform community service of certain amount of hours, place in welfare homes or given a time period for them to seek out jobs including caretaking of their babies. do we even have any of these here? just look at… Read more »

That’s odd. Guarding milk. Maybe she happened to be on her usual rounds.

But you can’t really tell, can you?

Still have a safe New Year!

Merry Christmas and A Safe New Year to all!

Have a Merry Christmas. You have been a great conscience and source of information for all Malaysians. I am grateful for all your efforts.

Is there somewhere I can donate milk powder to?

Haa! Han2, This is a quesion of priority! Please do understand that there is no money to be made for anyone by making MILK affordable for the lower/lower middle income group. It makes more “income sense” to buy Mercedes for the Terengganu EXCO, or the 24 EuroCopter at elevated prices, or an AirForce Satu aircraft… Money well spent, and the country wealth equally distributed among the rich. Wonder if the NS tenders and contracts will be “re-distributed”, or “re-tendered” following the last cabinet reshuffle?

How can Malaysians be stealing milk when we can buy an Airbus Private Jet for the Prime Minister eventhough he already has one Global Express Jet at his disposal, when we can buy 24 Eurocopters which we don’t need yet, when we can buy Mercedes Benz cars for the Trengganu State Exco members, when we can spend millions on a national service program, etc? Are you sure Anil?