Today was not a great day.

I woke up this morning to find that my home had been broken into while I was asleep.

Here’s what they took:

Whoever it was must have been pretty desperate to break into my home as there really wasn’t much else to take.

It wasn’t a great feeling to be stripped bare, so to speak. Almost state-less and identity-less. But suddenly, I felt a lot lighter too. It was strange not feeling a wallet and handphone in my pocket – at the same time, it felt inexplicably liberating too.

But I was stranded. Not a single sen on myself. I couldn’t even go to the bank to withdraw any money as it was a weekend. Moreover, my ATM card had been stolen. Even if the banks were open, I didn’t have any IC either to show the teller staff for identity verification.

Here, I must thank those two guardian angels who materialised while I was in a daze and thrust cash into my hands to tide me over the next few days without my having to ask. You know who you are. Thanks again.

I trudged to the nearest police neighbourhood beat base, which was built a couple of years ago. But I rarely see anyone staffing it of late, and today was no different.

So I headed for the nearest police station to lodge a report, feeling very sorry for myself. Quite a few people were already there waiting for their turn to make a report. In the time I was there, I heard them making reports for:

I thought I was having a dreadful day – until I saw him. The snatch thief suspect, who had been apprehended, crouched behind bars in the police lock-up, largely hidden from public view. I gazed at him and he looked back, a gaunt pitiful look. With his moustache, he looked around 40, perhaps older than his real age, and weary, a lost look in his eyes.

I wondered who his family was and what had happened to his parents and his siblings. Surely, when he was a child, he must have had parents who had dreams for his future. How would they feel if they could see him now in this state, I wondered. What had he gone through in his life for him to land up in this predicament. Suddenly I realised I did not know what “going through a rough time” meant.

I heard the couple, who had complained about the harassment from the Ah Long, telling the cop, “This has been a bad time for us.”

They say God acts in mysterious ways and, sometimes, speaks through the most unexpected channels. The cop replied philosophically, “Sometimes God sends us these things as trials to test us and draw us closer to him.”

He had a point – though coming from a cop, it sounded somewhat surreal.

Musa Hassan stared at me from a portrait on the wall.

I asked a friendly looking cop whether house break-ins were a common occurrence.”Well,” he replied, “today, we have had three cases so far in this area.”

That set me thinking about the crime rate, which appears to be rising by most anecdotal accounts. Could it have something to do with the fact that the gap between the rich and the poor in Malaysia is among the widest in the region – prompting some people to take short cuts, even if illegal, to narrow the gap in the only way they know how?

Or are people just taking the cue from the lack of integrity and accountability at the highest levels, when they see all those financial scandals and the crony capitalism around them? You know, the attitude that says, “If they can do it, why can’t I?”

Or is it some combination of both? 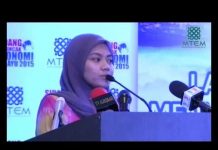 Fading Malaysian dream: Now it is a question of survival

Residents in string of established settlements in Penang face eviction

Really sorry for what happened to you.I was hoping to meet you last Sunday.
You took the the whole incident in a rather phylosophical way, seeing others in more desparate situations,very nice of you.

Can I help you in anyway?Please be free to ask.

Luckily you have not collected the money from me yet,otherwise the burgler would be richer by RM120.

It happens every where, and Malaysians are resigned to this. In my neighbourhood, our neighbours back, side front have all been burglarized at one point or another. When we make a report, we are asked by the Police, is this just for report or do you want us take action. If you want us to take action, you have to go to Simpang Tiga Police Station. Many times because we are fed up, because we know the Police will not take action and to save ourselves the trouble of going to another Police station, we just make a report for… Read more »

Sorry to hear of your misfortune bro. Sometimes, life keeps testing those who are all for goodwill and justice such as yourself. No matter how desperate those burglars and criminals are, I am all for severe punishment to be meted out to those scum. This is why I am all for the true Laws of Allah be upheld and practiced by the authorities. Problem is, sometimes the very criminals come under the cloak of officialdom. Thats why, they shy away from upholding the true laws of the Almighty as they would be among the first to be persecuted! Hope you… Read more »