Since the last general election, the space for press freedom has expanded considerably.

Almost overnight, the electronic and print media shed their political inhibitions, while censorship in many areas dropped, the most noticeable, of course, surrounding the issue of 1MDB. At first, the media appeared uncertain how to navigate the new freedoms, but now they have grown accustomed to them.

Of course, there is much room for even more press freedom. This year, Reporters Without Borders (RSF) ranked Malaysia at 123rd spot in its global press freedom ranking — up 22 places from the previous year and just above Indonesia, which was ranked 124th. Not bad at all, but it should be sobering for us to note that East Timor is now ranked 84th.

Clearly, there is much room for improvement. Repressive laws related to the media — such as the Printing Presses and Publications Act, the Official Secrets Act, the Sedition Act and the Communications and Multimedia Act — have not yet been repealed or amended. All these laws have penalties that hinder freer expression, critical views and whistleblowing. Full article on Aliran website 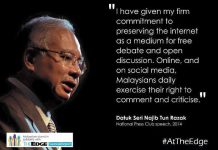 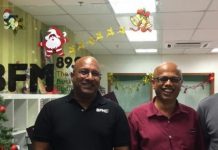 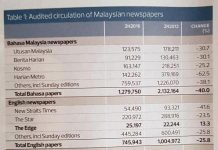 Cannot talk press freedom if you restrict your readers five comments only.

Be open to criticism.

Wow! Truly thick-skinned, like the typical uncivic citizen giving excuses after committing public nuisance. At which other sites do you make this demand?

hehe…fair comment, every sane person sees the hypocrisy in this. they demand transparency, freedom of speech, democracy,blah blah blah from others but never to themselves…

Just like Hong Kong er girl. She complains she can’t write freely if the extradition bill is passed. What a pea brain. So far what has she written? Sudden she becomes Einstein if the bill is not passed?

Hong Kong should embrace the China’s market driven socialism. Already more than 20 years back to China, so must slowly adapt to China’s system (replace Cantanese language with Mandarin) and forget about UK’s democracy. They should see that UK is in the decline while China is on the rise. But I suppose the frustration mostly from young Hong Kong fellows cannot own a home, and envy their rich counterparts who have migrated overseas.

Better have money in pocket than press freedom, else can only kpkb on blogs.

Now economy getting bad. Ringgit going down and price still go up.

Jomo predicts tough time ahead. Time to cari makan can Anil accept me as intern to read and censor nonsence comments?

Haha… things are much better now with the comments.

Malaysia needs to increase its productivity if it is to achieve its goal to become a high-income nation in the next decade, said International Monetary Fund (IMF) managing director Christine Lagarde.
https://www.malaymail.com/news/malaysia/2019/06/24/malaysia-must-increase-productivity-if-it-wants-to-be-high-income-nation-sa/1765040

She said despite the economic success over the past 20 years, Malaysia’s productivity did not grow as much as the country had hoped.

Malaysians should brace for tough times ahead as the economy is facing real problems amid an intractable external situation which is deteriorating almost on a daily basis, warns a prominent economist.

Jomo Kwame Sundaram, a senior adviser at Khazanah Research Institute, said many of these problems are beyond the control of the Malaysian government and the people need to prepare themselves for hard times ahead.

you come to the wrong place, here we don’t talk about economic prosperity, when people get rich they buy cars, travel 100km to find one ton mee, buy many many properties and leave it empty, so it is better that the economy stay weak……….the more economic activities, the more Tu lang will KPKB..so please stay home to do more yoga…the trees will love you…

In the modern day hierarchy of needs of the young generation, smartphone ranks higher than press freedom. Because they do not refer to press for information.

Rafidah, who had lectured in Universiti Malaya in the past, expressed disagreement with the alleged dishonest practice.

KUALA LUMPUR, June 21 ― Automotive firm Naza Quest, textile giant Jakel Trading and popular jeweller Habib Jewels are among 41 recipients that were named by the MACC today as having benefited from scandal-tainted 1MDB.

According to the MACC, the money amounting to RM270 million were allegedly transferred out of 1MDB and funnelled from Najib Razak’s account private bank accounts.

Since money was given away from Najib’s personal bank account, MACC should seek Najib to pay back 1MDB and not to claim from these recipients. Najob should be held accountable and his assets should be seize for this reason.

The following site run by Hussein Hamid in Australia is once again blocked for the last month or so:
https://blog.steadyaku47.com/

Or has it gone defunct?