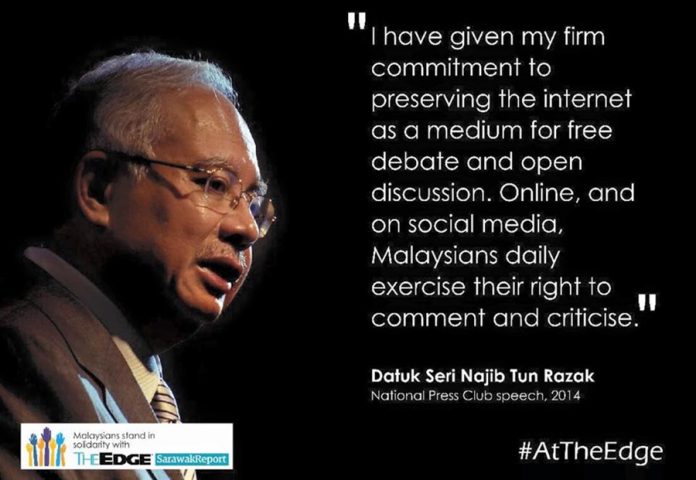 Woke up to the shocking news that the government is mulling a proposal to require online news portals to register under proposed amendments to the cyber laws, expected to be tabled in October.

This seems to be following the model of Singapore, which is ranked no. 153 in Reporters Without Borders press freedom ranking for 2015.

Malaysia is ranked 147. Why would we want to follow a nation with worse press freedom? Do we really want to go backwards? Why not follow Finland, which is ranked No. 1?

Besides, online news portals already have registered companies or societies managing their portals and their journalists already have had to register for official press accreditation cards.

Moreover, the authorities already have a slew of draconian laws which they can use – and have used – against journalists. They have already blocked the Sarawak Report website (albeit not very effectively) and detained The Edge and Malaysian Insider editors.

Journalists must oppose any attempt to further restrict media freedom.

The BN obviously knows that more and more Malaysians are becoming aware of the astounding plunder taking place in the country. Ordinary people can see how politicians have betrayed their trust, how funds have been siphoned from public coffers. The online news media have done an exemplary job in exposing this grand betrayal.

This exposure by the online media has contributed to a steady erosion in support for the BN since the 2004 general election. The BN government realises this.

So now we can expect more restrictions? Concerned Malaysians should say, “NO, enough is enough!”

Why not follow Singapore? LKY had the answer when he said that dictatorships could be justified if it brought benefits like good governance…clean, efficient, with better livelihood for the people, etc. Malaysia cannot claim to be following Singapore only in one aspect – censorship – while wallowing in corruption and a deteriorating socio-economic mess.

Any update on the today’s August 8 rally to support The Edge?

This, unfortunately, is part of a world-wide trend in which freedom of information is increasingly being restricted. ‘Democracy’ means rule by the people (of the people and for the people) but how can the people rule if they don’t know what is being done in their name? Democracy is under threat in many different parts of the world, and in countries that are only partly-democratic, it is in danger of disappearing altogether.

Too many ‘leaders’ quickly forget that they were voted into government as representatives of the people.

Zaid Ibrahim wrote:
Malaysia today is a land of ‘cover-ups’. The government is actively engaging in doing everything in their power to cover up mismanagement, corruption, and abuse of power. The people, especially the opposition leaders and those active in social media today, live in fear of the prime minister and his hatchet men.

Social media is a big threat to BN, as most people no longer trust the mainstream media. Zero faith in NST, Utusan and TV3.

“I have given my firm commitment to preserving the internet as a
medium for free debate & open discussion.”
“Psst! My fat mama must have the internet for online shopping therapy for
coloured diamonds, super brand handbags & avoid-issue oversea holidays”

Some just do not have the intelligence to comprehend thing but instead spurt out LIES that the PM dare not sue. In the WSJ reply, they dare not even give a concrete answer whether it is IMDB fund and did it really go into PM account. They just said its self explanatory. In the article they twist and turn without names and avoid admitting that the fund come from 1MDB and that it enter in PM a/c. Its all in such a vague form that the PM need to be very CAUTIOUS in suing them by seeking opinions not just… Read more »

Like I have said many times there is no such thing as total freedom of rights whatsoever. There need to be some sort of control be it in your daily life, the news media, any institution or even what you say, write or talk.

Even in Anil blog, there is also no total freedom. He has the right to delete or alter and this is call MODERATION. Should we STAND up against him for media freedom that come with NO RESTRICTION ???…….NO, because it will create havoc and disharmony.

There are already more than enough laws in the country. How many more do we need?

You believe he was real?? When asked to comment on Muhiyiddin’s “I am Malay first” his reply was that it was dangerous to have difference with his deputy. BUT when it comes to accounting for 1MDB and US$780m in his account, its not dangerous anymore..

The man is a cheater all his life, nothing is real..That is why his Big Momma got him whipped like a little boy..

It was BN itself that brought in such havoc . As if accusations were false or malicious, they could and can provide solid answers to each mud slinger. If the Umno together with BN dislike the norms of democratic practices or freedom, why not change the system into something else. Afterall,Umno is a very good friend of CPC As to “follow” Singapore’s way, why not? We can have a legal Geylang , RM pegs to the SG Dollar, No more Ketuanan system , No more Chinese or Malay or Tamil or Sekolah Pondok., Auto Visa to Chinese tourist etc but… Read more »

Read the nice-sounding words of Najib from his own blog [lest some apple-polishing loudmouth claims spinning]:

Why dumnos make noise when the Israelis police whack the Palestinians throwing rocks. Case if too much freedom?

Dunggu only. People praise sinkapore as they do not have racial, religious, crony problems. People like ah tee and ah yang would have been napped by sinkapore Mata for stirring the hornest nest rather than letting go wild like wild fire. Too much freedom given to extremists here.

Anil,
You may have to register your blog with the authority soon?

Hope not. That is why we have to oppose and protest such proposals.

Anil, too bad. Ah yang will oppose you as he supports the limitation of freedom and imposition of control. We are dunggu to him to have too much freedom. Control is required.

No need to control, zorro.
Let conscience eats deep into his heart.
Karma is a wonderful law of returns & we are witnessing its course of justice which punishes the misdeeds that spawn misdeeds of unbelievable proportions since the era of MadHatterism of the 80s.
We the commoners will have the last laugh, no need for championing who is powerful, smart or cunning.
If you believe in God, that’s wonderful b’cos Grace is upon you.

The way it goes, on line news portal like anilnettto.com may face indirect pressure to conform to BTN guidelines restricting transparent reporting ?

Yang and his super friends will be conducting certification courses to define what is good what is threats to nation ?

You could say Najib is a very practical and forward looking PM. He repealed the ISA and was on the verge of repealing the Sedition Act. In fact he has given too much leeway and freedom to the opposition but they ABUSE the freedom and rights given. He is doing the right thing. There is a need to have some sort of control. There is no such thing as total freedom. Last year demonstrtaion by the Hong Kong trouble makers blocking road for 3 months is a good example of why there is a need for the ISA and Sedition… Read more »

Yang do you understand English?

Everybody is praising Singapore. Now what is the problem in moving forward like Singapore