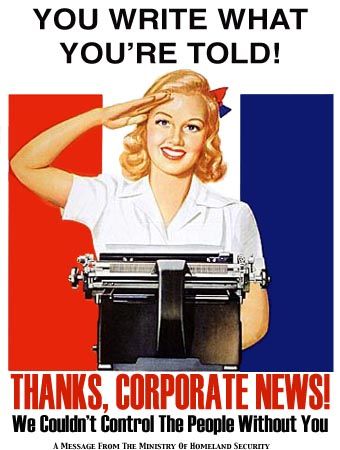 Here’s an excerpt of a brillant must-read article about how the corporate media weeds out and sidelines journalists who think independently and differently (i.e. those who don’t subscribe to their corporate values). It’s written by the Nazareth-based freelance journalist Jonathan Cook. 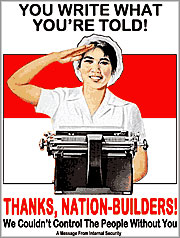 If they are to survive long, writers must quickly learn what the news desk expects of them. Newcomers are given a small amount of leeway to adopt angles that are “not suitable”. But they are also expected to learn quickly why such articles are unsuitable and not to propose similar reports again.

The advantage of this system is that high-profile sackings are a great rarity. Editors hardly ever need to bare their teeth against an established journalist because few make it to senior positions unless they have already learnt how to toe the line.

The media’s lengthy filtering system means that it is many years before the great majority of journalists get the chance to write with any degree of freedom for a national newspaper, and they must first have proved their “good judgment” many times over to a variety of senior editors. Most have been let go long before they would ever be in a position to influence the paper’s coverage.

Journalists, of course, see this lengthy process of recruitment as necessary to filter for “quality” rather than to remove those who fail to conform or whose reporting threatens powerful elites. The media are supposedly applying professional standards to find those deserving enough to reach the highest ranks of journalism.

But, of course, these goals – finding the best, and weeding out the non-team players – are not contradictory. The system does promote outstanding “professional” journalists, but it ensures that they also subscribe to orthodox views of what journalism is there to do. The effect is that the media identify the best propagandists to promote their corporate values.

Cook is writing about his experience in the UK press, but I am sure a somewhat similar process of ensuring that journalists absorb the “corporate values” of their respective media organisations occurs here in Malaysia as well. If Malaysian journalists don’t consciously try to second-guess the slant their editors and the owners of the corporate media organisations would prefer and adopt their values, then these journalists are not likely to “make it”. If they do, then they are likely to be rewarded with fat salaries, perks and bonuses (six months bonus, for instance – ring a bell?).

So in the end, the journalism we see in the mainstream media on the whole tends to reflect the “corporate values” (and political affiliations) of their owners, chief editors (and let’s not forget the advertisers) rather than the interests of the ordinary people. Check out Cook’s full article here.

Perhaps local journalists can share with us some of their experiences of the “filtering” process in Malaysia in the comments below.

Simon, I’m just saying that even if the British press is not as free as it’s made out to be, they’re still light years away from our so called press freedom. Remember the article on the possible risks of wifi by the Independent, which Anil pointed out not so long ago?

I’m all for people like Jonathan Cook. The more the merrier. Let’s screw the establishment.

It’s just like when some politicians make the lame excuse that corruption exists the world over. Does that excuse their own corrupt practices?

Haha ! Anil, good one. You have just given is the very answer why “bloggerism” is slowly replacing mainstream media journalism.

The word “corporate” itself is a dead giveaway! I’ve had enough run-ins with the “corporate mentality” over so many decades I’d have thought anybody with even a grain of brain inside their skulls would avoid joining big corporations and signing over their souls. But those parasites have traditionally controlled the resources, as well as the means of production, by dint of their support of and genetic links with bully-boy monarchs. It is our moral duty to learn the real story,/a> behind the manufacture of the Adamic race (Homo sapiens) to serve as menial workers for the so-called gods.

I’d like to give you a Butterfly Award for being one of the coolest blogs I know. It’s ok if you might not want to receive it. I’d just like you to know that I enjoy reading your blog.

Have a nice day.

RPK – You’ve got Friends! http://iwfrpk.blogspot.com/2008/10/rpk-youve-got-friends.html Candle-light Vigil in PJ on this Sunday, 12th October Venue: Padang in front of Amcorp Mall, next to A&W Restaurant, Petaling Jaya (Google Map) Time: 8pm Date: Sunday, 12th October, 2008 Come one, come all. Please bring along your own candles (red & yellow) & wear your RPK t-shirts. T-shirts will be available for sale on-site subject to stock availability. Let’s show our support to RPK & family, and all of the ISA detainees. Supporters of RPK & Malaysia-Today === You’ve Got a Friend When you’re down and troubled and you need a helping… Read more »

$ingapore’s government calls them nation-builders. Here’s our Asian version of this poster. Check it out

Everyday people like RPK, you and me – we change the course of history

You are absolutely right. For one, the English is the bigget hypocrite in the world. While expounding the concept of free press on one hand, they are the biggest practitioner of guided press.

Malaysia learned from the master of the trade.

Mainstream media in most countries are controlled by big corporations and politicians.

The media in every country is controlled by big corporations and politicians.

It’s interesting to see how Michael Moore critisizes CNN on live TV in this video:

The Independent, Times and Guardian?
Have you heard that half a truth is like half a brick? When you throw it, it goes much much farther.
Holy s***, some people prefer Jonathan Cook to be washing dishes. I am thankful that there is a Jonathan Cook among the British, though my brother Andrew doesn’t seem to agree.

“Cook was writing about the British press.”
The brits were already the world’s master thief before the americans even learned to walk. And they still are. Many Malaysians seem too gullible about this fact.

If you compare the NST and the Star, the content is the same. If you’ve read one, you’ve read them all. Why bother having two of the same?

On the other hand, try comparing, say, the Independent, the Times and the Guardian.

Originality of thought is, unfortunately, not one of our strong points.

That is exactly why i have stop buying any newspaper long long ago. the daily news is expected to be the same. i was so frustrated last time when i was reading news with title like “MP involves in etc…” read until the end also i couldn’t find who is the said MP. I can understand if the title without name can be catchy, but till the end also didn’t reveal the identity, it doesn’t makes any deferences before and after reading the news. Whats more now, with internet, all the news is real time instead of history publish in… Read more »

Hi everyone, The MSM all over the world are the same, with practically no exception. They differ only in the extent of the twists and slants. This is the main reason why people access alternative news media – the internet – for a more balance and also almost real time news as well! As more and more people are made aware of such corporate and political propagandist, the alternative media becomes more and more popular. Though the internet news coverage is not without its slants as well, the people can access views from both sides of the coin on any… Read more »

Good one Anil! Here is a cool photo that goes along with this post:
http://homepage.mac.com/leperous/.Pictures/reporter.jpg