Berita Kampus, the USM communications lab newspaper, was temporarily held back yesterday after a farewell profile on highly regarded media lecturer Dr Mustafa K Anuar appeared. For some reason, the School of Communication had a change of heart and released the newspaper yesterday evening just as the news was beginning to spread on social media. 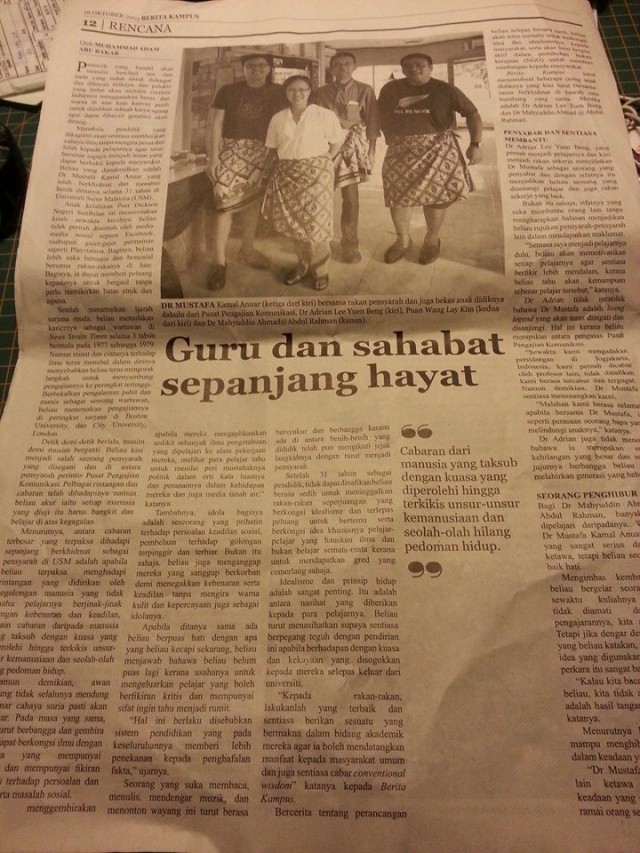 The profile featured interviews with students, colleagues and peers.

News that the newspaper had been held back (before later being released) spread on Facebook.

Never had my birthday been so memorable and challenging at the same time. I had my former students, who are now academics as well as the present students who celebrated my birthday with me with so much fanfare and fun. And on the very same day censorship, a practice I deplore vehemently, was imposed on Berita Kampus simply because it contained an interview with me which supposedly had certain elements that were ‘problematic’ to the powers-that-be.

There goes one of the foremost media academics in Malaysia in a cloud of controversy.

I was asked to contribute to the profile but my contribution came too late to make it to print.

This is what I would have written:

Mustafa has inspired countless media and communications students over the years and has been a passionate advocate for a free and independent press. During his time and together with the efforts of his colleagues, the USM School of Communication rose to prominence as one of the premier media schools in the region. Today, many of Mustafa’s former students are among the leading independent and investigative journalists in the country.

Not only that, Mustafa is one of the most prominent Malaysians in the country for his inclusive outlook and abhorrence of injustice. Much loved by his students, past and present, the soft-spoken academic is a genuine Malaysian in the most positive sense, building bridges across people of all ethnic and religious backgrounds. He did not let his employment with the university stop him from speaking out vocally on the issues that matter in Malaysian society. USM has lost a remarkable academic and true Malaysian.

Ambiga: Invest in free media for a healthy democracy

Mus will no doubt continue to contribute to Malaysian society in his capacity as a public
intellectual.

I have a very close relationship with USM. My mom went there as a student in the 60’s and became a lecturer till she retired in 2000. I pretty much grew up there. Our first house was in USM, which is now the “Galeri Arkeologi”. USM in the 80s was still a pretty vibrant place. The lecturers were very different then..very vocal, very expressive and very multi-racial. The 90s was still pretty cool too but I remember seeing a change in the system. People who were of the “right” race were promoted over those who had better qualifications…I got the… Read more »

The comm department in USM is evidently shortsighted. Malaysian j-schools badly need media academics experienced in fighting for media reforms, engaged with industry practice, and a track record in media research. Mustafa is one of the few respectable media academics in Malaysia who continue to contribute to the national conversation. Best wishes Mus as you move on to bigger things.

Thanks for this tribute to a jolly good fellow in all ways – a true human being and bona fide scholar who once honored me with a most enjoyable visit. Totally laudable and lovable academic, my friend Mus!

A very Happy Birthday to you Dr Mustafa K Anuar!

Happy retirement as well, though I know that you would continue to contribute your civic consciousness to society! The first time I came to know of you was when I attended your wedding at least some 30 years ago on the invitation by your other half! As long as there is injustice I know you would be at the forefront ‘fighting’ it! All the best to you in whatever cause you undertake and continue to undertake, and send my best regards to your other half as well!

never too late. esp with internet!