Here’s something that could be a drawcard for visitors to Penang. Few Malaysians are aware that the man who gave Indonesia its name lies buried in Malaysia – in Penang to be specific.

James Richardson Logan, the man who coined the name ‘Indonesia’ in the 19th century, lies buried in the Protestant cemetery in Penang – Photos by Anil Netto 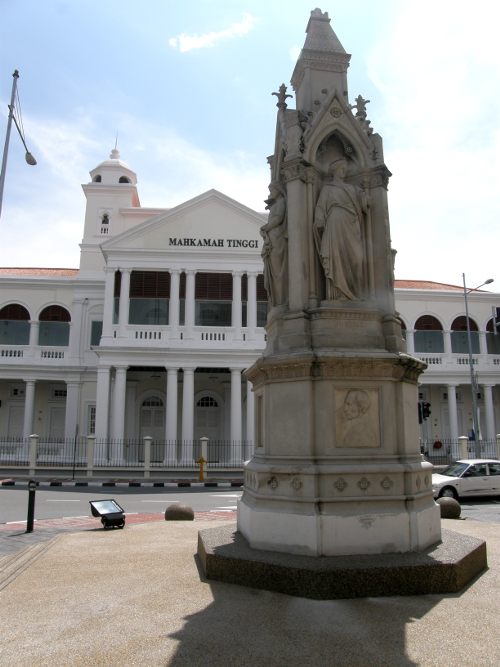 I did not realise it myself until Indonesia’s blogger of the year 2007, Andreas Harsono, alerted me to it.

Logan was born in Berwickshire, Scotland, in 1819 and studied law in Edinburgh. Arriving in Malaya when he was just 20, he was later viewed by segments of the non-European local communities as a champion of their rights. He was editor of the Penang Gazette and the 27-volume Journal of the Indian Archipelago and Eastern Asia, which were also called Logan’s Journals. The Logan Memorial (pic above) describes him as “an erudite and skillful lawyer, an eminent scientific ethnologist and he has founded a literature for these settlements…” He died of malaria in 1869 – a passing the Memorial describes as a “public calamity”.

The word `Indonesia’ was first manufactured in 1850 in the form `Indunesians’ by the English traveller and social observer George Samuel Windsor Earl. He was searching for an ethnographic term to describe `that branch of the Polynesian race inhabiting the Indian Archipelago’, or `the brown races of the Indian Archipelago’. But, having coined his new term, he immediately rejected it – it was `too general’ – in favour of what he deemed to be a more specific descriptor, `Malayunesians’.

A colleague, James Logan, undeterred by Earl’s decision, decided that `Indonesian’ was in fact a more telling and correct usage, to be employed primarily as a geographical rather than an ethnographic term:

His use of `Indonesia’ was not immediately followed. Only in 1877 did E. T. Hamy, a French anthropologist, employ the word `Indonesians’ to describe specific prehistoric and `pre-Malay’ racial groups within the archipelago. In 1880, the British anthropologist A. H. Keane followed Hamy’s usage. In the same year, a more properly geographical sense of the term, along Logan’s lines, was employed by a British linguist, N. B. Dennys, a practice adopted by W. E. Maxwell two years later.3  Adolf Bastian, the famed German ethnographer, well apprised of Logan’s earlier use of the term, employed the term in his five-volume Indonesien oder die Inseln des Malayischen Archipel, published in 1884–94.4 Given Bastian’s scholarly eminence, his adoption of the term gave it a previously unknown respectability.

But it was only in the 20th century that the term “Indonesia” gradually gained more popular acceptance including among groups opposing Dutch colonial rule.

nice to know whose give my country name,do you have his picture?

Whats the exact page number of that except from The Idea of Indonesia – A History – by R. E. Elson, please? I just want to follow up on some research. Thank you!

Kunta Kinte Not related to Joon Nam. Kyshe reports are difficult to get. The one I read can be found at Messrs Kumar Partnership, advocate and Solicitors KL. Call them up or write to them officially and ask if you may go to their library and read the Kyshe reports. You can also make photocopies of particular cases on payment of charges to them. The partners may not know the books exists ask the librarian Jothi. Logan pose this question to the Judges in penang that if UK was invaded and occupied by a tyrannical and cruelly oppresive nation wouldn’t… Read more »

Just because they were British or colonial officers doesn’t mean many of those who served with distinction were not men or officials who were held in the highest esteem by the locals.

I am glad that Penang state under successive governments resisted attempts by many so called nationalists who fought to rename every road to Malayans or Malaysians.

Wow.. this is just near my office (at green hall). Didn’t know there was so much significance.

Mak Jun Yeen, are you related to Mak Joon Nam?

And it will be nice if you can tell us where to get the Kyshe reports.

Logan, in his time, was a proliflic writer. Yes, Logan Road is named after him because of his contributions in making Penang known to the West.

Penang was known as “Pinang” when it belonged to Siam.

CAN ANYONE PROVIDE ME WITH THE LATEST WEB ADDRESS OF RPK MALAYSIA TODAY SITE. CANT ACCESS IT THIS MORNING.

The Penang Bar fought a hard battle to preserve the memorial to Logan as our amnesiac ultra nationalistic bureaucrats thought Logan was some reviled colonialist.

Logan was one of the forerunners of Karpal Singh who thumbed his main digit at the nostrils of people in authority and their interest.

One if able, must read his impassionate plea for the case of the Kedahan prince who was charged with piracy when in actual fact he was leading a liberation war on the Thais who brutally subjugated his country. The case is reported in the Kyshe reports.

Our Education Minister…? Why was he given that title for…?
Mmmm….. Guess he’s too busy waving the keris & shouting & screaming at ceramahs……….!!!

What are the students learning nowadays, I wonder…..?????
Morals..?? Forget it. Our politicians don’t even have morals. What makes you think the educator has the qualifications for it too….??

Only just talk. No action….!
Don’t have to go so far. Look at S’pore. Whoever can afford are sending their child there. Mine will go overseas before being drafted for NS..!

Aaahhh…. NS is something I wanna bitch about.
Next time….

thank you for updating on Penang. I love my hometown a lot but I’ve been away for too long to know whats happening. I didn’t know we have a new Mahkamah Tinggi until I saw your photo!

by the way, there is a road named after James Richardson Logan, it’s called Logan Road at Loh Guan Lai Hospital.

Very intriguing and interesting. How many of us Malaysians and Indonesions themselves know about him??? Hopefully he wont be forgotten as everyone knows Malaysian history thought in schools is not complete and also not the full truth. He should be made known.

This is interesting. never know that the creator of “Indonesia” is buried in Penang. Soon, more Indonesian will flock to Penang.