Seberang Perai or Province Wellesley has a rich history which has not often been shared with a wider audience. 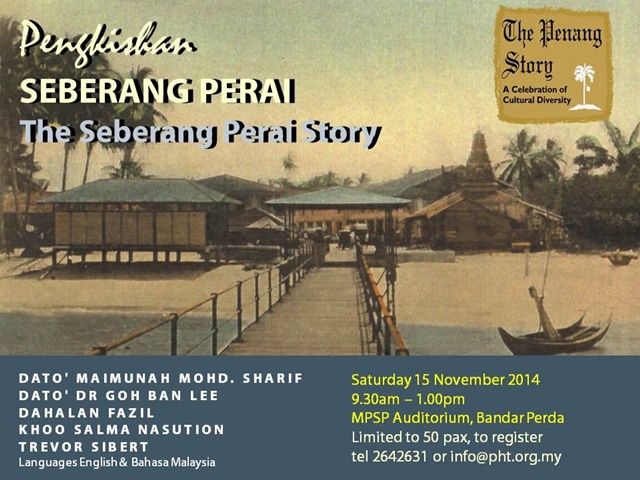 Did you know that Perai got its name from the Prye River, where an early settlement sprouted, that sugar cane was widely cultivated and milled on the mainland strip, and that elephants formed an early mode of transport (hence Jalan Kampung Gajah in Butterworth)?

That many fishing villages dotted the coastline on the mainland, providing fresh fish to a growing population? (Sadly, these sources of fish are vanishing due to pollution and siltation from massive land reclamation.)

Did you know that people were beheaded in public view by the much-feared Japanese chief of police in Butterworth, Suzuki – near the ferry terminal, near the Prai River and in Bagan, and their blackened heads were also displayed on the pontoon bridge and in the centre of Butterworth town? That the site of the Japanese police headquarters in Butterworth lies just across from the Convent Secondary School in Butterworth?

Did you know that the influence of the historical Bujang Valley kingdom around Merbok in Kedah may have extended southwards right up to the present day Bukit Mertajam area, hence the Cherok Tok Kun relics including a little known large rock bearing an ancient Sanskrit inscription on the grounds of the St Anne’s Church?

(Share with us your own snippets of the history of Seberang Perai in the comments section below.)

More importantly, Seberang Perai has a history of harmonious cultural and religious diversity as well. There are lessons to be learned from the past.

I phoned PHT just now and they said you don’t have to register for the colloquium tomorrow; plenty of space available, just turn up. But note there is a fee for non-PHT members of RM20. All proceeds to the Penang Heritage Trust.

Okay, here is the write up from the organisers:

Members of the public are invited to attend this colloquium. For Penang Heritage Trust members RM10. Non-members RM 20. “Youth” below 35 years old, half-price. Refreshments and lunch will be served. The talks will be in English and Malay.

“From Pinang one sees its broad stretches of bright green sugar-cane and the chimneys of its sugar factories, and it grows rice and cocoa-nuts, and is actually more populous than Pinang or Malacca,” wrote Isabella Bird in The Golden Chersonese and The Way Thither (1883).

The Seberang Perai Story will be held at the MPSP auditorium on Saturday 15 November, organised by the Penang Heritage Trust and supported by MPSP and Think City Sdn Bhd.

Encik Dahalan bin Fazil will give “A brief Account of The History and Heritage of Seberang Perai”, which is gleaned from oral history, physical evidence and comparison of old maps. Starting from archaeological sites such as Guar Kepah, he will talk about how Province Wellesley, which was part of Kedah, was annexed to the British Straits Settlements, the impact of the Kedah-Siam War (1821–1842) also called the ‘Whispering Enemy’ War, the establishment of new agricultural settlements in Seberang Perai, early secular and Islamic education, the growth of trades such as blacksmithing and house-building, and prominent personalities of Seberang Perai.

Khoo Salma Nasution will give a presentation entitled “From Sugar to Rubber: The Agricultural Development of Seberang Perai”. Seberang Perai, also known as Province Wellesley, has been the rice bowl of Penang state, with the local Malay population being the main padi-planters. They were joined by Chinese cash-croppers and European managers of plantations worked by indentured Indian labour, producing sugar-cane, coconut, tapioca and a variety of other crops. By the turn of the twentieth century, agriculture in Seberang Perai was well developed and thickly settled by a population of seasoned cultivators. The conditions were therefore ripe for Seberang Perai to be transformed by the arrival of the rubber boom.

Trevor Sibert will speak on “The Eurasians in Penang and Province Wellesley”. Captain Francis Light gave the Catholics in George Town a piece of land bounded today by Pitt Street, Bishop Street, China Street and Church Street. They landed on the island the 15th of August 1786, which is known to Catholics as the Feast of the Assumption. As the years passed, there were more and more Eurasians moving over to the mainland, previously known as Province Wellesley, now Seberang Perai.

SPEAKERS at The Seberang Perai Story

Puan Maimunah Binti Mohd. Sharif
Puan Maimunah is the Yang DiPertua Majlis Perbandaran Seberang Perai. She was recently named Planner of the Year 2014 by the Malaysian Institute of Planners for her remakable and outstanding achievements both nationally and globally.

Dato’ Dr Goh Ban Lee (Moderator)
Dr. Goh is a columnist for the Sun newspaper in Malaysia. His work focuses on issues of urban governance, housing and urban planning. He holds Bachelor’s and Master’s degrees from USM and PhD from the University of California Los Angeles. Formerly a lecturer at USM, he was also a Vice Principle of Tunku Abdul Rahman College. He served as member of the National Economic Consultative Council (1989–1991) and councillor in Penang Island Municipal Council (1989–1995), and was involved in projects run by the Urban Management Program of United Nations Asian Pacific region and Asian Productivity Organisation.

Dahalan Bin Fazil
Dahalan was formerly Penang state Deputy Director of Agricultural Department (2000–2002), as well as Landscape Architect and Assistant Director of Town Planning of Seberang Perai Town Council (2002–2008). He is very passionate on Seberang Perai’s history, and is carrying out historical research for the book “Seberang Perai Pictorial History”. He has been appointed as history consultant for “Seberang Perai’s Heritage Inventory Survey”.

Khoo Salma Nasution
Khoo Salma is an author, social historian and heritage advocate. She is currently President of the Penang Heritage Trust. She is also a writer and publisher with Areca Books. She has authored a number of books on Penang, including The Streets of George Town, Penang (1993), Penang Postcard Collection (2003) and The Chulia in Penang (2014) and she has also co-authored two books on Perak.

Trevor Sibert
Living in historic Malacca for five years spurred Penang boy Trevor Sibert’s interest in history, heritage and culture. He joined the Penang Heritage Trust in his early twenties. Of Eurasian descent, Trevor is very interested in architecture and furniture restoration and is an antique collector. He believes, “We are only borrowing Penang from future generations.” He is also the editor of the PHT newsletter.

About Penang Story
The Penang Story Initiative was started in 2001 by Penang Heritage Trust and jointly organized by Star Publications with the support of various stakeholders. With the UNESCO WHS Inscription in 2008 and the growing awareness about cultural heritage issues, the new chapter of the Penang Story, Penang in Global History, continues to celebrate cultural diversity and has expanded to include a re-discovery of Penang’s place in local, regional and global history. The public lecture will bring together various scholars from all over the world to share their research on a particular subject of interest.

Thanks Mr Anilnetto….for the enhancement of the significance of Seberang Perai History as part of Penang heritage and historical values…………

And thanks Dahalan for the enlightening talk at the forum. Do keep in touch.

Exactly no more whining and whining. The earth will not stop for us but we can stop for the earth

Yes, Dorai, agree with you absolutely.

No point groaning and mourning, the earth will not stop for us.

Good to see that CM LGE said that the Penang government’s annual administrative expenditure rose from 2008 to 2013 because the state was spending on the people. Among the projects are aid for education; welfare; and the yearly aid given to senior citizens, single mothers, newborns and taxi drivers. Lim also said accusations that the state had been selling land to generate revenue were not true. He said if a comparison was made, the previous Barisan Nasional (BN) government sold 35 times more land than the Pakatan Rakyat government. Among the biggest plots sold during BN’s time were 980 acres… Read more »

Where are the CAT’ s phobias ??? They have got nothing to say now.

110 acres in Tg Tokong has already been hijacked and swapped we have yet to see the light of the tunnel. And we have still 1000 more acres waiting for swapping and the developers is now happily making substantial profits for a tunnel yet to be built. We may not even be able to see the light of the tunnel. And this is only one small part of the many deceits you have yet to see. And we have one stupid senile fool that want to ask us where is the CATs phobia. Something worse is in store for us… Read more »

Yes be very afraid ; 18th century guillotine for hudud in Kelantan?
The Kelantan state government might resort to 18th century capital punishment equipment, the guillotine, to carry out punishments under the hudud law in order to avoid having to use surgeons to amputate limbs, a report in The Star stated today.

Are MCA, MIC and Gerakan are supporting the BN’s plan to set up a Shariah federal court which carries the same powers as the civil Federal court?

Are you Donald Anamalai, a former teacher in Alor Star who used to reside in Jalan Kampung Perak?

If so, my son was your former student. I was told you preach Christianity outside school hours.

Those who find Penang too cosmopolitan to their liking has the option of settling in Perai for lower cost of living away from the hustle and bustle of city life, without having to lose the status as a Penangite.

Now the typical penang-lang must have paradigm shift in thinking. Penang is not solely the island but Perai, Seberang Jaya, Juru etc are also associated with the title bestowed. A recent survey showed that a Malaysian household income of RM5K can now afford a new home of not more than RM350K. Since 72K affordable home “yang dahulukala” a distant memory now we ought to be realistic if there’s need to shift to mainland Penang. Those who miss the boat past 2 years i am afraid Butterworth now a costly investment now that the developers are also building condos instaed of… Read more »

Fascinated by this useful feedback about Sebrang Perai. Lived there in my childhood.