St Michael’s Institution in Ipoh in the late 1940s, just a few years after the Japanese had occupied the school during the Second World War. 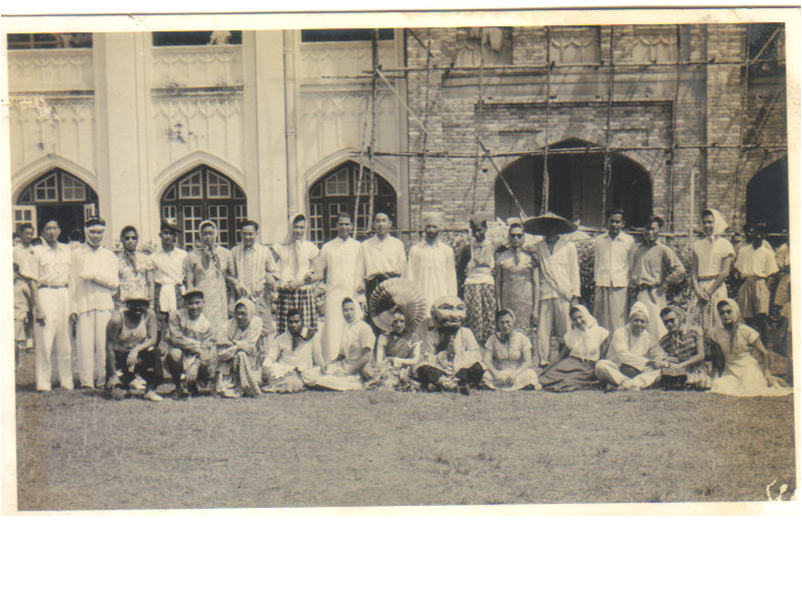 Thanks to blog reader Lee Kam Choon, now in his eighties, for sending this in. Does anyone recognise any of these people here?

Fancy-dress contests such as this were then the vogue in schools throughout Malaya and Singapore.

St Michael’s Institution started operations on 4 December 1912 in a Malay-style bungalow at the lawn in front of the present-day building.

During the war years, the Japanese used the school, along with the governor’s residence, as an administrative centre. The brothers in the school were subjected to repeated Kempetai interrogation, and three Ipoh-based brothers were sent to jail.

Luminaries in the post-war period include Bro Pius Kelly, Bro Ultan Paul Rosario (who passed away a few years ago) and Bro Vincent Corkery. Corkery, who served two stints as brother director in 1972-75 and 1986-88, still resides at St Michael’s.

I had the privilege of meeting Bro Paul and Bro Vincent – legends of St Michael’s – both warm, impressive and well-read characters. Their sacrifices will always be remembered.

This photograph is taken when the final extension at the left wing (behind the school hall) was being carried out. As of my knowledge, the final extensions at both wings of the building was completed in 1952, thus completing the full length of the main building. It was during the era of Bro Denis. This photograph is indeed a very rare photo. I have a lot of photos on SMI but not this piece. Can i have Mr Lee Kam Choon’s contact? May i use it in the publication of our Centennial Book? Due acknowledgement will be made.

St Michael’s Instituition, Ipoh will be celebrating their 100th year next year. Go to http://peterkhiew.blogspot.com/ for latest updates and news from the school. Incidently, Peter is also a teacher in the school. Former Michaelians don’t miss out on this once in a lifetime event!

These missionaries are really the national heroes and the deceitful and corrupted Umnoputras claimed him to be. These missionaries are real heroes to have educated many of the leaders of this country. Of course to claim the missionaries are heroes they don’t score any political mileage whereas a photographer got killed by a strayed and friendly bullet is and even the P.M. cut short his family holiday in Perth and flew back to ensure that he too is getting his share of the limelight and most important of all his share of the political mileage. No way he will cut… Read more »

Yes it brought back old memories. I squatted in the boarders’ quarters in early ’50, representing St Paul’s Inst. hockey team played against St Michael. Of course we won!! It was a wonderful experience to share the same wave line as La Salleans. Sad that these Institutions and the old guards will soon be the things of the past and never to be experienced by the younger ones.